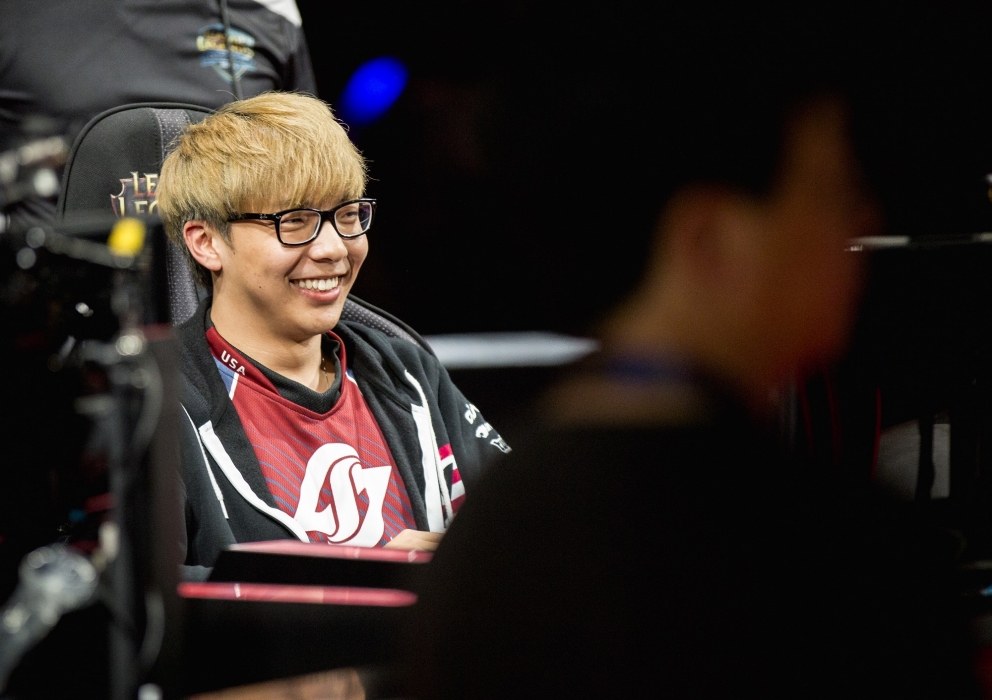 North American fans have been floored as Counter Logic Gaming’s rookie ad carry Trevor “Stixxay” Hayes continues to improve at the 2016 Mid-Season Invitational. But between the drama surrounding the departure of former franchise ad carry Yiliang “Doublelift” Peng to rivals Team SoloMid and Stixxay’s subsequent evolution into a team fighting threat, it is easy to forget that leading up to the 2016 summer split, reigning North American champions CLG made another crucial roster swap in the mid lane. Swapping veteran mid laner Eugene “Pobelter” Park out for Choi “Huhi” Jae-hyun has been just as, if not more, important in developing the team’s Season 6 domestic and international success.

However, it didn’t always look that way. While Pobelter was just been a role player on CLG, his consistent laning phase and high damage champion pool played a critical role in allowing his teammates to focus on other parts of the map. On Fusion, Huhi commanded the lion’s share of resources and jungle ganks. At first glance, his high variance playstyle seemed to be a poor fit for the oft bot lane centric CLG.

However, Huhi has become a key role player much like Pobelter before him. But where Pobelter acted as a tertiary damage source, Huhi looks to create pressure and zones of control. Huhi’s play has been integral to CLG’s Season 6 success. For fans to better understand the new iteration of CLG, it’s important to first understand just how different Huhi and Pobelter are in terms of playstyle, team synergy and “x-factor” potential.

Perhaps the chief differences between these two mid laners are their respective approaches to the game: Pobelter, a calculated damage source, and Huhi, a pressure creating roamer.

Pobelter’s greater approach to the game is reflected in his laning phase, which could, on his most recent teams, be best described as nondescript, but reliable. On CLG, Pobelter frequently played champions such as Azir or even AP Kog’Maw, so as to provide consistent backline poke damage. On IMT, this trend continued as Pobelter frequently brought out Lux, yet another high damage pick with a lot of safety. On these champions, Pobelter focuses on going even on the laning phase so as to scale into a late game damage threat.

Although the Immortals mid laner rarely makes the same gamechanging plays as star players like Bjergsen, he is still able to contribute a high amount of damage simply due to his champion selection. Because of this, Pobelter is the perfect fit as a tertiary carry on teams like S5 CLG or IMT, which place a high focus on their top and bottom lanes. However, the weakness of Pobelter’s playstyle is that he requires his teammates to make up for his lack of map pressure. It’s no a mistake that his most successful career periods have come alongside ace early game players such as Huni, Darshan, Doublelift, aphromoo, and ReignOver.

Huhi’s strengths are the opposite of Pobelter’s. Where Pobelter prefers safe mage or poke-based picks, Huhi loves playing risky champions. Some of his most prominent picks this regular season included assassins like Zed and LeBlanc. Huhi has also taken even greater risks by playing underused champions, such as mid lane Ekko and Aurelion Sol. He was also one of the first North American players to bring Ryze back into the mid lane. While these champions don’t deal nearly as much safe damage as Pobelter’s picks, they boast immense amounts of lane and teamfight pressure.

Huhi’s role in drawing attention is particularly important due to the absence of Doublelift. In previous seasons, Doublelift would play an important role in drawing lane pressure for CLG, with his aggression often baiting out crowd control. Although Doublelift was able to carry many fights for CLG due to his teamfight mechanics and kiting, an early teamfight mistake by Doublelift almost immediately led to a lost teamfight for CLG. On the new CLG, Huhi is focused on baiting his opponents and leaving Stixxay to focus on dealing damage, a much safer distribution of labor that has greatly improved CLG’s teamfighting.

Partnering with Aphromoo and Xmithie

Of course, Huhi isn’t creating this pressure on his own. One of the most notable storylines for CLG this season has been the continued growth of Zaqueri “aphromoo” Black and Jake “Xmithie” Puchero. Although aphromoo has often been one of the most well respected supports in his region, his play this split has made him the consensus best support in NA and likely the best support in the West. Meanwhile, Xmithe has continued to go redefine his strengths each season with CLG, recapturing much of his Season 3 form.

A significant part of both player’s improvement has been enabled by more roam-heavy mid laner, who is willing to back up their skirmish oriented playstyle. In previous splits, the player who most often partnered with aphromoo on roams was actually his bot lane partner Doublelift. Picking up bursty champions, like Lucian or Tristana, Doublelift would often roam with aphromoo to pick off straggling opponents or sabotage lane swaps.

In this way, the introduction of Huhi has once again helped the team deal with the loss of Doublelift, while shifting their farm and role priorities to more traditional distributions. Huhi’s roam heavy playstyle is much more intuitive than sending the AD Carry abroad. With Huhi’s pressure across the map, Stixxay is then able to take over wave clear and pushing duties in the mid-lane, allowing the ad carry to scale safely into a teamfighting threat. This mid lane pressure gives Xmithie and aphromoo more freedom than they ever had on the previous CLG teams and enables much of their new found forms.

Huhi is a great stylistic fit for CLG. He both unlocks his star team mate’s potential via his roams and shores up some of the holes that would have otherwise gone unfilled with the loss of Doublelift. But on top of filling these crucial roles, Huhi’s personal game is also ripe for improvement and playmaking.

It’s important to note that Huhi has grown exponentially over the course of the 2016 Spring Split. Where his early season performance was marred with needless deaths in lane and unfortunate overaggression in teamfights, Huhi has begun to control his bloodthirsty instincts. But, Huhi still can stand to improve in these areas. While Huhi has been able to stand tall at MSI against international competition, his deaths are often the results of his own overaggression without vision, rather than his opponents outplaying him.

For a long time, Huhi’s fans have compared the mid laner’s growing explosive potential to star players like Bjergsen or Incarnati0n in the hopes that he can imitate a similar high-resource high-carry playstyle. Locodoco infamously referred to Huhi as “scrim Faker” in his ‘Loco Let’s Loose’ video series, claiming that the player’s high carry potential in scrimmages was a big part of his acceptance by CLG.

But a closer analysis of Huhi’s playstyle reveals that his competitive destiny is much closer to that of Faker’s greatest rival: EDG mid laner PawN. Huhi boasts a wide champion pool, a strong ability to draw pressure in lane, and great synergy with his jungler and support. PawN was able to become one of the greatest mid laners of all time by adopting a high pressure mid lane playstyle and accepting a low econ role on his teams. Although Huhi ranks far behind PawN, especially when it comes to the laning phase, his attitude and playstyle greatly resembles the all-time great mid laner’s.

If Huhi keeps improving along this route, CLG will likewise continue to grow as an international threat.