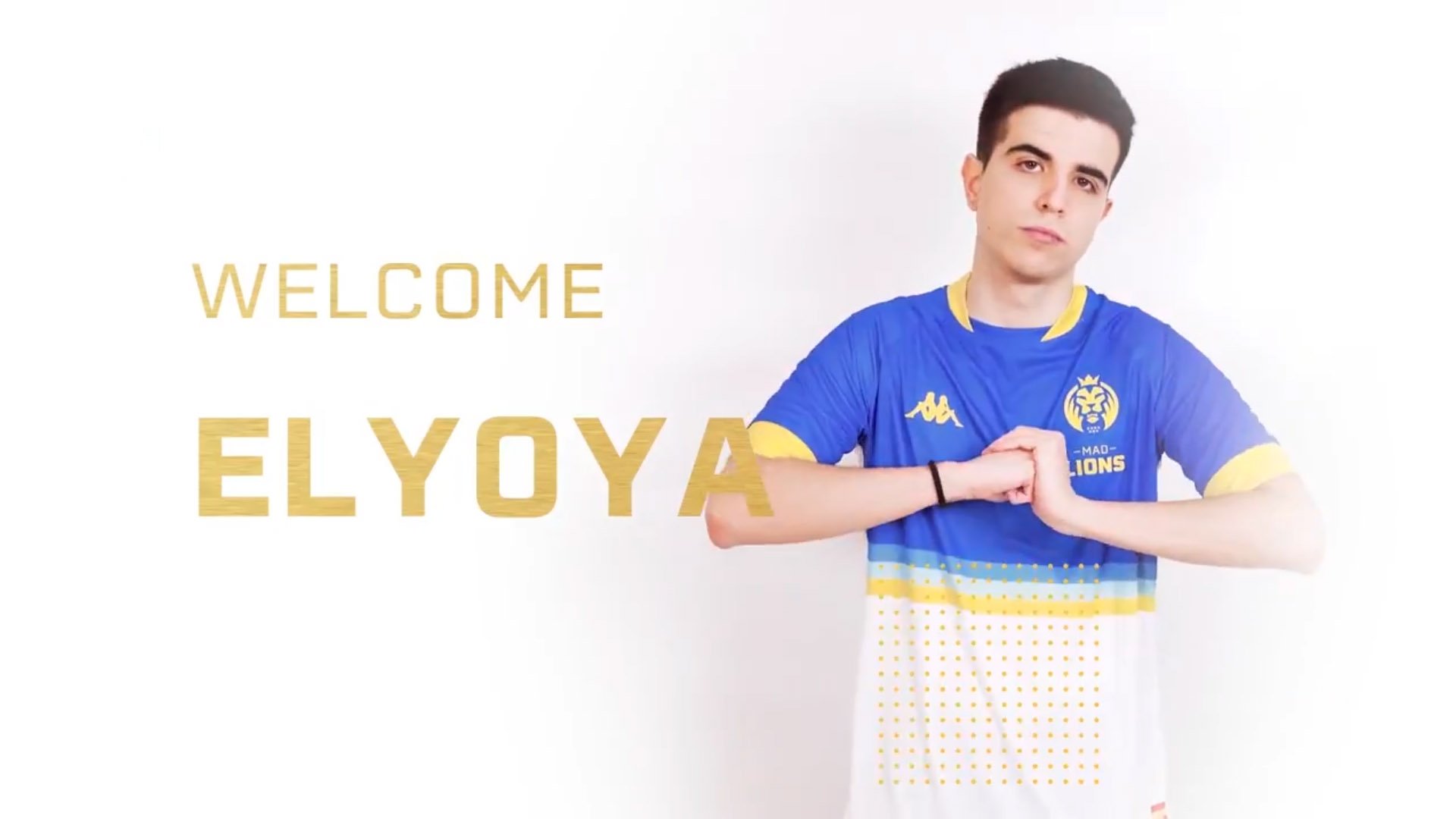 MAD Lions were one of the main contenders in the LEC across 2020.

The League of Legends team found success, finishing the Spring Split playoffs in third place and coming in second in the regular season of the Summer Split. The organization qualified for the World Championship for the first time, but the year didn’t end as they might’ve expected. MAD Lions were the first EU representative that didn’t make it out of the play-in stage, which led to the team making changes during the offseason.

While mid laner Humanoid, ADC Carzzy, and support Kaiser stayed on MAD Lions, top laner Orome and jungler Shad0w parted ways with the team. To fill those positions, MAD signed top laner Armut from SuperMassive and Elyoya, the former jungler of Movistar Riders and one of the Superliga Orange’s best talents, for the 2021 season.

Elyoya’s journey to becoming a LEC player was a bit unusual, though. In one year, he’s gone from the Spanish amateur scene to the biggest European competition. The jungler joined Movistar Riders Academy in July 2019 and improved the League team. Thanks to him, the secondary team of the organization started winning tournaments, like the Madrid Open Cup. And Riders’ management was aware of who was contributing to that success.

“I was playing really well, the team was interested in me and it coincided that Riders’ main jungler was injured,” Elyoya told Dot Esports. The main team gave him a chance in November 2019 at the Iberian Cup, the final tournament of the Spanish national circuit. And once they saw how hard he worked, they trusted him enough to add him to its starting roster in 2020.

“After all, the success wasn’t certain, [Riders] took a lot of risks,” he said. This bet turned out to be the right call, though. Elyoya was named the rookie of the split in the spring and the Superliga Orange’s MVP in the summer.

But for the jungler, the individual awards weren’t as important as his personal progress. “There is LFL and other leagues with better players above SLO,” Elyoya said. “I was happy, obviously, but [the awards] didn’t mean that much to me.”

Elyoya said the three factors that made him an impactful player last year were his work ethic, determination, and how many hours he dedicated to League. The jungler’s rise to making a name for himself wasn’t a coincidence since his evolution throughout 2020 was marked by his hard-working attitude.

The rookie wasn’t able to evolve only on his own, though. Movistar Riders played a key role in Elyoya’s progress, something that the new MAD Lions player recognizes and appreciates. “They gave me everything I needed instantly without any kind of problem,” Elyoya said. “I’ve been the one who worked, but Movistar Riders have given me the resources since the beginning. They got the same or more credit than me.”

Movistar Riders and Vodafone Giants aren’t the only contenders in Superliga Orange, though. Last year, teams like G2 Arctic made a statement in the league. G2’s Academy head coach, Melzhet, guided his team to the Summer Split finals and helped Elyoya individually during that time. “[Melzhet and I] watched LPL every morning,” Elyoya said. “Nowadays, if I have any doubt, I ask him. We have a similar idea of League and we dedicate our lives to the game. He’s the person I work with the most and he’s not even on my team.”

Everyone involved in the jungler’s first year as a pro helped him improve as a player, especially in one area: confidence. “It has been my biggest change,” Elyoya said. “At the beginning, I didn’t go for invades that I thought were right, simply because I didn’t want to be criticized if I was wrong. Now, that’s gone. My confidence has grown thanks to my teammates and the support of the fans.”

Called up to the LEC

Elyoya’s hard work and confidence paid off. Movistar Riders reached the EU Masters semifinals in the spring and won their first SLO championship in four years. The jungler produced great performances in games like the first tiebreaker of Group C against Schalke 04 Academy and the SLO finals against G2 Arctic, displaying his leadership abilities.

Once he proved his talent, Elyoya received offers from multiple LEC teams during the offseason. He chose MAD Lions, especially because of the coaching staff.

“They have one of the best coaching staffs of LEC, it’s super complete,” Elyoya said. “There’s even more staff than players. Additionally, they have well-equipped facilities and I fit really well with my teammates.”

With Mac in charge of the team, the jungler trusts in the talent of his squad because it “offers much more than Movistar Riders in 2020.”

“I understand why [Riders and MAD] can look similar because there’s a strong mid and a powerful bot lane,” Elyoya said. “You can play through mid to bot, but this team is more complete and we can play for all the lanes.”

Despite the future looking bright and challenging at the same time, Elyoya knows that his debut in LEC won’t be easy. “Our beginning won’t be that strong, but our peak will arrive at the final stretch of the season,” the jungler said. “At the moment the attitude of the players is correct. If we lose one game, we focus on what we can improve and we always learn something. That will be the key point of 2021, we will be a better team in comparison to others in the long term.”

Regardless of MAD Lions’ evolution, G2 Esports and Fnatic are the teams to beat in LEC right now, especially after the offseason. Even though Elyoya admits that it’ll be hard to take down these juggernauts, mainly because “they also will progress,” he’s not scared. “I come with the will to win. If I don’t come with that intention, what do I play for? It would be pathetic,” he said. “How will we win them? I don’t know yet.”

Elyoya will compete against strong junglers like G2’s Jankos, Fnatic’s Selfmade, and Rogue’s Inspired this year. Instead of being frightened, the rookie is confident. “I think that I can beat them,” Elyoya said. “Maybe not at the beginning, because it’s my first year in the LEC, but once I’m more confident I can’t face them without any kind of problem.”

For the jungler, facing a back-to-back LEC regular season MVP isn’t a fear. Neither is playing against one of Fnatic’s key players during their run in last year’s Worlds. Even though he knows that he isn’t experienced on the biggest European stage yet, Elyoya carefully watched the LEC last year.

“Selfmade is really good mechanically,” Elyoya said. “In fact, he’s one of the best players of LEC. He’s really good when it comes to playing for himself, but he doesn’t know when he has to give resources to his team. Instead, Jankos is the opposite. He’s really good at sharing resources, but he’s not as good as Selfmade mechanically. Everyone has that exploitable weak point.”

Elyoya was someone who “didn’t find anything he really liked until he realized that League was what excited him.” Now, he’s bringing his hard-working attitude to the highest level of European competition. The rookie has a big challenge ahead of him, but with confidence in his teammates and himself, it wouldn’t be that much of a surprise if MAD Lions repeat their success from 2020 this year.

You can watch Elyoya make his MAD Lions debut in the 2021 LEC Spring Split on Friday, Jan. 22.