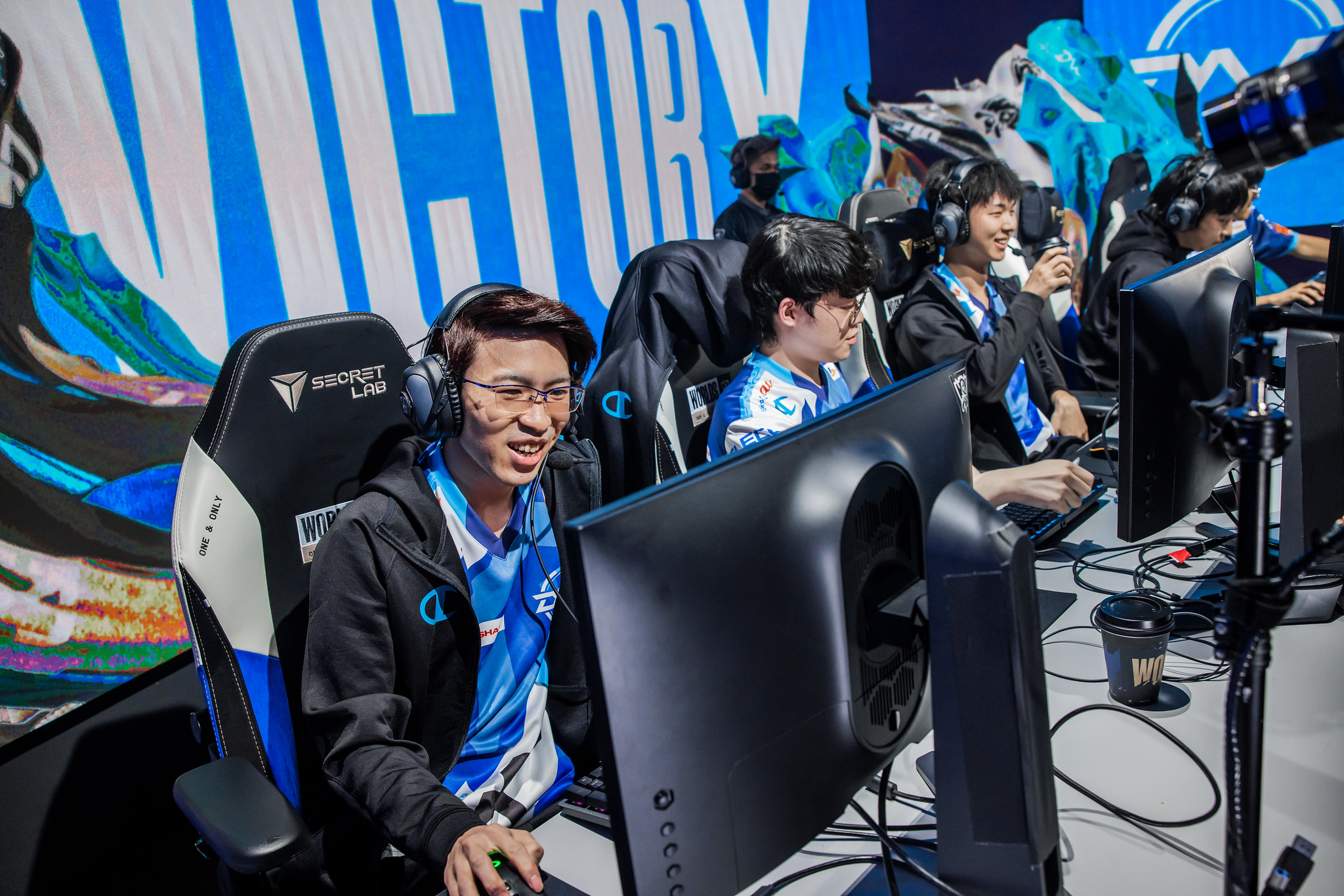 When the LCS loses, it’s only fitting that the LEC finds some way to win—even when they aren’t directly involved in the loss.

The LJL’s DetonatioN FocusMe kept their 2022 League of Legends World Championship group stage hopes alive today after a dominant victory over the LCS’ Evil Geniuses. This win has further streamlined the placement of teams within this group, granting the LEC’s Fnatic a guaranteed first-place finish and entry to the main event group stage.

Though EG forced DFM into an aggressive early game, their inability to focus on objectives became their undoing, granting substantial leads to the LJL carries that could not be matched. These teams will meet again tonight to determine which, if either, are advancing to the elimination or qualification stages of the play-in stage.

After being absent for most of Worlds thus far, both DFM and EG opted to bring enchanters to the international stage in the form of League’s most loveable cat and a master of immense healing.

While Vucan often thrives on more aggressive support options like Nautilus and Rakan as a means of giving his team strong initiation, he instead opted to bring Soraka to the Rift, placing a great amount of trust in his lane partner, Kaori. Notably, EG’s only loss to this point came in their first game of the tournament, where the duo played Caitlyn and Lux and were unable to beat the duo of Fnatic’s Upset and Hyllisang.

Yet an inability to roam safely forced Vulcan to stay in the bot lane, ultimately unable to heal through the bursts of damage coming from the Sivir/Yuumi combination on the other end. Luckily, Kaori was capable of maintaining a substantial CS lead that, thanks to the current meta priority of Miss Fortune, allowed him to be a big contributor to teamfights from afar.

On the other side of the bot lane was a Yuumi that ditched a support playstyle almost entirely. Using recent buffs to Yuumi’s Q damage, Harp rushed a Luden’s Tempest on the Magical Cat. While attached to his ally of choice, Harp could heal them for large amounts at once and chip through the health bars of EG without fear of taking damage himself.

Vulcan’s positioning in this game appeared to resemble that of the engage champions that he heavily favors, which does not bode well for a champion like Soraka. With so many jumps and dashes on the enemy team, Vulcan often served as the first target for DFM, leaving the rest of EG without the healing they needed to survive burst damage.

Buckle up, it’s going to be a long night

Though EG continued to win early-game skirmishes, they had yet to destroy a single enemy tower until nearly 30 minutes into the game. Meanwhile, towers were little more than large minions for DFM, who continued to take the structures down with ease, all the while increasing their gold lead exponentially.

Inspired uncharacteristically missed a number of Sejuani ultimates throughout this game, many of which would have established winning fights for EG. This resulted in Inspired becoming more of a meat shield for his allies in teamfight situations, doing what he could to prevent DFM from getting into EG’s backline and ridding the LCS of their damage potential.

On the opposite side, however, DFM’s jungler Steal served as a master of crowd control. EG appeared to overestimate how effective the LJL representatives were at picking through their frontline, often choosing to separate Inspired and top laner Impact in fights rather than work as a cohesive unit.

With a Yuumi strapped to his back, ADC Yutapon struck each member of EG with boomerang blades for a final quadra kill that earned DFM their third victory of Worlds. Thanks to this win, fans should expect tiebreaker matches to grace their screens before the final day of play-ins ends.

One of these tiebreakers will see DFM face EG once more. The winner of this match will move on to face the CBLoL representatives LOUD, who won their match against the LCO’s Chiefs Esports Club earlier tonight.

Fnatic have also now officially qualified directly to the group stage of Worlds since their first-place spot can no longer be contested.