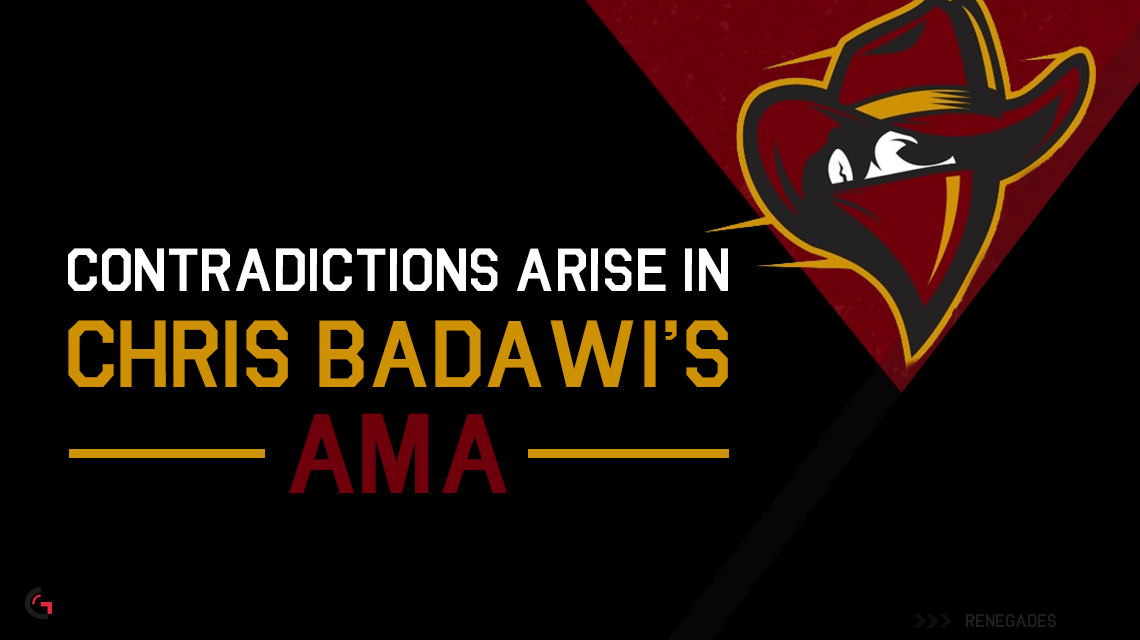 Chris Badawi’s Reddit AMA launched just after 8:00 p.m. EDT last night with questions and answers still pouring in through the early hours of the morning. Badawi was often quite blunt in his approach and made an effort to tackle almost every upvoted question. Concerning the Renegades ruling, he continued to deny the lion’s share of the acquisitions leveled against him and his organization stating, “I was banned because Riot wanted to ban me. They didn’t like me; they didn’t trust me.” But more surprisingly, some of the statements made by Badawi strictly contradicted not only the allegations made by Riot and other team owners, but several other third parties. I have listed some of these moments below with additional commentary.

“Maybe people don’t know this. I think I stayed in that house for… across two periods… for a period of six weeks. You know, and that’s why I can publicly say, ‘I think this was the right decision.’”
—Richard Lewis, The Richard Lewis Show #5, 5/12/16

“Richard claims to have stayed in our gaming house for 5 weeks and to have witnessed things that concerned him. In truth, he was there for about 5-8 days in total (something easily corroborated by the TEN other people living in the house at the time).”
—Chris Badawi, Reddit AMA, 7/27/16

This mismatch of information was the sharpest contradiction made by Badawi in last night’s AMA. Luckily, this disagreement is the least subjective of anything squabbled over thus far in the ongoing Badawi/Renegades debacle. It should be fairly easy to confirm the length of Richard Lewis’s stay in the Renegades team house given the amount of witnesses present as suggested by Badawi. The only small wrinkle that may come up is if Lewis mistakenly included his time with the Renegades Counter-Strike: Global Offensive team in Las Vegas as a part of his calculation, if he spent any time with the CS:GO team at all.

Look for a rebuttal by Lewis and verification by Renegades team members or staff who lived in the house during Lewis’s stay.

“For the periods of time we’re talking here, like I think the longest period of time that we didn’t get paid for was like two months.”
—Chad “SPUNJ” Burchill, The Richard Lewis Show #12, 6/27/16

“Yes, we had some late payment (sic), but all players were always paid within the 30-day window that was allotted to us contractually. And all players always received their full and complete payments.”
—Chris Badawi, Reddit AMA, 7/27/16

Again, this discrepancy in information should be fairly easy to prove given the quantitative rather than qualitative matter at hand. This issue is only complicated slightly by the presence of Lewis himself as he has publicly been at loggerheads with Badawi since the release of the second Riot ruling. Also notice the “I think” qualifier used by SPUNJ in his on-air statement; the disagreement here may be due to a simple flawed remembrance by the former Renegades in-gamer leader.

This matter could be easily settled by a screenshot of bank balance statements provided by the Renegades organization themselves or the members of the Renegades CS:GO team at that time.

“I was a lawyer in New York doing patent litigation and one day I got run over by a car and almost died.”
—Chris Badawi, Alex Ich & Crumbzz to form Challenger team, 3/9/15

“The work I was doing did not require me to file to be an attorney since it was early in my career and I was still being taught and supervised (meaning I didn’t have to take a couple minor tests/pay dues … to become an attorney passing the bar is the only difficult part) to do legal work.”
—Chris Badawi, Reddit AMA, 7/27/16

An exchange regarding Badawi’s credentials was the most contentious interaction in last night’s AMA. The Reddit user “ClownFundamentals” hotly contested Badawi’s purported previous occupation as a “lawyer” given an absence of information in the New York Attorney Registry, an issue I also pointed out my pre-AMA article. Badawi provided evidence that he did, in fact, pass the New York Bar Exam in July 2011, but eventually admitted that he did not pass or take the character and fitness tests or do other paperwork which would have allowed him to officially qualify as an attorney.

Badawi’s previous claims to being a patent litigation “lawyer” instead of doing patent litigation work as an unregistered lawyer obviously may have been done for the sake of brevity, but Badawi’s admission of being unregistered only came after a second edit of his original response. The apparently reluctant admission was hardly an encouraging sign given his widely disputed reputation.

“Sources say there was some unhappiness among players in the Renegades house, and confrontations did occur. One of those confrontations was an argument between Maria “Remilia” Creveling and Badawi after she notified the team of her intention to leave the week of Jan. 31, according to several team members who were present.”

—Jacob Wolf, Renegades, Riot and the danger of absolute power, 7/25/16

“I’m not sure what he is referring to in regards to other confrontations. I did yell at Rob, our manager once for scheduling the maids to come at 8am (who woke everyone up) on game day a few weeks in to (sic) LCS. I’m not sure if he even remembers it to be honest, but its (sic) the only other time I recall getting pretty angry about it and I do regret it.”

In the wake of the original Riot ruling, many Renegades players and ex-players publically came out in support of the organization. Perhaps the strongest statement came from Alberto “Crumbz” Rengifo who tweeted, “My teammates and I aren’t spineless. We would not put up with even one instance of an unsafe environment.” However, in Jacob Wolf’s recent ESPN article which triggered the Badawi AMA, Wolf cryptically alluded to “some unhappiness” and confrontations other than the one between Remilia and Badawi highlighted in the article.

I asked Badawi about Wolf’s statements in his AMA, but he denies the existence of any “other confrontations” beyond the Remilia incident and an additional altercation involving Rob “Leonyx” Lee and himself which is quoted above. It is unclear if the Lee/Badawi interaction was only another “confrontation” Wolf had in mind when he wrote the above lines.

Perhaps Jacob Wolf would be willing to clarify his statements with respect to Badawi’s response sometime in the future. Of course, ex-Renegades players and staff could also confirm or deny Badawi’s recent statement.

“We have been provided with evidence that current Renegades owner Christopher Mykles had a deal in place with suspended former owner Chris Badawi that would grant Badawi a 50% stake in the team once his suspension had expired.”

“Monte and I never had an agreement that I would get 50 percent of the team after my ban was finished. We did discuss MULTIPLE options, of course, for what I could potentially do after my ban was lifted. The most likely scenario we discussed was probably me taking over Misfits EU if they got into LCS.”

Badawi denies almost all of Riot’s allegations, so I will not include all disagreements as they mostly boil down to ad hoc arguments with little chance of further evidence to be provided at a later date due to Riot’s position on this matter. However, Badawi made an interesting statement concerning Riot’s assertion that Monte Cristo and he had made a secret deal to return Badawi’s ownership stakes.

In my previous article, I postulated that Riot’s “evidence” may involve ownership plans revolving around the expiration of Badawi’s ban, which was quickly approaching at the time of the second Riot ruling. Reading slightly between the lines, the above Badawi quote seems to suggest that Badawi maybe had the same suspicions. Notice the total capitalization of the word “multiple,” suggesting that post-ban discussions between Monte and himself regarding ownership were quite frequent. Could one of these communications, if done via text, been obtained by Riot employees? And is it possible, misinterpreted or otherwise, that this message or these messages could have led Riot to believe a deal was already in place?

To know for sure, Riot would have to release their evidence to a third party or to the accused. Unfortunately, Riot have been less than forthcoming thus far.