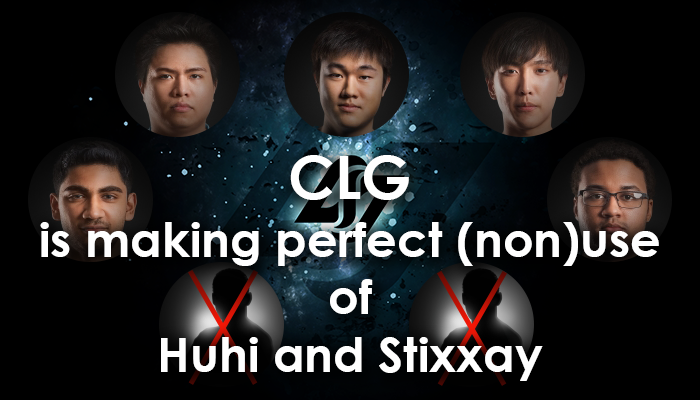 Many feel that Counter Logic Gaming is wasting the talents of Huhi and Stixxay.

CLG’s two newest players are playing a key role in helping CLG win; they just aren’t doing it on the stage. Instead, they’re driving Pobelter and Doublelift to stronger performances by watching over their shoulders, providing internal competition. And other organizations—like Team SoloMid—are taking notice.

CLG made one of the biggest splashes of the mid-season break when they signed Pobelter, then added Huhi and Stixxay to create a seven-player roster with two ADCs and two Mids. Since the announcement, one of those three signings has been among the NA LCS’s best players, while the other two have been missing in action. In the lead-up to Week 4, when Doublelift injured his hand, it was expected that Stixxay would make his first appearance on the LCS stage. But instead, Doublelift was the one taking his seat with his hand in a massive bandage, prompting plenty of social media commentary:

It’s easy to see where these opinions come from. Many people thought CLG’s plan was to have multiple strategic options made available by their deep roster, like SK Telecom T1 has with Faker and Easyhoon. If CLG were working under this model, an expanded roster would make the team more flexible and harder to prepare against. Within this plan, both of the Mids and both of the ADCs would split play time, depending on CLG’s intended strategy and play style against any given opponent. The rumors that CLG tried to lure Forg1ven to join the team alongside Doublelift add to the idea that CLG was—or should be—trying to imitate SKT’s setup.

If CLG did intend Huhi and Stixxay to be alternates rather than just subs, they are clearly doing it wrong. It’s already too late to give all seven players enough time to be comfortable together on the LCS stage in their different configurations, especially with only 18 games in an LCS regular season (and just 10 remaining), compared to the LCK’s 18 best-of-three series per team (resulting in between twice and three times as many games played per team). If this was the plan, then CLG has botched it.

But as some people expected (Fionn is smart), an SKT-imitating “alternates” arrangement wasn’t the main reason CLG expanded their roster. How can we know? Just watch the introductory vlog for new Head Coach Chris “Blurred Limes” Ehrenreich, where he said:

“You always hear, ‘Well SKT, they have two Mid laners. Hey, we should get two Mid laners.’ When I first spoke to CLG, I proposed that we do more than that. We want two of everything.”

Why would a team want two players at every position if their plan was to rotate playing time? That’s an absolute nightmare for team synergy. It would never work. And since a 10-player roster is on the Head Coach’s wish list, it goes to show that splitting play time among the starters and the second string isn’t the intention. Huhi and Stixxay were brought on for a different purpose: to create internal competition.

The goal of internal competition is to create pressure on the starters. Since Huhi and Stixxay are on contract, it should put fear into Pobelter and Doublelift: “If I underperform, I’m out of here. My replacement has already been chosen. I’d better practice harder. I’d better take this more seriously.”

If results are anything to go by, it’s working. Pobelter has been a revelation, dishing out the highest average damage to champions per minute of any player in the top leagues of North America, Europe, South Korea, or Taiwan.* His champion choices have helped, with plenty of play on high-poke champions like Kog’Maw and Azir. But he’s passing the eye-test, too, making plays for his team and putting together score lines like 7/0/8 on Varus and 9/1/10 on Azir. He’s doing exactly what CLG hoped, serving as a giant carry threat to help lighten the load on Doublelift’s shoulders.

The same can be said of Doublelift, who has the highest average earned gold per minute in the LCS, LCK, or LMS. Doublelift has always been a massive earner with chart-topping gold share, but this split he’s converting that gold into game impact, with a respectable 5.7 KDA, very impressive 78.2% average kill participation, giant leads coming out of the laning phase, and 564 average damage to champions per minute (compared to last split’s 477). He even took home Week 4 MVP honors for his efforts.

The players aren’t drawing direct connections between their internal competition and their competitive results, but there seems to be something special about CLG this split. Combine Pobelter and Doublelift’s inspired play with strong contributions from the other three positions, including ZionSpartan looking like one of the league’s best Top laners again, and we’re seeing perhaps the strongest CLG of the LCS era.

Other teams are taking notice. Just this week, TSM announced that they’ll be splitting scrim time between WildTurtle and former Keith, Team Liquid’s former ADC alternate, stating that they want to “motivate [WildTurtle] to get back into his old form.” Though there are differences in the circumstances of the arrangement, and Keith hasn’t been formally signed to the team, the core concept is very similar: create internal competition, make your starter realize he is expendable, and either motivate the starter to perform better, or train up his replacement in the process.

CLG isn’t pioneering the concept of internal competition by any means. Korean and Chinese organizations often keep large practice rosters on hand. In fact, some of North America’s Korean imports were on LCK practice rosters, including Team Liquid’s Fenix. Within North America, Team Liquid deserves credit for using internal competition to re-motivate Piglet, though this was somewhat an accidental arrangement. Keith was originally a substitute of necessity, drawn from the TL Academy team, while Piglet’s visa was being resolved. Liquid deserves credit for having an Academy team in the first place, but it was Keith’s unexpected strong performance that created the internal competition and gave Liquid a built-in replacement option when Piglet’s play and attitude were slipping.

Still, even if CLG didn’t invent the concept of internal competition, they’re the first North American team that is formally creating it by having additional players on contract and living in their main gaming house.

And the more it works, the more CLG wins, the more we should expect to see other western teams expanding their rosters and following CLG’s path.

*LPL data is not available.