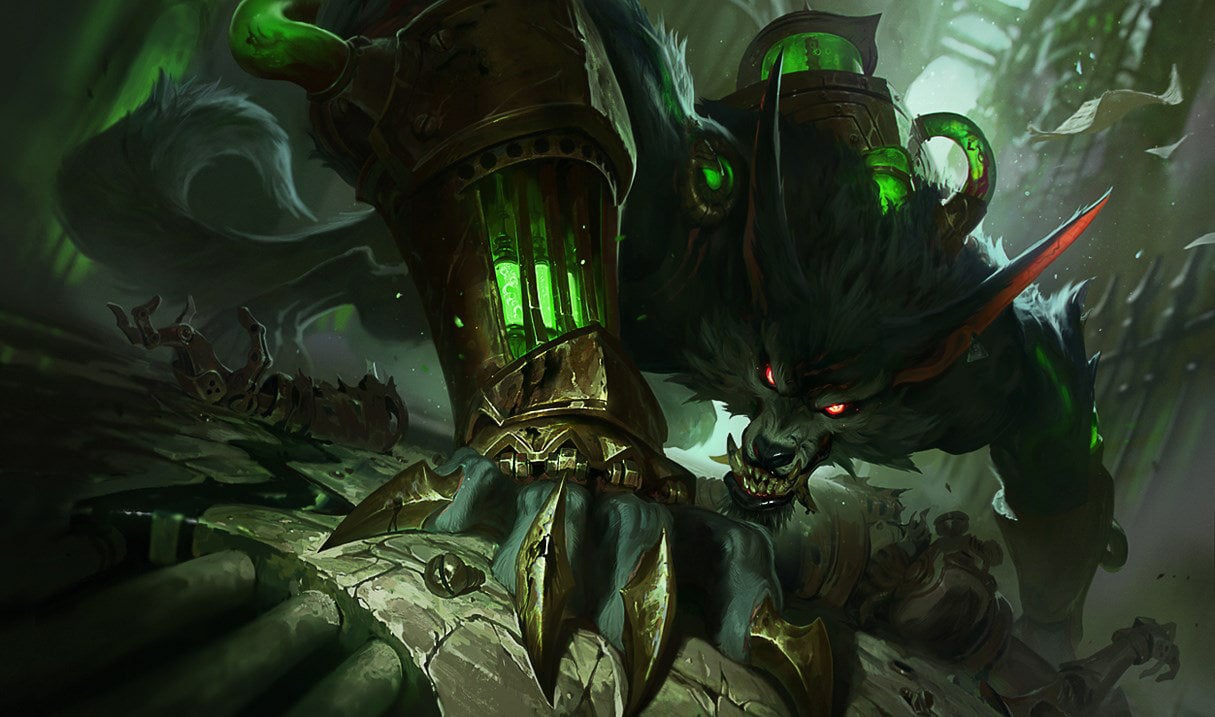 Warwick is one of League of Legends’ most oppressive melee champions. Known for his ability to move around the map at breakneck speeds and gank unsuspecting enemy champions, Warwick is one of the game’s most ferocious and unrelenting champions. His kit allows him to stick onto players and brute-force them down through the power of his enhanced auto attacks.

Warwick can be played as either a jungler or a top laner. His versatile role as a pseudo-tank and bruiser makes him a competitive pick on the top side of the map. Plus, Warwick’s ability to keep himself alive through his sustain-focused abilities allows him to farm minions and monsters effectively, pushing lanes and earning mountains of gold in the process.

With details of runes, high-priority items, and champion counters, here’s everything you need to know about mastering Warwick in your League games.

Triumph: There’s practically no downside to Triumph. A 12-percent heal in the heat of battle could be the difference between dying and extending your presence in a teamfight.

Legend Alacrity: One of Warwick’s most important offensive statistics is attack speed, so Legend: Alacrity feels like an obvious choice.

Last Stand: Warwick thrives better than most champions when low on health thanks to his built-in lifesteal and healing properties. Last Stand only amplifies those effects and allows you to pull back seemingly lost teamfights from the brink of defeat.

Celerity: Warwick’s chase potential is immense, so getting the most out of your movement speed bonuses should be a top priority.

Waterwalking: Warwick can use Waterwalking to zoom across the river, traveling between lanes within moments. This rune can easily be used to boost the rate at which you arrive at another lane for a gank.

Emberknife/Refillable Potion: The standard starting combination for AD junglers, these two items will allow you to easily clear your jungle to a point where you’ll have enough sustain to accrue enough gold for a strong first recall. If you’re picking Warwick in the top lane, the popular Doran’s Blade/Health Potion combination is perfectly acceptable.

Although it’s not a Mythic item, Titanic Hydra is a focal point of Warwick’s damage. You’ll want to secure a Tiamat on your first recall and start building toward this item in tandem with your Mythic.

Divine Sunderer is a pure damage enhancer that allows your auto attacks to hit like a truck after casting an ability. The item’s passive, Spellblade, is expertly combined with all of Warwick’s quick-hitting abilities but can be strung together with Jaws of the Beast (Q) for some rapid burst. Plus, the Mythic passive attached to this item that gives all of your other items extra armor and magic penetration is extremely useful when you have to shred tanks in the later stages of a game.

You’ll need a dedicated tank item eventually on Warwick, and there aren’t many better options than Thornmail. Its anti-AD properties and passive application of Grievous Wounds are incredibly valuable for a frontline champion like Warwick.

Plated Steelcaps are going to be your standard choice for boots as a bruiser. But if you feel like you need more tenacity and magic resistance, Mercury’s Treads are always a solid option as well.

Blade of the Ruined King is going to be the primary option for Warwick’s late-game offensive item since the extra percent-health damage that it causes your attacks to deal is a much-needed damage booster. Plus, the ability to steal movement speed from enemy champions via your auto attacks will help Warwick players stick to their targets in one-vs-one chase downs.

Spirit Visage is the only other defensive item in Warwick’s core build. Depending on the opposing team’s composition and if you’re in the need for some extra magic resist, you might want to prioritize this item over Thornmail or any other tanky options. Regardless, this item will most likely find its way into your build at some point.

Although you’ll rarely want to stray away from Divine Sunderer as your main Mythic item, Sunfire Aegis works well in a pinch as a replacement, especially if you fall behind early or if your team composition needs a bit of extra tankiness.

If you find yourself taking a lot of burst damage and not having the strength to survive in extended teamfights, the Lifeline passive of Sterak’s Gage makes for a surprisingly strong defensive option that could occasionally come in handy.

Warwick struggles against champions that can hold him down via crowd control and prevent him from sticking onto them. If he’s prevented from moving around a teamfight and focusing down champions, Warwick is relatively beatable. Because of their sustained damage, respectable crowd control, and relative tankiness, champions like Zac and Rammus tend to beat Warwick in the jungle, while Darius and Aatrox could give him trouble in the top lane.