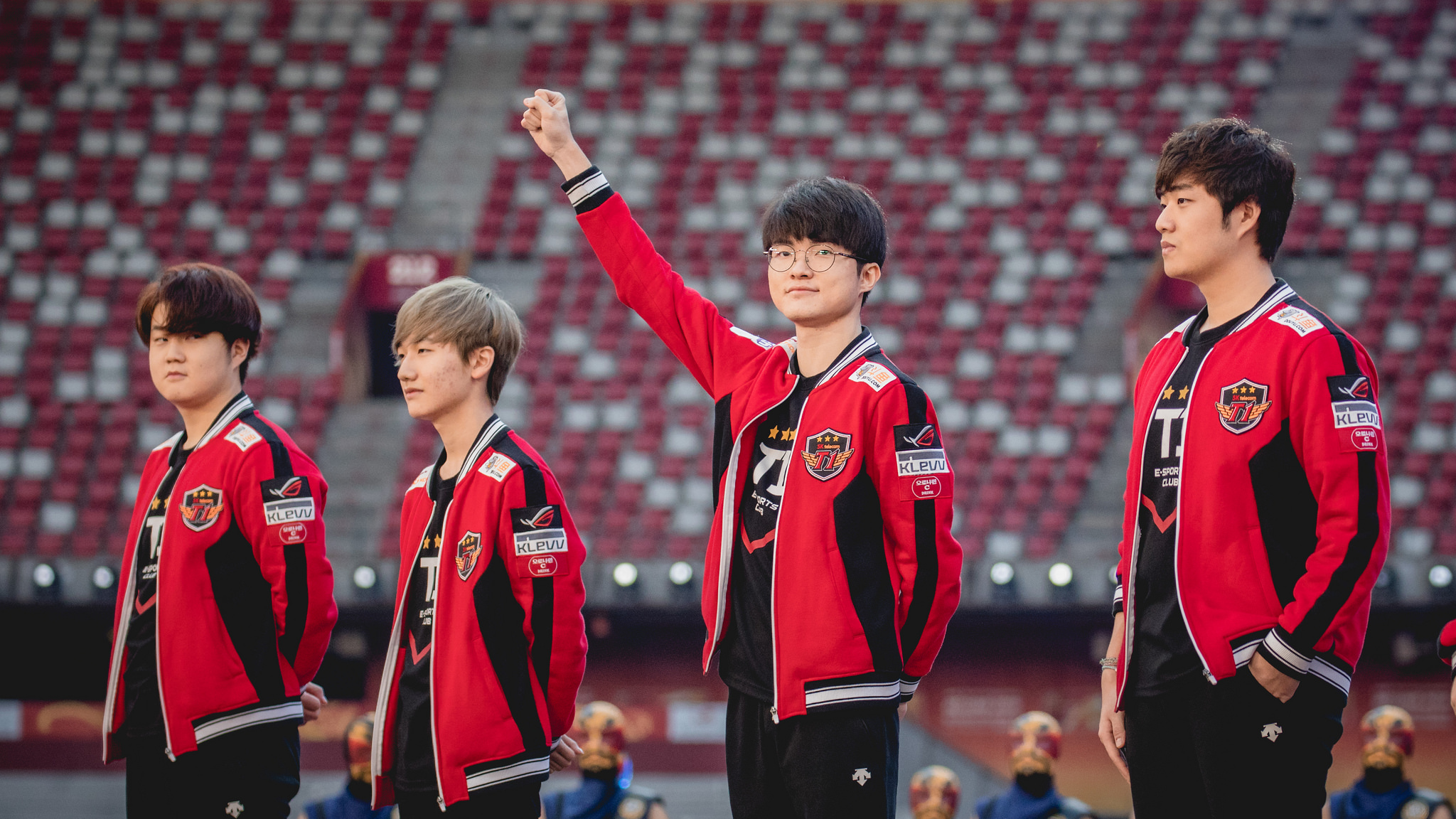 Faker is one of the best League of Legends players in the world, if not the best.

Throughout his career, he’s become the face of League due to his personality and godlike skills. His gigantic champion pool makes him impossible to target during the drafting stage, meaning there aren’t enough bans to get rid of all of Faker’s champs. His mechanical talents and surrounding cast of great teammates have allowed Faker to lift the Worlds trophy three times, win countless MVP awards, and several MSI and IEM championships.

No other esports pro in the world can compare to the success that Faker has garnished and it’ll be a long time before someone likely even comes close.

His long list of accomplishments throughout his career features some of the most mind-boggling, high-skill plays and outplays that have ever graced Summoner’s Rift. Here are Faker’s all-time best plays that have earned their place in the esports history books.

Faker puts C9 in their place

The matchup between SKT and C9 during the group stage of Worlds 2017 had so much on the line. C9’s mid laner Jensen was so eager to prove himself that before the tournament, he said he would clap Faker in the mid lane.

C9 showed up to the tournament with a new jungler and the Jensen and Contractz duo tried their best to chip away at Faker’s legacy without any results. Faker read their movements like a map throughout the game and even pulled off an unforgettable play.

While Faker’s Ryze was getting jumped on close to his tower by Contractz’s Rek’Sai, he moved in a perfect sequence to make C9 believe that they could get the kill. He got close to his tower as his HP went down and forced Rek’Sai to use her ultimate to try to seal the deal.

But when Rek’Sai went underground, Faker flashed to the left side of the lane to dodge the ultimate and made it almost impossible for Rek’Sai to get out without dying. This was also first blood in the game, which made the crowd go wild.

Whose team is Gnar on?

Sylas players in your ranked games could make you believe that the champion is too complicated for anyone to make a meaningful play by stealing a crucial ultimate. This certainly isn’t the case if you’re Faker, though. He put the G2 squad to shame during the 2019 Mid-Season Invitational by making G2’s gold lead look like a non-factor.

After forcing SKT’s Mata, playing Tahm Kench, to go back to base, G2 continued to push aggressively to take down the first mid lane turret. It looked like SKT were about to back off, but fans witnessed Clid’s Rek’Sai slowly creeping toward the mid lane. Before Rek’Sai could do anything, Faker’s Sylas stole Gnar’s ultimate and flashed to stun everyone on G2.

SKT only secured a single kill out of the iconic start to the teamfight, but the fear it struck into G2’s hearts was enough to force them back to their base.

When Faker gets into a groove, a pair of actual chains may not even be enough to hold him back from making plays.

During the second day of week 10 in the 2019 LCK Spring Split, Faker found himself at a slight disadvantage. At the 15:02 mark in the clip, Faker, as LeBlanc, was dodging stuns left and right. Understanding the direness of the situation, Faker chose to flash to safety since he could easily get bursted down.

Afreeca Freecs’s Dread, playing Jarvan IV, wasn’t planning on letting Faker escape, however, and he followed his flash to finish him off. But following Jarvan IV’s flash, Faker quickly switched back to his clone, causing Jarvan IV to waste his ultimate. This allowed his team to finish off the engagement for him.

The beginning of the legend

Faker’s first professional League match was against Ambition, one of the world’s best mid laners during his prime. The young prodigy Faker managed to overcome all the odds stacked against him during his first career-defining moment and gave the world its first glimpse of a legend in the making in 2013.

Though Korekan League fans already had high expectations for SKT’s second squad, Faker was just a no-name mid lane player who was part of what looked to be an academy team by today’s standards. Fans definitely didn’t expect him to have a flawless game and go 5/0/7 on Nidalee against Ambition’s Kha’Zix. Faker gave Ambition no breathing room throughout the game and the veteran finished with a 1/4/1 scoreline.

LeBlanc is one of Faker’s signature champs. He knows all the ins and outs of the champion, which makes it impossible to pull off a trick if you’re playing LeBlanc against him.

During the second game of SKT’s matchup against KT in 2015’s SBENU Champions Spring, Faker played Syndra after KT snatched LeBlanc during the draft. But little did KT know that it’d be the beginning of their end. Though the game was going according to KT’s plan, things took a turn for the worse after a failed engagement in front of the Baron pit.

Though KT was getting ready to cut their losses since both their ADC and mid laner were going back to safety, Faker pulled off one of the most iconic Syndra stuns that could take years to replicate in a ranked match, pinning both Sivir and LeBlanc into the first mid lane tower.

Who invited Faker to the party?

Over the years, teams have realized that one of the best ways to dismantle SKT’s defenses is by picking fights when Faker isn’t present. This scenario rarely happens, though, since Faker always finds a way to be at the right place at the right time.

During the first round of the 2019 LCK summer playoffs, at the six-minute mark in the clip, SKT were taking down the Baron after a successful mid lane push, which Sandbox Gaming were getting ready to contest. Despite SB’s best efforts, SKT took down the Baron, but Faker was almost out of mana. While SB were looking to capitalize on SKT with Faker’s exhausted Ekko, Faker decided to go back to base, which almost turned the fight into a one-sided stomp for SB.

Faker had TP ready, however, and used it to come back into the middle of the fight to wreak havoc. Everything went south for SB shortly after Faker finished teleporting and he avenged his fallen teammates with a triple kill.

Putting other Azirs to shame

SKT’s rivalry with KT has produced some of the best plays in League history. During the 2016 LCK Summer Split, at the 4:23 mark, Faker’s Azir was making his way back to the mid lane after a failed TP attempt but was caught by KT’s jungler, Elise.

Faker immediately threw down his ultimate to save himself and used Zhonya’s Hourglass to allow his team to come to his rescue. Once three SKT players arrived at the scene as backup, Faker and his teammates turned things around and picked up two kills in return.

This play showcases how cold-blooded and calm Faker is during the most intense in-game situations. In a similar scenario to this one, any other player would potentially panic and die within seconds, making it impossible to salvage a play out of a bad situation.

The play that made players main Riven

Faker especially shines while playing mechanically-intensive champions since all his micro-decisions allow him to truly show off his genius.

Riven is a powerful champion that you should be fine playing unless you intentionally feed on her. But when it comes to making a difference, you’ll have to put in the work just like Faker.

During the early game of an SKT vs. KT matchup in 2015 LCK Summer Finals, Faker, playing Riven, decided to dive the enemy mid laner, Cassiopeia, since his jungler was closing in on her from the right side of the map.

Cassiopeia successfully dodged the first attempt with a flash but took a second look back to cast her ultimate. Faker seized the opportunity to use his own flash and dodged Cassiopeia’s ultimate with a millisecond reaction time to secure the kill.

The Shockwave heard ’round the world

Being mechanically gifted is only one side of the coin when it comes to being a great player. In addition to holding your own, you should also be able to make judgment calls and capitalize on enemy mistakes while syncing with your teammates.

Faker pulled out one of the sickest wombo combos in LCK history during the 2017 LCK Spring Split. KT decided to take an engagement that looked like a no brainer, especially after taking down the Baron.

KT caught SKT’s Nautilus, one of the game’s tankiest champions, and was immediately hit by a Nami ultimate from SKT’s Wolf. Faker, on Orianna, being the playmaker he is, used this as an opportunity to flash in and cast his Shockwave to render KT’s Baron play useless.

While the play may not look that flashy since four champions just get destroyed following an ultimate, what Faker pulled off here requires perfect timing and attention to detail.

The fifth game of any series in the LCK used to be wild. The Korean league used the “Blink Pick” mode back in 2013, which produced some of the best and most awkward mirror matches.

Though this game was looking grim for KT since they were more than 10,000 gold behind, Ryu’s Zed caught Faker’s Zed pushing by himself in the mid lane. Ryu brought down more than 65 percent of Faker’s health bar with the help of his tower. But he was in for a surprise.

Just when Ryu was getting ready to land the finishing blow, Faker suddenly went into god mode and deleted Ryu from the face of the map in a matter of seconds. Though it was impossible to “look at the cleanse and the moves” of Faker during the heat of the moment, you can appreciate the mechanical skills of the greatest League player by slowing down the video and truly witnessing what the Zed play was.