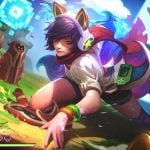 Ahri, the Nine-Tailed Fox, is one of the most popular mid lane champions in League of Legends.

She offers players a unique playstyle as an assassin who quickly closes gaps and lures her opponents in with her charm to inflict damage. While the champion is extremely powerful, she is also popular due to the variety of impressive skins in her collection.

There is a number of different cosmetics available for the champion, highlighting many different styles and looks. Here are some of the best skins Ahri has received over the years.

Released in 2016, Arcade Ahri joined the retro skin line. Priced at 1,350 RP, the Epic skin offers entirely unique VFX that pixelates her abilities as if she was in an arcade game.

The skin also included a new recall animation for the champion. While returning to base, Ahri plays an arcade machine. One of the skin’s most impressive features is its color-changing tails. These will cycle through a variety of colors over time. This unique color scheme for Ahri has made Arcade Ahri one of the best and most popular skins available for the champion.

This unique Legendary skin released at a premium 1,820 RP price tag. Not only is the skin visually impressive with its pink and blue color scheme, Spirit Blossom Ahri’s tails also appear blue to suit the spirit theme implied in the name.

Outside of the aesthetic changes, the skin includes multiple unique animations for the champion. Players who aren’t the fondest of the color choices will be pleased to know that the skin is available in a range of chromas including Aquamarine, Night Blossom, and Obsidian. If the cost is no issue Spirit Blossom Ahri is one of the highest quality and most impressive looks for the champion.

Star Guardian Ahri gives the mid laner distinct Sailor Moon vibes. The Star Guardian line of skins grew in popularity due to the accompanying story and video additions that told the story of a group of high school students who became Star Guardians to protect the universe from cosmic enemies. Star Guardian Ahri was released in 2017, and the Legendary skin costs a total of 1,820 RP to acquire.

Styling Ahri as a K-pop star might not be a unique concept for the champion anymore. But Popstar Ahri is where it all began.

Released in 2013 for just 975 RP, Popstar Ahri offers a bright pink look to the champion, boasting a completely unique character model with a new hat and clothing. The blue orb perfectly compliments the pink color scheme of Ahri, making this skin one of the most aesthetically pleasing looks for the champion in the game. This look can be enhanced further with the addition of chroma variants for the champion, which allow her to adopt a new color scheme from Amethyst to Ruby.

This skin also includes unique animations for Ahri, including some hidden Easter eggs such as dancing with a nearby the Blue Sentinel. Due to all its unique features and its clean look, this is a great choice when purchasing a skin for Ahri.

Following her first musical endeavors, Ahri chose to reinvent her look by pairing up with fellow champions to create a K-pop group called K/DA.

K/DA Ahri is a popular skin not only due to K/DA’s music but also due to it being one of the most well-designed skins for the champion. This look redesigns Ahri’s tail as what appears to be diamonds while her choice in clothing provides an elegant white-and-black look. With the use of Prestige Points, players can unlock another variant of this cosmetic in the Prestige Edition. The most notable changes between these two variants are the change is clothing and color scheme with Ahri donning a rich gold attire.

Likely the rarest skin for the champion, Challenger Ahri was first made available in the store to celebrate the beginning of season five back in 2015. Players can acquire the skin for just 975 RP.

This look is a very unique styling for the champion. Challenger Ahri adopts an armored outfit for the champion that is not at all like any of her other skins. Outside of this new armor plating Ahri boasts a red and white color scheme with her orb appearing blue, familiar to that of other skins. Like most of Ahri’s skins, Challenger Ahri offers a list of unique animations for the character. The skin is also available in a golden chroma.

Part of the Academy skin line, this unique look for Ahri will see her sport school attire. Much like the Star Guardian theme, Academy skins were introduced along with a series of comics that offer new looks for many champions. Most noticeably with this skin are the color changes to Ahri, including the new red hair and simple brown fur on her tails. For just 750 RP this skin is available to purchase for Ahri and offers an impressive look for the champion.

One of Ahri’s newer looks, this skin has grown in popularity largely due to the variations available with different chromas. These chromas offer some of the most notable changes for the champion due to the altering of the color scheme that is most noticeable on the champion’s tails. Outside of this, the skin is a minimalist look for the champion and sees her embrace the flowers in the forest that can be seen on her clothing and headpiece. This skin can be acquired for a price of 1,350 RP.