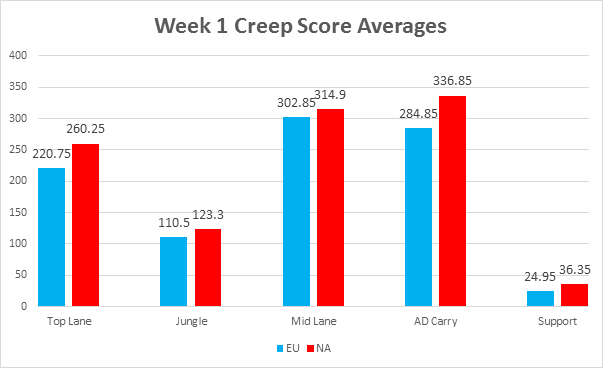 After week 1 of the North American LCS and the European LCS, we look at some interesting statistics that points to the NA = Resident Sleeper theory, and we get some interesting insight into the support meta in NA and EU.

NA = ResidentSleeper : Despite similar average game lengths, EU LCS players have fewer CS than their NA counterparts, presumably due to more grouping and action in the EU LCS games.

What is the worth of a soul? : In Week 1, NA Supports die twice as often as their EU counterparts on average. This may be due to the engaging supports being prioritized in NA (Nautilus, Thresh, Alistar).

Can’t Milk Those : Alistar was a super strong pick this week, winning 9 out of the 11 games he was picked in. By far the best performing support pick.

On average, NA supports have 1 or more deaths than their European counterparts; this is supported by the median deaths statistic. Furthermore, the median assists for EU is 11, which could be from more bottom lane action or due to more teamfights.

In Week 1, NA seemed to have a preference for Nautilus, Thresh, and Alistar, whereas EU was all over the place with support picks. This may explain the amount of deaths NA supports have, as these 3 supports are often used as primary engage and often have to tank a lot of damage, leading to their deaths.

In NA, Thresh was very high priority, picked in 8 of the 10 LCS games. However, both in EU and NA, Thresh’s winrates were very poor. In NA, Thresh only won 2 out of the 8 games he was picked, whereas in EU, Thresh didn’t win any of the 3 games he was picked. The only NA teams that won with Thresh were TL and CLG, the other teams TSM, TDK, GV, T8, C9 all had a loss when they played a game with Thresh (TDK picked Thresh twice).

Alistar, on the other hand, was an apparent OP pick this week, winning a combined 9 out of the 11 games he was picked in. He was picked by CLG, GV, TIP, TSM, EL, FNC, OG, ROC, and SK, with TIP and FNC picking it for both their games.

Disclaimer: The conclusions presented in this article are based on a set of 20 LCS games. This is meant to be a superficial look at Week 1 NA and EU LCS and should be treated as such.