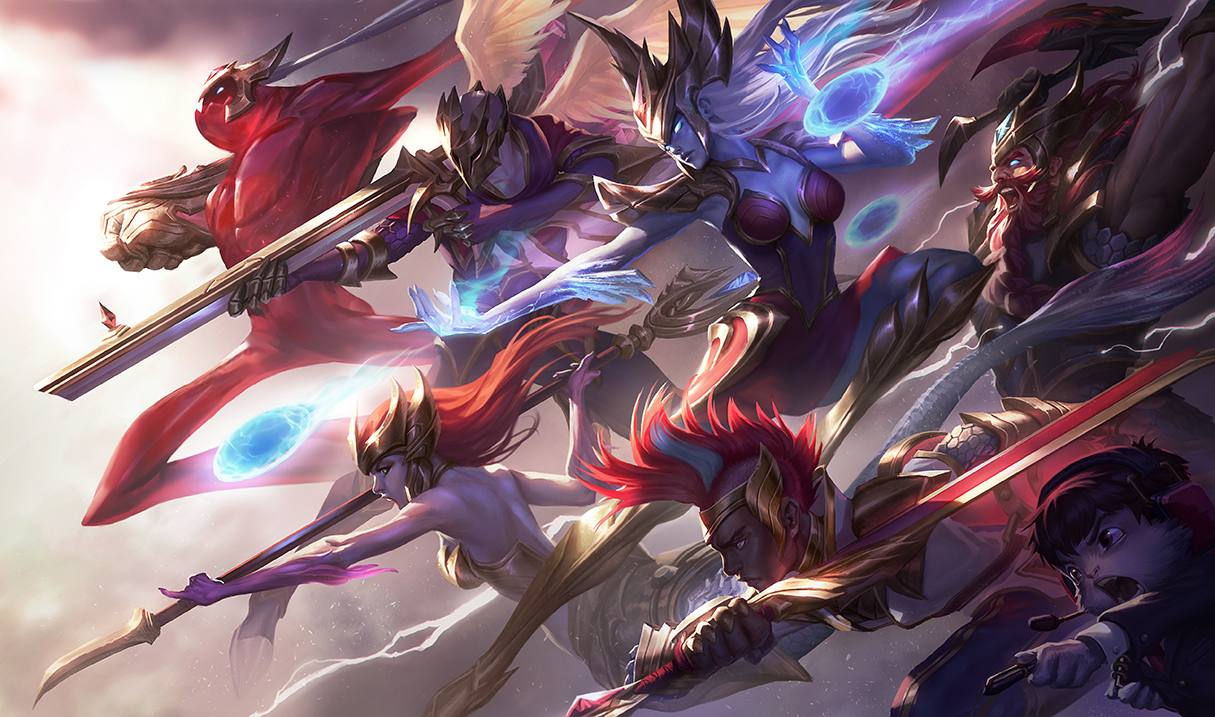 All Images via Riot Games

The 2017 season will likely go down as one of the most important in League of Legends history. Riot had two goals going into the season, and, for the most part, they were met. First, the design team amped up its efforts to update and re-release some of the oldest, most out-of-touch champions. Second, the narrative team stepped up the lore behind each champion, and the players were rewarded with comics, animated shorts, short stories, and much, much more.

Sure, Riot’s efforts on both fronts yielded excellent results for the game’s long-term health, and while all that is definitely super important, something else happened this year. Some of the most badass skins we’ve ever seen before were added to the game, and although that’s not quite as important as storytelling and updating old assets, we’re still going to look cool as hell when we load onto the Rift, and isn’t that what it’s all about?

Here are the nine best skins from 2017, limited to one skin per series.

Joke skins were in abundance this year, and Beekeeper Singed was one of the best. Singed’s skins are mostly very serious and focus mostly on his cruel demeanor and poison, but the thing is, no one actually takes Singed seriously. There’s nothing serious about his playstyle—he runs through three towers at the start of the game just to deny you from farming and spends the rest of his fights baiting and running away from enemies to kill them. Beekeeper Singed does well to make him both look and feel like the meme he deserves.

This year brought with it another series of Star Guardian skins, and Ahri’s stands out as the best among them. Not only did it come with an altered voiceover, new voice lines, and new sound and visual effects, but she also goes through a transformation sequence when casting her ultimate. Oh, and she has a little floating star critter following her around everywhere. The comprehensive features of the skin go beyond most other Star Guardian skins in the game, and for that reason, she comes out above them.

This year, for the first time, the villains of the Arcade skin line, the Battle Bosses, received their own skin line. Battle Boss Brand, the flagship skin, gave Brand an 8-bit makeover, replacing his flames with video game-inspired sound effects, visuals, and an oddly toothy grin. It’s the perfect mix of terrifying and cool, and for that, it earned a spot on this list.

We couldn’t bring up the best skins of 2017 without talking about this year’s SKT skins. In the past, Worlds skins have been pretty lame. Typically, the champions given skins are simply dressed up in athletic gear like tracksuits, sporty glasses, and sweet kicks. This year, however, Riot decided to give the winners of 2016 Worlds skins they’d actually be proud of. All of the skins are great, but Jhin stands out, mostly, because he sprouts wings when he uses his ultimate ability, and that level of extra can’t be overstated.

Beekeeper Singed wasn’t the only fantastic joke skin released this year. Moocow Alistar went live for April Fool’s, and it’s one of the best joke skins in the game’s long history. Not only does nearly every Alistar player in the game sport this skin now, but even pros seem to flock to it in the competitive scene, and they spam the cowbell emote in lane just like the rest of us do. There’s just something about big and beefy Alistar dressed up in some onesie pajamas and a usable cowbell that speaks to us all.

There has only ever been one Pulsefire skin, Pulsefire Ezreal, so when Riot announced the first Pulsefire skin in five years was coming for Caitlyn, fans went wild. Back when Ezreal’s skin was released, it was top of the line. The altered abilities, special voiceover, and effects were nothing that had been seen before in a skin, but as other, more updated skins were released over the years, Pulsefire Ezreal became steadily less impressive. Pulsefire Cait blew Ezreal out of the water, and secured her own spot as one of the best skins of the year.

Nightbringer Yasuo and Dawnbringer Riven are part of a brand new light vs. dark skin line, and they knocked it out of the park as the first series. Both skins also brought with them a brand new event and the beginning of in-game missions, where players needed to complete certain objectives and sport icons for either the light or the darkness, and the winning side at the end of the event received a special reward. Both skins are awesome in their own right, but we gave Yasuo the edge for his oh-so-satisfying custom ultimate ability.

It finally happened. Yorick received his first skin in six long years, and it is so damn cool. Not only does it flop Yorick to fight for the side of the light instead of death and decay, but it also changes his little minions to match. There were only Arclight skins for Varus, Vel’Koz, and Vayne so far, but Arclight Yorick seems a notch above them. Custom abilities, sound effects, and a recall turn this skin into what it is: a masterpiece for a champion that desperately needed a new skin.

The best skin of the year, hands down, is God Fist Lee Sin. This Ultimate skin costs more than most skins on this list at a whopping 1,820 RP, but it’s clear that a lot of effort went into it. Everything is changed, from ability effects all the way down to movement and idling animations. The new voiceover and voice lines perfectly portray the cocky arrogance that this new divine Lee Sin has, and in both personality and design, this skin alone feels like it could be its own champion.