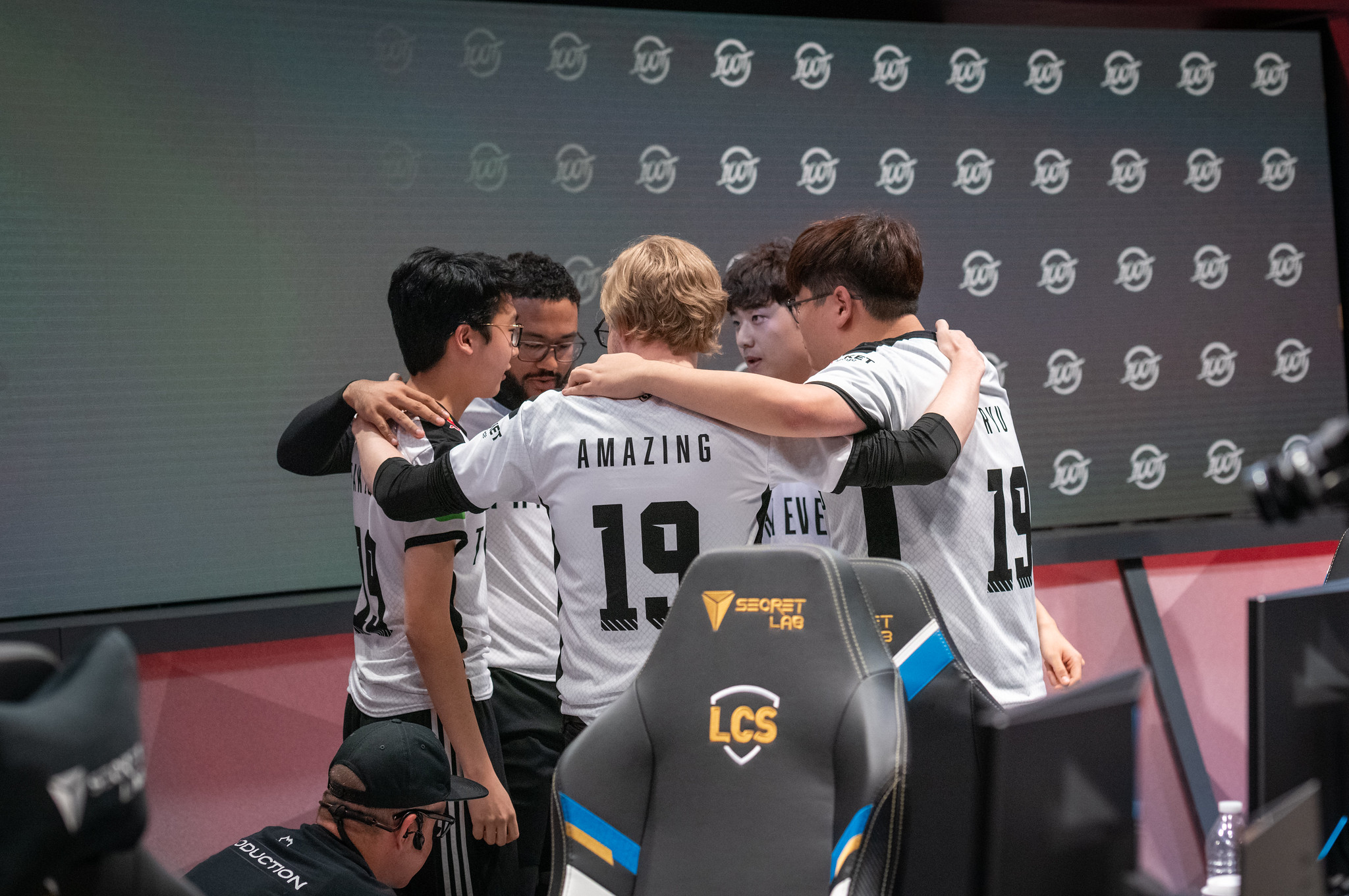 When 100 Thieves finished the 2019 LCS Spring Split in last place, we knew that something had to change. In fact, we wrote about how much they’d learned from their failures and what they should do about it.

On the face, they’ve heeded much of that advice. Three-fifths of the roster has been turned over since the end of the Spring Split, and the team is in sixth place, playoff territory. That’s great news right?

Well it’s certainly good for them. But it’s also an indictment on the rest of the LCS. Because when looking closely at what’s happening, it appears that North America is once again one of the weakest regions in the world.

A few weeks ago, 100 Thieves’ new rookie top laner Aaron “FakeGod” Lee caused a minor stir within the League community when he tweeted “win lane lose game” after a loss to TSM.

This became a thing when TSM top laner Sergen “Broken Blade” Çelik clapped back on him. The whole issue was inane—FakeGod was clearly jokingly referring to how he usually lost lane even in 100 Thieves’ victories.

FakeGod has improved a ton and he’s super young. But still, he hasn’t yet shown that he’s a viable LCS laner. His lane numbers are terrible, he’s third-worst in deaths-per-game, and he does no damage. He’s playing the role of a ward bot who loses lane gracefully but has an impact in later teamfights.

Except that’s not what he’s doing. He’s playing stuff like Aatrox, Neeko, Kennen, and Jayce, all champions that love to get aggressive in the early levels. It should be nearly impossible for 100 Thieves to win with such a deficit, and yet here they are, 6-4 with FakeGod in the lineup.

Professional League teams have gotten better and better at exploiting the weak side of the map. A player like FakeGod should be a magnet for the enemy jungler. Not necessarily to kill him, but to take over the top side of the map and make life difficult for 100 Thieves jungler Maurice “Amazing” Stückenschneider.

Instead, 100 Thieves are hardly being punished at all. Amazing is still able to farm and he’s refocused his attention around mid and bot. Again this isn’t a criticism of FakeGod at all. But it is interesting to look at the state of NA top lane right now.

The state of the competition

Who even is the best top laner in the region? That conversation has to start with Liquid’s Jeong “Impact” Eon-yeong, who just refuses to lose. He certainly provides a lot to his and has diversified his champion pool this year.

And then what? None of the guys below that tier have shown much consistency at all. And it’s not just top lane. Mid lane is a mess too. Nicolaj Jensen is playing well for Team Liquid, but how much are his numbers propped up by the fact that his team is good?

Jensen’s longtime rival Søren “Bjergsen” Bjerg is another player below his normal level. And veterans like Eugene “Pobelter” Park, Liquid’s mid last year, is having a nightmare of a split. All of that turmoil has allowed 100 Thieves to solidify their own mid lane behind Yoo “Ryu” Sang-wook, who went from coaching to being unexpectedly pressed back into service.

Again, this type of stuff shouldn’t work, and it’s not a dig at Ryu at all. He’s been fantastic. But 100 Thieves shouldn’t be able to plop a coach—and someone they actively moved from last offseason—into the most important position on the Rift and all of a sudden go on a winning streak. The fact that they have is damning statement on the state of the rest of the mid lane pool. Meanwhile, Europe, South Korea, and China have built their own player pools despite seeing imports continue to flock to North American shores.

It’s no surprise that North America is the weakest of the major regions, excluding the LMS. Their international results don’t lie. But if anything, the chaos that we’ve witnessed this year begs the question: has NA actually outperformed at big tournaments like Worlds?

And it’s not just 100 Thieves. Last-place Echo Fox made the playoffs last split—how do you explain that? Last year, Clutch Gaming went from upsetting TSM in the playoffs in the spring to ninth place in the summer, just a game out of last. There’s no consistency and no semblance that, outside of Liquid and maybe C9, these teams have a clue.

And then a team like Liquid will pull off a massive upset at MSI or Cloud9 will go on a deep Worlds run and it will seem like all is well. But that’s just irrational overconfidence and results-based analysis. The more the region is propped up by the teams at the top, the worse things will be. And when those teams eventually fail, the LCS is going to crash, hard.

There aren’t any quick fixes to this situation. Doing what 100 Thieves did, going all-in on veterans, can work for a split, or even more. But unless the region grows comfortable with a whole host of imports and pushes the boundaries of Riot’s interregional movement policy, those are band-aid solutions.

The longer play is to find more players like FakeGod that might be able to make it and focus all you have on their development. That’s one area where the LCS has come a long way with its Academy league, but still has a long way to catch up. If you can continue to grow that scene, maybe the next FakeGod will come in as a laning beast instead of a liability. And maybe the teams will make such promotions out of curiosity and strategy, not desperation.