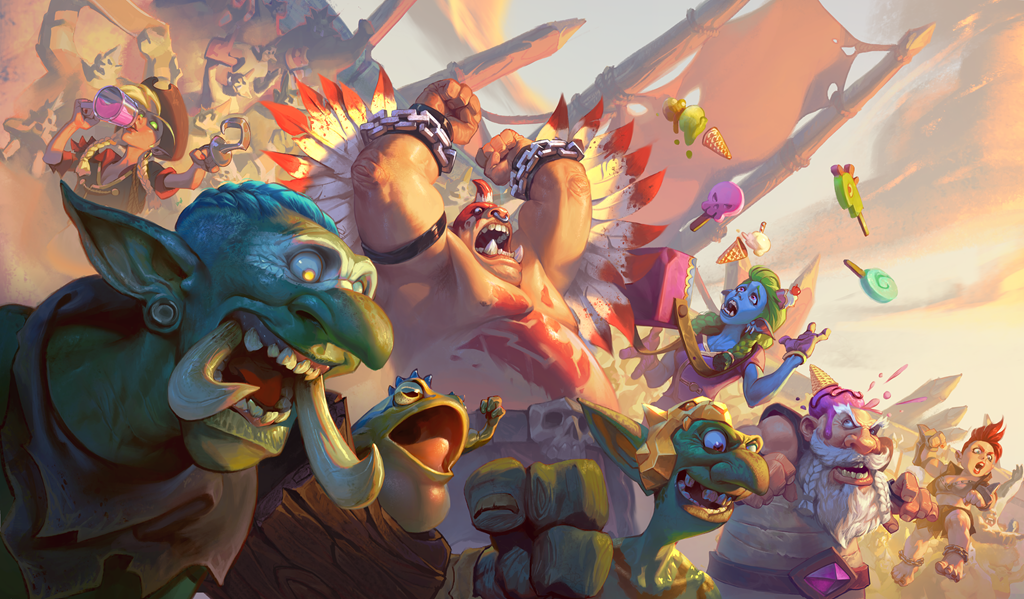 Paladin players will be pleased to learn that Rastakhan’s Rumble has brought some much-needed support to One Turn Kill Paladin, and it’s been smashing the ladder all week. While there are a variety of different deck lists floating around, this one seems to be the most prominent.

OTK Paladin is a deck designed around surviving until you have the ability to completely finish off your opponent in one turn. This is done through Uther of the Ebonblade. A hero type card, Uther is a nine-cost that gives you five armor and has a Battlecry that lets you equip a 5/3 weapon with Lifesteal.

The new hero power you gain after playing Uther is where the real fun begins. Uther will change your hero power so that you can use it to summon one of four horsemen. If you have all four horsemen on the board at one time, your opponent loses the game. If you played Yugioh, you might remember all five pieces of Exodia. Now it’s Hearthstone and all four horsemen of the apocalypse.

The primary issue with OTK Paladin before Rastakhan’s Rumble was survivability. Getting all four horsemen on the board while also protecting your life total was incredibly difficult with the cards available at the time. Anyone running OTK prior to Rastakhan’s would also be doing so in a meta that favored rush down decks like Odd Paladin and Zoo Lock.

Thanks to Rastakhan’s Rumble, however, OTK Paladin is now a force to be reckoned with. The main support Rastakhan brings to this deck comes in the form of three cards: High Priest Thekal, Shirvallah, The Tiger, and Timeout.

High Priest Thekal is a three-cost 3/4 with a Battlecry that converts all of your health but one into armor. This means if you play him when you have 30 health, you’ll instead have 29 armor and one health. This allows you to use your healing abilities to get all the way back up to 30 while your opponent is forced to chip away at your armor.

Shirvallah, the Tiger is a 25 cost 7/5 with Divine Shield, Lifesteal, and Rush. Shirvallah also has an effect that makes him cost one less for each mana you’ve spent on spells in the game. This means he will usually be very low cost or free by the time you play him.

Time Out is what many players are calling the new Ice Block. This is a three cost spell that will make your hero immune for one turn. This card gives you more time to pull off your combo and helps hold off what could be lethal damage.

The core win condition of this deck involves three main cards: Uther, Ancient Brewmaster, and Zola the Gorgon. Once Uther is on the board and you’re churning out horsemen, you’ll need a way to keep them alive. Ancient Brewmaster is a four-cost 5/4 that lets you send a friendly minion on the battlefield back to your hand. Zola The Gorgon is a three cost 2/2 that lets you add a golden copy of a minion to your hand.

This deck does well against aggro and other control decks thanks to all the survivability Rastakhan’s has given it. Shirvallah is a fantastic way to gain health by using its Rush mechanic combined with its seven Lifesteal.

As far as your mulligan goes, you’ll actually want to keep as many spells as you can afford to. Spells like Call to Arms and Timeout will be essential to lowering the mana cost of your Shirvallah so that you can drop him for cheap in the late game. If you feel like you’re not playing against a super fast deck you can keep Uther of the Ebonblade. This will allow you to get your combo rolling as soon as you’re able to drop Uther.

The key to this deck is using your survivability at the right time so that your combo is able to eventually go through. This deck has gained prominence on Twitch over the past week thanks to it being so fun to watch. If you’re struggling with using this deck in specific situations, watching more skilled players use the deck on Twitch is a great way to learn. If you can master the art of staying alive with this deck, then you’ll be crushing opponents on the ranked ladder in no time.