Hearthstone’s Patch 21.6 is a large-scale update for all of its game modes and is arriving Nov. 2. The main appeal of this patch is the upcoming mini-set for the United in Stormwind expansion, which is themed after the Deadmines in Westfall.

Similar to previous mini-sets, this one will be available for either $14.99 or 2,000 gold. Players unable to buy the mini-set through this method can find these cards in their United in Stormwind packs. The Deadmines mini-set will release Nov. 2, and players can expect four legendary cards, one epic card, 14 rares, and 16 commons. Aside from the major constructed update, there will also be the expected seasonal event with Battlegrounds and Duels that were teased last week.

When the set arrives, the current pool of Arena cards that players will be able to draft from are being changed to the following: 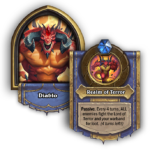 Battlegrounds will be adding two new heroes, Sneed and Cookie, in addition to the temporary special event Diablo joining the pool. Between the two, Sneed has a lot of early tempo potential to win fights due to his ability to give friendly minions potent Deathrattles to spawn more tokens during combat. As this is a permanent buff, you can bless your minions that are most likely to stay first before others. Cookie will reward economy-based players who know what they are looking for, but the price of offering up three minions may be too steep to pay.

While Diablo will be accessible to everyone when the Patch goes live Nov. 2, players will need Battlegrounds Perks in order to be able to play Sneed and Cookie the Cook before they’re officially released on Nov. 16.

Mercenaries will be receiving its first content update, adding five new characters for players to unlock and three new bounty bosses to challenge: Highlord Omokk, General Drakkisath, and Rend Blackhand. The new mercenaries are themed around the Deadmines with characters like Edwin, Mr. Smite, and Cookie.

The overall makeshift of heroes is two Protectors (Smite and Sneed), two Fighters (Edwin and Eudora), and one Caster (Cookie). Aside from the new characters that players will be able to find in packs or coin collections, there are three new bounties in Highlord Omokk General Drakkisath Rend Blackhand

Book of Mercenaries will also be receiving a new chapter in the form of Cariel Roame on Nov. 9. She follows the story of her sister Tamsin.

For fans of Duels, there will be 24 changes to current treasures that players can find throughout the run, one of the most ever done since the mode’s inception. In addition to this, the rating of all players will be reset (hidden matchmaking ranking should remain similar) and the pool of eligible cards to build with the starter deck will expand to include the new Deadmines mini-set.

A quality of life change that all players will find is that the original Scholomance Heroes will have all their unlock requirements removed, making it much easier to hop into the mode.

Hearthstone: United in Stormwind’s Patch 21.6 will launch Nov. 2 with all of the new events and content.