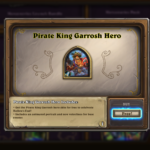 Aside from the free skins, spooky-themed Tavern Brawls will be in rotation in the coming weeks, with a new Hallow’s End Brawl on Nov 3. Players will set up a play with their own actors and perform a production with the Headless Horseman playing a role.

In non-constructed game modes, players can expect an exciting shake-up to occur within their favorite mode. For Arena-enthusiasts, Dual Class Arena returns. For those who haven’t experienced the format, an initial class is picked and then a second class is selected for your Hero Power. Afterward, you’re allowed to draft cards from both options.

Similar to how Mercenaries introduced a Diablo crossover to Hearthstone, Diablo himself will join the fray for both Battlegrounds and Duels solely for the event. Fans of Battlegrounds will have a new raid boss hero where every four turns, other players in the Tavern will try to take down your warband, including the Lord of Terror. Players who defeat you may claim a treasure, but you’ll gain a reward for each opponent you slay.

Players who enjoy Duels will get a chance to play the first dual-class hero in the form of Warrior and Warlock through Diablo. Blizzard also said there will be unique Hero Powers and signature treasures to select from that are unlocked as you play. There will be more announcements for Duels fans when Patch 21.6 goes live at a later date.

In addition to the temporary changes to all of these modes, a Legendary Quest chain will happen at a later date where players can collect four different packs (two of which are Standard and two are United in Stormwind).

Arena, Battlegrounds, Duels, and this Legendary Quest chain all begin on Nov. 2.

Hallow’s End in Hearthstone is now live. Players have until Nov. 9 to claim their free Garrosh portrait and the chance to obtain a free Battlegrounds Guff skin starting on Oct. 26.