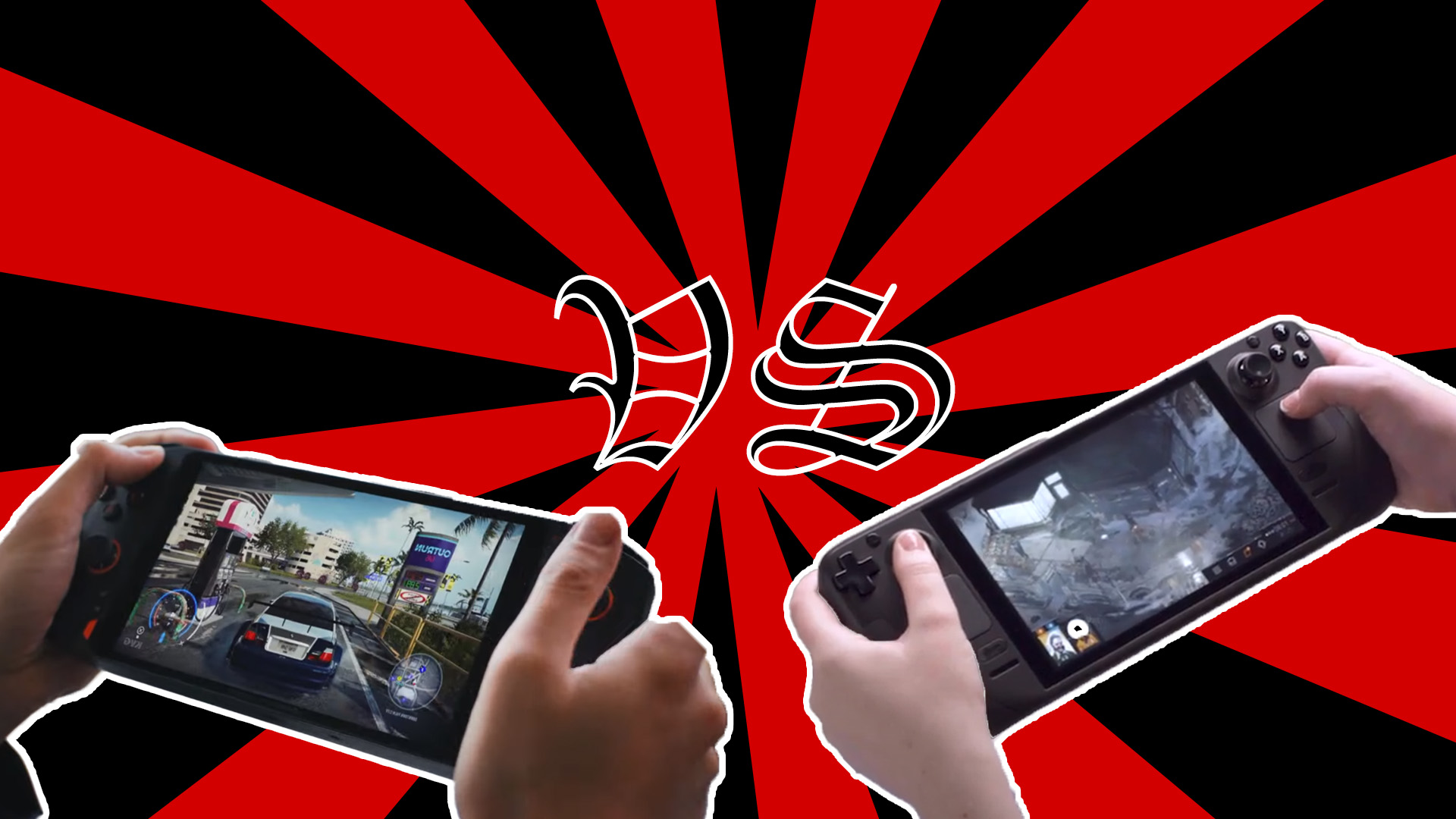 Images via One-Netbook and Valve

With the Steam Deck’s official release just a few days away, the lucky few who preordered Valve’s new handheld PC at launch last summer should be getting their consoles. Valve however, isn’t the only manufacturer making handheld PCs.

The Chinese company, One-Netbook, already has a handheld ready for purchase in the ONEXPLAYER Mini. Both systems share similar features but vary greatly in their respective hardware. This article breaks down which device has the overall better specs of each handheld PC for gaming-on-the-go.

The ONEXPLAYER Mini has an 11th generation Intel i7-1195G7 processor. It has four cores and eight threads, with a base clock of 2.9GHz and a max clock of 5GHz. The performance of this CPU isn’t going to match desktop performance, but it is powerful enough to run the latest games without bottleneck issues.

Steam Deck’s CPU is a custom AMD APU that uses the Zen 2 architecture. APUs contain both a central processing unit and a graphics processing unit, suitable for mobile devices like slim or ultra-slim laptops. However, the downside to APUs is the lack of dedicated processing from a discrete GPU.

Steam Deck’s CPU runs with four cores and eight threads at a base clock speed of 2.4 GHz and a max of 3.5GHz. A close equivalent to the APU is an AMD Ryzen 5 4680U, though it has two fewer cores. Based on the benchmarks of the latter from notebookcheck.net, an inference can be made that the game performance of the former will be similar.

ONEXPLAYER takes the win with better overall performance based on available benchmarks for the APU. Its i7 Tiger Lake CPU can reach higher clock speeds and perform more computations per clock than the custom APU in the Steam Deck, giving it a slight edge in performance.

Although Intel is launching its first wave of discrete GPUs in 2022, its older integrated GPUs are still lacking compared to what AMD has done with its latest product generations. ONEXPLAYER Mini uses an Intel Xe 96, which is closest in performance to a GeForce MX450. While it can run 1080p graphics, average frame rates won’t reach above 30 fps.

Steam Deck uses an RDNA 2 architecture GPU with eight compute units at a base frequency of 1GHz and a max of 1.6GHz. Unlike Intel, AMD GPUs have advanced in recent years due to the new RDNA architecture, but it only recently added RDNA 2 to its latest line of laptop graphics cards. Early benchmarks show that the Steam Deck can handle 1080p resolution at 30 fps or 60 fps at 720p.

While the CPU excels for the ONEXPLAYER Mini, the Steam Deck shines brighter with its GPU. RDNA 2 has proven to be a game-changer for performance in AMD-powered mobile devices. Intel Xe graphics can’t match them and for that reason, Steam Deck wins in this category.

The 7-inch IPS display for the ONEXPLAYER Mini has a native resolution of 1920 by 1200. The manufacturer doesn’t list the refresh rate, but it’s more than likely that the touch-enabled screen has a minimum of 60Hz. When you consider the 100 percent sRGB color gamut at 323 PPI, this screen is among the best available for a handheld gaming machine.

Like the ONEXPLAYER Mini, the Steam Deck also has a 7-inch IPS screen that refreshes at 60Hz. Its native resolution however, is 1200 by 800. Its important to note that the lower resolution can provide better battery and game performance and Steam Deck’s screen is touch screen enabled.

Interested parties can buy the ONEXPLAYER Mini with 512GB, 1TB, or 2TB SSD storage. The higher storage options are more expensive, but each model will use the same specs. The ONEXPLAYER Mini does not have an expansion slot, but USB 4 Type C compatible external storage drives will work as it does on a traditional PC.

Valve offers three storage options like One-Netbook. However, the lowest-priced model uses a 64GB eMMC (Embedded Multimedia Card), while the mid-priced 256GB model uses an M.2 SSD and the most expensive 512GB model uses a high-speed M.2 SSD. Each of the SSD models uses a 2230 M.2, respectively. While there isn’t an expansion slot for an additional M.2 SSD, ports are available on the handheld PC, its official dock for external storage, or high-speed SD cards.

ONEXPLAYER Mini offers more space to download games and other applications over the Steam Deck. A max size of 2TB compared to 512GB is a clear win for One-Network’s handheld PC.

Powering the ONEXPLAYER Mini is a 10,455mAh battery. Battery length depends on the usage by the system—similar to gaming laptops— but One-Netbook claims it can handle up to eight hours of video playback. If running the latest games, however, the battery may only last about two to three hours. Recharge times for the ONEXPLAYER Mini are relatively quick—it can recharge up to 50% in about 20 minutes or fully charge in an hour.

Valve put a 40Whr battery into the Steam Deck, which is capable of two to eight hours of gameplay, according to Valve. These estimates are based on specific parameters, meaning different setups can yield different discharge rates. Recharge time for the handheld PC can take about three hours, according to Gamespot.

It’s hard to determine a winner for the battery life since there are many variables to account for. ONEXPLAYER Mini has quicker recharge times, but certain games will drain the battery fast. The same thing applies to the Steam Deck. It appears to have longer recharge times but could handle longer gaming sessions since estimates are based on game usage—not just video playback.

For the RAM, the ONEXPLAYER has 16GB of LPDDR4x dual-channel memory. This mobile version of DDR4 offers less performance than its desktop counterpart, but it has a lower power consumption rate to make up for it.

Valve used the faster and more efficient LPDDR5 in the Steam Deck. LPDDR5 provides a faster data speed and less power consumption over both LPDDR4 and LPDDR4x. It can’t match DDR5 performance, though. Like the ONEXPLAYER Mini, Steam Deck utilizes 16GB of onboard RAM, which isn’t expandable.

Windows 11 comes automatically loaded on all newer ONEXPLAYER handheld PCs. The device can handle all of the standard applications a desktop can since it does use Windows. Linux-based operating systems will also work on the ONEXPLAYER mini.

The ONEXPLAYER Mini can operate like a standard PC like the Steam Deck. However, it doesn’t appear to share the same console-like integrations that SteamOS does. It could emulate a Steam Deck-like experience through Steam’s Big Picture mode, though.

Rather than using Windows, Valve will ship its newest version of SteamOS 3.0 -a proprietary Linux-based operating system- with the Steam Deck. SteamOS is the same operating system that the original Steam Machines used but updated after two years without one.

SteamOS’s main appeal is converting a PC into a Steam Machine—essentially a dedicated gaming PC with a console-like interface. With 3.0, the Steam Deck can run games that use Windows through the Proton Windows compatibility software. Additionally, the OS was designed for living room use, making docking the Steam Deck more appealing.

SteamOS has a lot of potential in becoming what Valve initially intended for its Steam Machine through Steam Deck. Whether or not the SteamOS becomes more viable in the future is unclear, though. Nevertheless, most PC players use Steam as their primary platform for downloading games, making the native integration a winning addition to the Steam Deck.

Like the Switch and other handheld gaming systems, the ONEXPLAYER mini has a set of face buttons and directional buttons for the controls. Players can also use the on-screen touch controls if they choose. The thumbsticks are Japanese-made ALPS rockers that have an 18-degree rocking tilt. Their design is a standard convex surface at a height of 7.5-millimeters.

Other gaming-specific features include rumble, tactile bumpers, linear triggers, and a turbo boost function. The turbo increases the wattage draw of the system to boost performance, though it may not work in every case.

Valve’s handheld PC offers multiple control schemes for the player. In addition to the convex thumbsticks, face buttons and a d-pad, Steam Deck has two trackpads for more precise mouse movement. Players can use either the trackpads or thumbsticks interchangeably without issues. Additionally, the system comes with a gyroscope that works well with high-precision or immersive games.

Steam Deck is also capable of acting like a traditional gaming console by using its official dock. It can suspend a game by tapping the power button, and the system will remember where the player left off.

Steam Deck takes the win in this category with a better suite of gaming-specific features that the ONEXPLAYER can’t match. The addition of the trackpads and gyroscope keeps it in line with the Switch as a handheld gaming system and a handheld PC.

While the ONEXPLAYER does have a better CPU, display and storage options, there are caveats. Games will almost always rely more on the GPU. If the game can’t run well on higher resolutions, then the higher fidelity screen isn’t utilized as it should.

The use of RDNA 2 in the Steam Deck’s iGPU allows for a broader range of games to run well for much cheaper. For this reason, the Steam Deck has the better specs as a gaming PC.