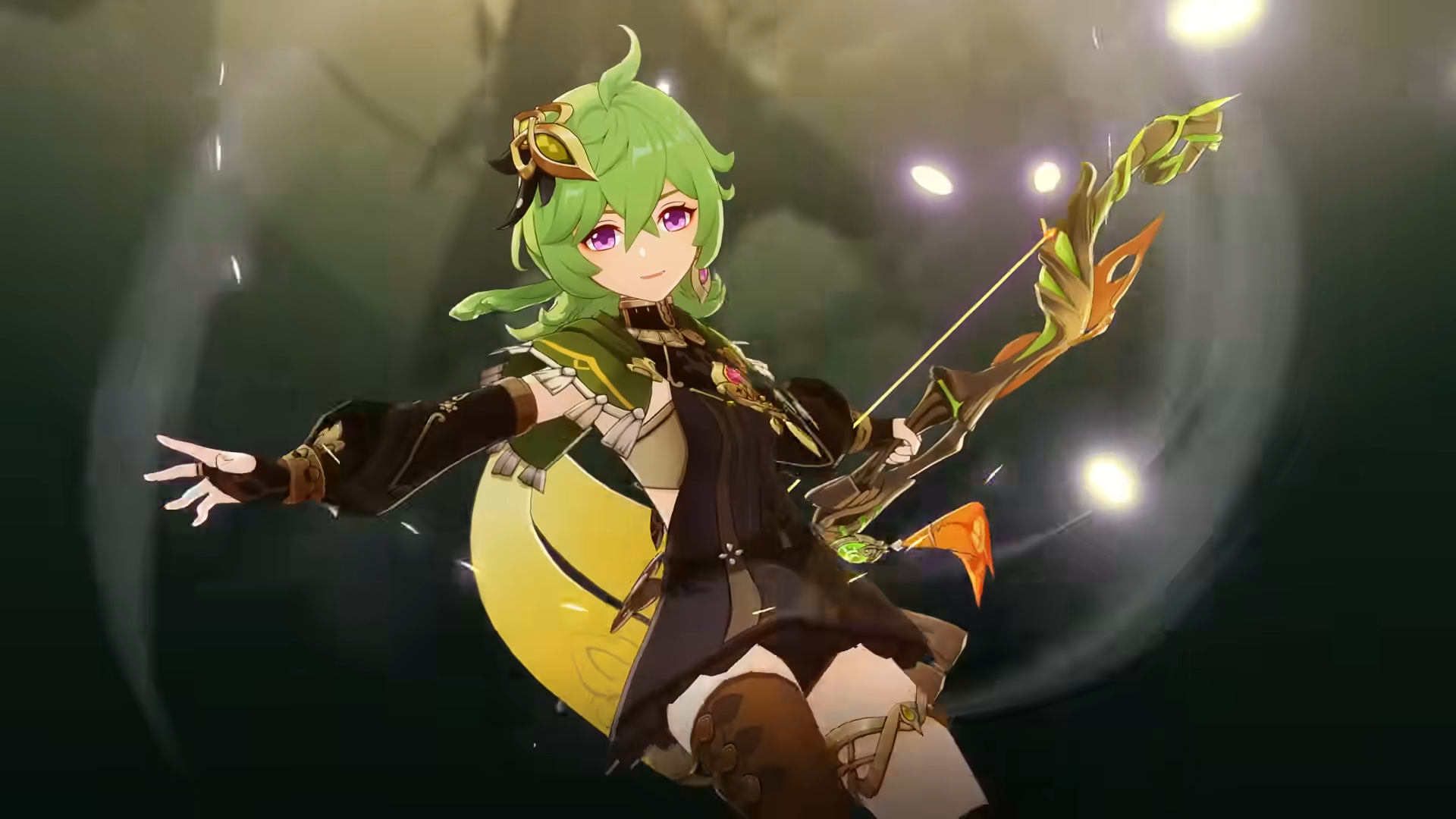 Collei has a troubling past that oftentimes makes her come off as pessimistic and cold. She was born sickly and her parents thus took her to a seer for help. But the seer was working with the Fatui and tricked them by promising that he would help her when he instead had ill intentions.

The seer gave Collei to the notorious Fatui Harbinger Il Dottore who then used her as a test subject for his Archon residue experiments. What happened after this is unknown, but at some point, Collei either escaped or they let her go and she found herself a lost wanderer.

The disease that Collei is afflicted with is called Eleazar, which is a Sumeru disease that causes dark scales to form on one’s body. Its primary symptoms include fatigue and numbness of body parts, which is why Collei is often perceived as clumsy by others.

The final stages of Collei’s disease result in full paralysis. It is not curable and only preventative methods can be done to keep it at bay for as long as possible. But when she was a prisoner to the Fatui, Il Dottore was able to fully control the disease. How he did it and what his methods were are unknown, however.

Collei functions best as the secondary damage dealer on the team as well as somewhat of a support character. Her build thus needs to be one that increases her damage output and helps her bolster the rest of the team.

Because Collei is a four-star character, players should try to equip her with a five-star weapon if possible. This will drastically improve her performance. But since getting five-star weapons is no easy task, players can also use a number of solid four-star substitutes.

When the wielder of this bow performs a normal attack, charged attack, elemental skill, or elemental burst, they will then gain one stack of Ashen Nightstar for 12 seconds afterward. A different attack buff will be gained depending on how many stacks are present.

This five-star bow has the special “At the End of the Beast-Paths” effect that grants a 12 percent elemental damage bonus. The wielder of this bow will also gain the Tireless Hunt secondary effect when they hit an opponent with a charged attack.

This secondary ability increases charged attack damage by 160 percent of elemental mastery. It will last for 12 charged attacks or for 10 seconds. One new instance of Tireless Hunt can be attained every 12 seconds.

The five-star Elegy for the End bow is an excellent choice for building Collei’s abilities, especially since she is a four-star character. “The Parting Refrain” ability of this bow increases elemental mastery by 60.

Once the wielder of Elegy for the End has four Sigils of Remembrance, they will all then be consumed and nearby party members will receive the secondary Millennial Movement: Farewell Song effect for 12 seconds. This effect increases Elemental mastery by 100 and attack by 20 percent. Once it has been activated, players cannot gain more Sigils of Remembrance for 20 seconds.

This four-star bow has the special “Labyrinth Lord’s Instruction” ability that grants players the secondary Teachings of the Forest effect after unleashing an elemental skill or burst. This secondary ability increases elemental mastery by 60 for 12 seconds and can also end when players switch characters.

When Teachings of the Forest ends, it will then deal 100 percent of attack as damage to one opponent that is close by. The Teachings of Forest effect can be activated once every 20 seconds.

The “Arrowless Song” ability of this four-star bow increases elemental skill and burst damage by 24 percent. It is quite a simple bow but works great for building Collei’s damage output.

Collei’s artifacts can drastically change how she functions in battle. Thus, players should choose carefully and test out different builds until they find the one that best suits her function alongside the rest of the team.

The two-piece Deepwood Memories set is an excellent option for Collei because it grants a 15 percent Dendro damage bonus. This makes it a great option either alongside the other two pieces of this set or another two-piece set entirely.

Equipping the full four-piece set decreases enemies’ Dendro resistance by 30 percent for eight seconds after an elemental skill or elemental burst hits an enemy. This ability may be activated even when the character this set is equipped to is not active on the battlefield.

Gilded Dreams is another solid option for Collei. The two-piece set increases elemental mastery by 80.

The full four-piece set grants buffs within eight seconds after an elemental reaction has been activated. These buffs vary depending on what element each party member has and are as follows.

These buffs will be counted on up to three characters and can be triggered once every eight seconds. It can trigger regardless of whether the character this set is equipped to is actively on the battlefield.

One of Collei’s most essential Ascension Materials is the three levels of Arrowhead, which are one of the easiest materials to obtain because they are dropped by Hilichurl Shooters. Rukkhashava Mushrooms, another one of her required resources, are a Sumeru local specialty that can be found around Lokapala Jungle.

Majestic Hooked Beak can be obtained from taking on the Jadeplume Terrorshroom in Sumeru. Although this foe is a late-game one, it is surprisingly easy compared to other enemies that have been released later on in Genshin Impact.

Various levels of Arrowhead are also needed for Collei’s talents. Luckily, this resource is abundant all across Teyvat since Hilichurl Shooters can be found pretty much everywhere.

All levels of Teachings of Praxis, another required resource for Collei, can be obtained from the Steeple of Ignorance Domain on Sundays, Wednesdays, and Saturdays. They can also sometimes be obtained from opening chests around Sumeru.

Although Collei is a Sumeru character, fully raising her talents will require players to return to Inazuma. Players must face Raiden Shogun in her “End of the Oneiric Euthymia” Trounce Domain to obtain the necessary Tears of the Calamitous God.

Players will need to gather a total of 1,652,500 Mora, six Firm Arrowhead, 22 Sharp Arrowhead, 31 Weathered Arrowhead, three Teachings of Praxis, 21 Guide to Praxis, 38 Philosophies of Praxis, six Tears of the Calamitous God, and one Crown of Insight to fully raise all of Collei’s talents.

As of Aug. 24, 2022, Collei is available as a featured four-star on Tighnari’s special event featured banner “Viridescent Virgil,” as well as on Zhongli’s featured “Gentry of Hermitage” banner. Both banners run until Sept. 9, at which point Collei will move to the pool of four-star characters within the permanent “Wanderlust Invocation” banner.

Players hoping to recruit the Dendro Bow character should do so before her run as a four-star with an increased drop rate ends. Otherwise, players will be battling luck if they hope to pull her from the pool of over 20 four-stars within the “Wanderlust Invocation” wish.