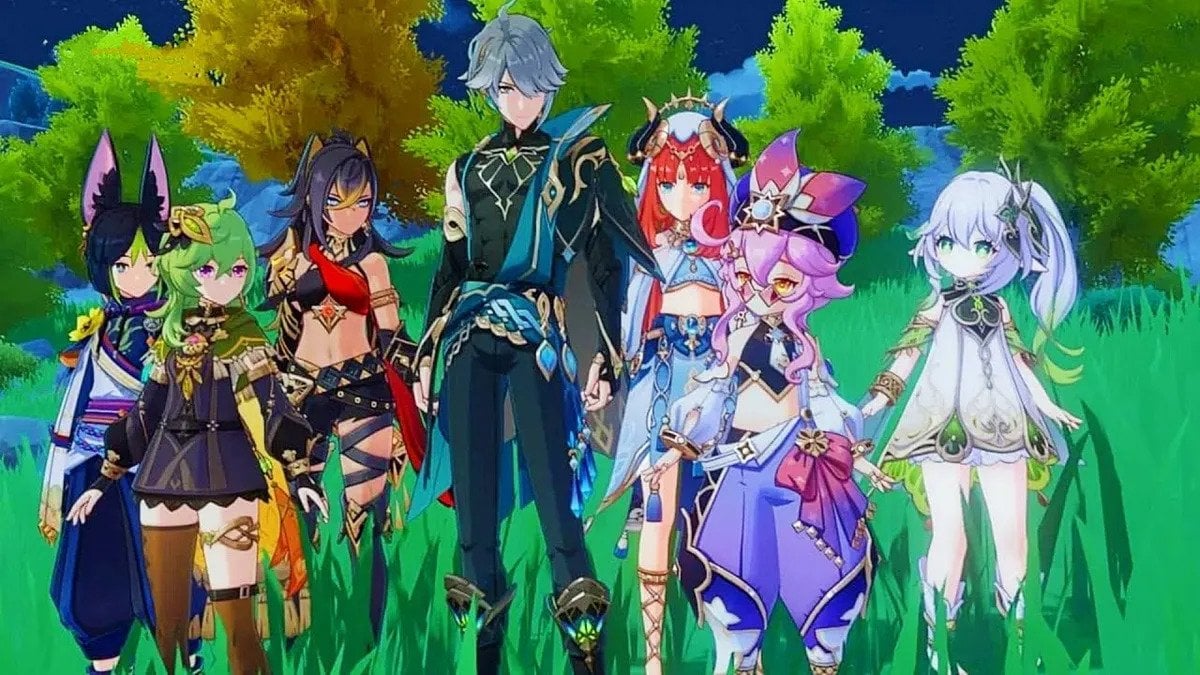 Genshin Impact is 2020’s sleeper hit of the year, with this open-world, gacha-style RPG racking a massive fan following in a short span of time. The beautiful open worlds and the multitude of playable and non-playable characters make for a fantastical experience for players old and new.

When it comes to battling, characters use their weapons to deal physical damage and elements to deal magic damage.

There are a total of seven different elements in Genshin Impact, with each character utilizing one of them as their primary element in battle. Each of these elements represents an existing force in nature and the characters have a natural attunement to them.

These are all of the elements in the game.

Out of all the seven elements, Dendro is quite the elusive element in Genshin Impact. There are only a handful of characters that utilize Dendro as their main element and it looks like more of them will be revealed in the upcoming updates. These are all the Dendro characters we know of so far.

All Dendro characters in Genshin Impact

Dendro as an offensive element was given to characters fairly recently, with the exception of one: The Traveler. That’s right, your character has access to the Dendro element in battle, unlike the other characters who are based on one of the other six.

That has changed with recent updates, with new Dendro-wielding characters being introduced to the game. In the last couple of months, we were introduced to Collei and Tighnari, with many more Dendro characters primed for release on the horizon.

These are the currently existing Dendro characters in the game.

Collei is the star of the Genshin Impact manga and the first Dendro character introduced in the game. She is a four-star bow-wielding Dendro character that deals powerful damage over time and elemental bursts of Dendro damage. Her quest for vengeance against Barnabas, an agent of the Fatui, is one of the driving forces behind the manga’s main story.

Tighnari is the mentor of Collei and is a much more experienced Dendro user. He is a five-star bow-wielding Dendro character and is the Avidya Forest Watcher. Nothing is more important to Tighnari than protecting the forests his people live in and in that regard, he is also the lead ranger of the Dawson Rainforest.

The protagonist of the game can either be male or female, depending on whether you choose the brother or sister to start out with. Dendro is one of the seven elemental attributes you can utilize in battle if you so choose. The Traveler is the same in every iteration, except in this one, they use the Dendro sword to deal massive amounts of elemental damage.

These are the characters that don’t exist in the game yet but will be released in a future update. Most of them have already been teased in some form of media from the HoYoverse.

With the introduction of the Sumeru region, a plethora of characters was teased in various trailers to hold important roles throughout the story in upcoming updates. One of them was Al Haitham, a character that players will meet in Port Ormos while traversing the lands of Sumeru.

From the trailers, we can tell that Al Haitham is a Dendro user because of the Dendro Vision attached to his clothing. He is also found to be fighting with a sword in the trailers, so it is safe to say that he will be another sword-wielder. As far as rarity goes, we know nothing so far but we will learn more in the upcoming updates. His release date is yet unknown.

Baizhu is the owner of Bubu Pharmacy in Sumeru. While he functions as an NPC now, he also possesses a Dendro Vision similar to Al Haitham. This shows that Baizhu has the potential to be a playable character in the future, so keep an eye out.

Further supporting this claim is his deep knowledge of medicine and healing herbs. This indicates that he has the potential to be a strong support or healer with powerful Dendro abilities to back him up. The idea of an NPC turning into a playable character would not be unheard of, with the same thing happening to Yun Jin. We will keep you informed as we learn more.

Kusanali is the Dendro Archon and quite possibly the lord of Sumeru, although this is unconfirmed. She has been mentioned a few times by characters, with Yae Miko calling her the deity of Sumeru and Ganyu calling her the youngest Archon in history. Nothing else is known about her for the longest time since she was teased but that has now changed.

In the beginning, certain game descriptions teased that Kusanali takes the form of a young girl. Then we find out in chapter three, act two that Nahida is in fact the Dendro Archon, but not entirely. What it means is that the Nahida you see before you is a manifestation of Kusanali, whose physical body is kept within the Sanctuary of Surasthana.

This means that the Nahida the Traveler sees in Sumeru is just a projection of Kusanali herself. The immense power that she displayed soon after her birth, during the cataclysm 500 years ago led her to be kept in the Sanctuary, never interacting with the outside world, at least physically.

Yaoyao is a friend of Qiqi’s and is a rumored Dendro character primed to make her appearance in a future update. While she was supposed to be released in a previous update, with leaks suggesting that she was part of the 2.4 update with the Chasm. That release was later scrapped in favor of other characters and her new release date is yet unknown.

As such we know next to nothing about Yaoyao so far. All we know is that she is a Dendro wielder, without any idea of what her weapon will be. Her rarity is also unknown, but it is likely she will be added to an upcoming banner fairly soon.