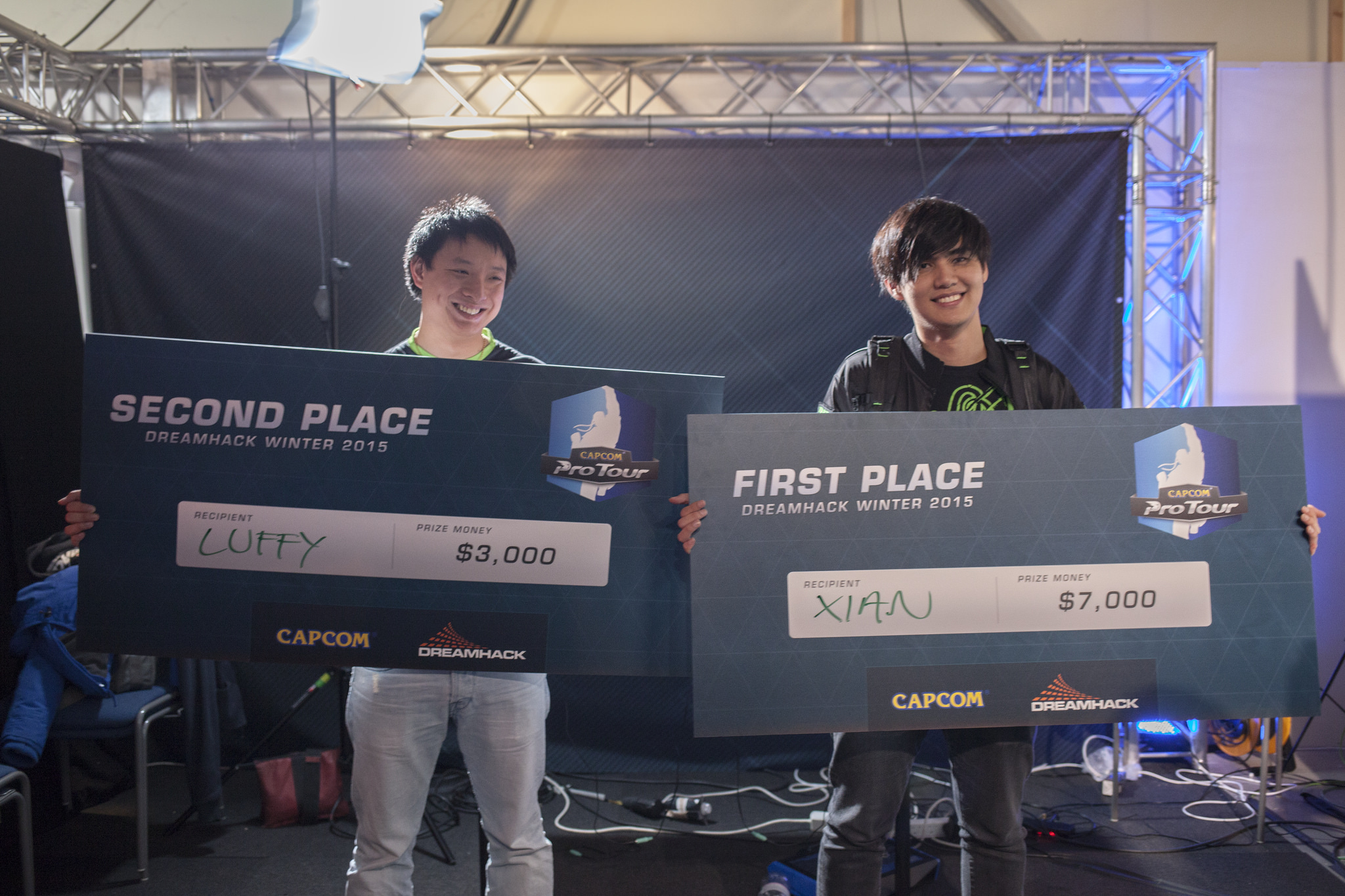 Xian took title at DreamHack Winter in Sweden on Saturday, the final Premier event of this year’s season ahead of the Capcom Cup. That tournament, where the title of Street Fighter World Champion and a share of $250,000 will up for grabs, takes place in San Francisco this weekend.

Xian capped his impressive run in Sweden with a dominant 3-0 victory over Meltdown’s Oliver “Luffy” Hay in the grand finals. His performance sees him going into Capcom Cup as a strong favorite—not only is he the only player to have won three Premier events, but he is one of only three players to win four events on this year’s tour.

Frenchman Hay earned an automatic qualification into this weekend’s event in San Francisco, as he was the highest-placing player who had not earned a spot through a Premier event. Since Hay was already assured a spot at Capcom Cup, however, this allowed one more player to qualify via points—China’s Haojun “Dakou” Su of Qanba/DouyuTV became the final player set to compete at Capcom Cup.

Su’s qualification was far from a sure thing, even in the tournament’s final stages. Arman “Phenom” Hanjani of Norway came the closest to ending Su’s season. Hanjani picked up victories over teammate Vegard “Veggey” Kopangen Bugge, the U.K.’s Ryan Hart, and DC “Infexious” Coleman to set up his match against Xian in the winners’ finals.

Hanjani fell to Xian in a match that came down to the last round of the last game. Had Hanjani won that set, the only way he would have failed to qualify for Capcom Cup was if Hay defeated Xian in the loser’s finals, and then beat Hanjani twice in the grand finals. Instead, Hanjani had to win a do-or-die set to earn a trip to San Francisco. The moment seemed too big for the Norwegian player, as Hanjani took needless risks and made uncharacteristic mistakes on his way to a 3-0 defeat at Hay’s hands.

The energy in the audience seemed to fade during the final few matches. Most of the spectators had hoped to see Hanjani qualify for the Capcom Cup. Hanjani held a 2-1 lead over Xian, at which point Xian switched from Gen to Elena, a character who has become widely-reviled among fans due to her playstyle and her healing ultra combo. Xian’s switch to Elena was a surprise. He’d saidhe was going to stick with Gen.

“I’m not gonna pick Elena,” he said in an interview shortly before his match with M. Bison specialist Hanjani, “because I want to win with Gen this time. I know the matchup [versus Bison] better with Gen, and there’s no point for me to pick Elena.”

While Hanjani put up a great fight, he could not find a way to overcome Xian’s Elena. The fans never got another chance to really get into the event, as the final two, Hanjani versus Hay and Hay versus Xian, were relatively-uncompetitive 3-0 affairs.

After the tourney, Xian explained that his runner-up finish at Milan Games Week helped fuel his change of heart.

The tournament not only marked the end of the Capcom Pro Tour ‘regular season’ but the end of many players’ dreams of qualifying for the Capcom Cup. Ryan Hart, who tied for fifth at last year’s edition, will be merely a spectator after his ninth-place finish this weekend. Fellow Brits Coleman and Ramz Shaft “RMZ” Kiggundu Luswa, both of whom finished fifth this weekend, will also watch from the sidelines. The two Japanese players who made the journey to Sweden, Yoshihisa “Gonzales” Hirata who also placed ninth, and 13th-place Reiketsu Hidou, also fell short of San Francisco.

With all 32 Capcom Cup entrants locked in, players can now focus solely on their paths to victory at next weekend’s season finale and the $125,000 that the winner will take home. Should Capcom handle seeding as they did in 2014, Xian will square off against Valentin “Valmaster” Petit, who withdrew from the DreamHack event due to illness. Under that same scenario, Hay will face fellow European Benjamin “Problem X” Simon in the first round, while Su, who qualified as the 31st seed, will begin his tournament against Seonwoo “Infiltration” Lee.