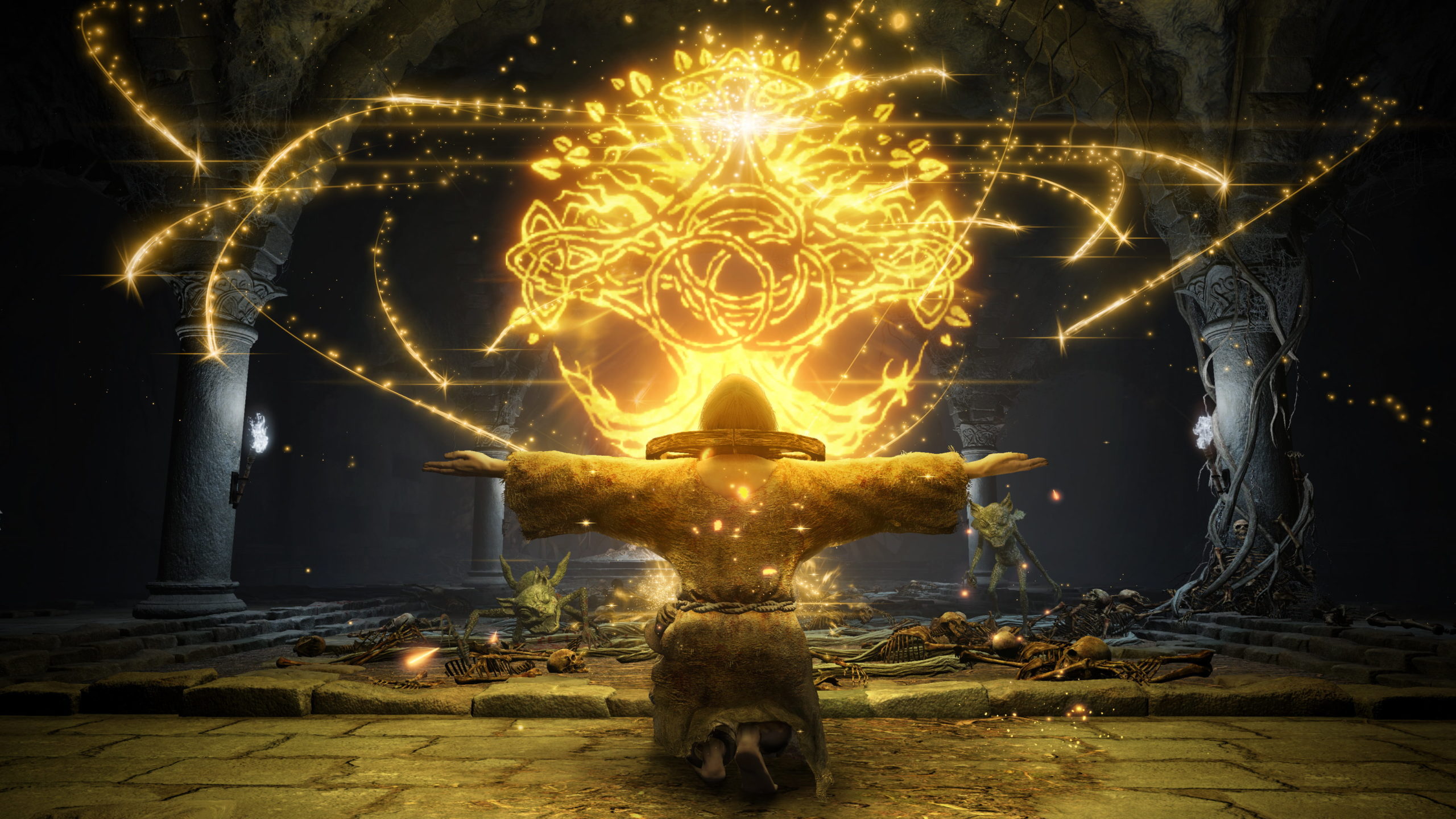 Elden Ring is FromSoftware’s most ambitious title to date. The Lands Between are filled to the brim with content for players and Tarnished alike to engage with for hours on end. Exploration, domination, and even at times relaxation are some of the things players can expect to do when delving into this massive game.

With the wide breadth of content, weapons, armor, and spells available to players, many are wondering what the best options are for all scenarios in the game. One category, in particular, is incantations, the spells associated with miracles in previous Fromsoftware titles, and the Faith attribute.

Here, we’ll make a tier list that all aspiring Elden Lords, Frenzied-Flame enablers, and others can use as a guide while progressing through the Lands Between.

Incantations in Elden Ring are Faith-based spells similar to Miracles in previous FromSoftware titles. These spells have a base damage, but rely heavily on the player’s Faith level and Seal used.

In Elden Ring, there are over 100 Incantations for players to use.

The following tier list will narrow it down to the top 20 Incantations and rank the Elden Ring spells from there based on utility, damage, and more.

When it comes to utility and overall usefulness, not many Incantations come close to Golden Vow. Tarnished who invest 25 levels into Faith will be able to use this Incantation and receive a 15-percent buff to all attacks—physical, magic, and more—and 10-percent damage negation for 80-seconds.

Flame, Grant Me Strength is the only other utility Incantation that comes close to Golden Vow. While it is not as all-encompassing, it does provide a 20 percent physical and fire attack damage buff. This is a Body Buff, meaning players can stack it with Golden Vow to get even more increased damage.

One of the single-most damaging Incantations in the game is Giantsflame Take Thee and it only requires 30 Faith to use. This Incantation will be Faith-player’s bread and butter when it comes to tackling bosses around the Lands Between.

The Incantation gets even stronger when paired with two Giant’s Seals to boost the power of various flame-based Incantations by 44 percent.

Here’s more information on how to get stronger pyromancies in Elden Ring.

One of the fastest Incantations available in the game is Bestial Sling. Players can receive this by giving Deathroots to Gurranq in the Bestial Sanctum in Caelid. Using this Incantation sends out a fast cone of piercing rocks that can be chain-casted together for rapid damage output.

It’s at the top of this list due to its speed and chain-casting abilities combined with the mobility it allows players to have. Quickly throwing stones and rolling around the battlefield makes quick work of any foe in the Tarnished’s way.

This Incantation and build found its way onto our ‘Best builds to use in Elden Ring‘ article for a reason. Ancient Dragons’ Lightning Strike is one of the strongest, but also most unpredictable, incantations in the game. It truly has the ability to one-shot end-game bosses but can be a little finicky—which is why its at the bottom of S Tier.

However, if this does land in full, it’s no wonder why it’s at the top of the list.

Many may wonder why Catch Flame is in A-tier instead of O, Flame!, but it all comes down to cast time and damage per second. With the ability to pair this incredibly fast and close-quarters Incantation with fire-boosting armaments and Flame, Grant Me Strength, Catch Flame users can shred through enemy health bars. Compared to Bestial Sling, Catch Flame does more damage per second. But it requires enemies to be in the Tarnished’s face and lacks the range of Bestial Sling.

Better yet, it comes as a starting Incantation for the Prophet class. So players can use it off rip.

From the Servants of Rot, we’ve got Pest Threads Incantations. This is one of the most frustrating Incantations to go against due to the homing nature of the projectiles. However, in the hands of the Tarnished, it can be just as deadly to enemies all around the Lands Between.

The only downside is it is obtainable fairly late in the Millicent questline through Gowry and his wares. But for 19 FP and only an 11 Faith investment, this deadly-homing Incantation is worth the investment.

In the PvP community, this Incantation is a staple. Many players keep Honed Bolt in their back pocket to finish off other duelists as it is very spammable with its quick cast time and low FP cost. It can also be very useful in PvE scenarios for the same reasons. A fast-to-cast lightning attack that spawns underneath the target can come in handy in a pinch to get that last little bit of damage off to finish the fight.

It’s no question Blood Loss and the Bleed status effect are very strong in Elden Ring. Swarm of Flies takes advantage of that and near-combines with Pest Threads to create a homing, blood-loss-building Incantation to rip through the foe’s health pool.

Even though the damage was nerfed back in Patch 1.04, these bugs are still incredibly strong. Those looking for Swarm of Flies can check out our guide here: Where to find the Swarm of Flies incantation in Elden Ring.

An undervalued Incantation is Black Flame. Players will throw a ball of Black Flame at their foe which does decent base damage, but also continues to drain the target’s health for a brief time. This Incantation, like Bleed, is very effective against enemies with large health pools.

Bestial Claw is a strong cone-AOE Incantation that can rip through mobs of enemies and bosses alike. Like other Incantations, it can be boosted by the specific Sacred Seal players are using—Clawmark Seal in this case.

Additionally, this Incantation deals physical damage which means it can further be boosted by Flame, Grant Me Strength, and Golden Vow.

O, Flame! is the upgraded version of Catch Flame, however, it is not considered as strong. This is due to the longer cast time for O, Flame! which limits its potential damage per second by comparison. It does, however, have a larger AOE compared to Catch Flame which can be very advantageous and it can be chain casted.

Considered the strongest of the Dragon Breath Incantations is Ekzyke’s Decay. This dragon’s breath has a strong base damage upon hitting its target, but it’s the Scarlet Rot buildup that allows it to truly shine. Players can quickly status the enemy they’re fighting and switch to another Incantation with a higher damage output to combo with Scarlet Rot.

The only weapon buff found on this list is Blood Flame Blade.

Using this Incantation imbues the player’s weapon with Flames that also cause Hemorrhaging. Weapons that excel and combo well with Bloodflame Blade are ones that inflict Blood Loss like the Uchigatana or Bloodhound’s Fang.

Frenzied Flame Incantations are powerful, but underpowered at the same time as the madness buildup does not affect bosses or non-invader enemies. However, they deal a very strong amount of damage on their own even if Madness buildup is not possible.

Unendurable Frenzy throws a massive amount of Madness flame in front of the player. Players can also walk in any direction while casting, and hold the cast down to continue casting.

The sniper Incantation of Elden Ring—Frenzied Burst. This Incantation can do a very large amount of damage on its own from a distance, which makes it very useful against all foes. It is also chargeable, meaning players can boost the damage by 15 percent using Godfrey’s Icon.

The cheese Incantation makes the top list of Incantations in Elden Ring. While it used to be used to combo with the Eclipse Shotel to cause Deathblight, it has since been nerfed. The Incantation is typically used in Frostbite builds to cancel the Frostbite debuff with the passive fire damage. This resets Frostbite buildup and allows players to proc it over and over again.

One of the most challenging Dragon Incantations to dodge is Placidusax’s Ruin. It deals a lot of damage and provides a lot of ticks of damage throughout the attack. Its dodge difficulty makes it also viable in PvP and is why it made the list.

Many don’t know the Howl of Shabriri provides a 25-percent damage buff stackable with Golden Vow. While it does increase damage taken and causes self-Madness buildup, it also damages those around the caster and causes area of effect Madness to build up. Players can utilize this Incantation for massive damage output through other avenues when stacked with other buffs

An underrated Bestial Incantation is Stone of Gurranq. This rock throw deals a lot of poise/stagger damage and can be chain-casted. Additionally, it can also be buffed by the Clawmark Seal for even more damage output and can be throw from a distance while player’s Spirit Summons are sent to the frontlines.

These are the top 20 Incantations in Elden Ring, and are the most useful for players across the board. FromSoftware made Faith builds fun compared to the Dark Souls counterparts as there are a ton of Incantations to choose from.