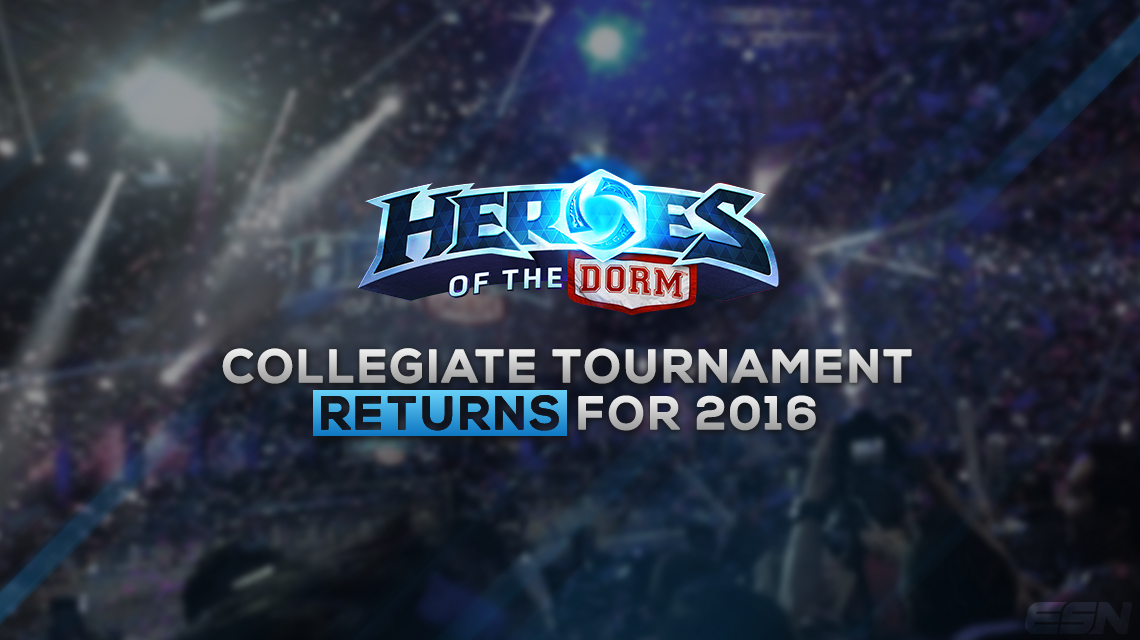 Blizzard Entertainment’s Heroes of the Storm collegiate-based tournament, Heroes of the Dorm, will be returning this year to ESPN with a shared prize pool of over $500,000.

Last year’s inaugural event was the first-ever collegiate eSports tournament that was aired on ESPN2. Over 460 teams had the opportunity to compete for the championship title, along with the grand prize: tuition money towards their college career. https://twitter.com/BlizzHeroes/status/692740941300396033 This year’s TeSPA-run event will kickoff with a three-week double-elimination online qualifier that will start from Feb. 20 to March 6. Registration for the qualifier is currently open until Monday, Feb. 18. The top-64 teams will then move on to an online single-elimination bracket. Starting on March 19, rounds from bracket play will be broadcasted live on ESPN’s online streaming platform, ESPN3, Twitch.tv, and YouTube Gaming. The final four teams from bracket play will move on to to play at a final two-day event, starting with the semifinals, “The Heroic Four,” on April 9, and the grand finals on April 10. Both of these final stages will be aired live on ESPN2, similar to last year’s final matchup between eventual champions UC Berkeley and runners-up Arizona State University. The finalists will be playing for the first-place prize of $375,000 in scholarship money. https://www.youtube.com/watch?v=8PPixgd4WM4 Blizzard Entertainment CEO and Co-Founder Mike Morhaime is excited for this year’s Heroes of the Storm collegiate event, stating that, “Last year’s Heroes of the Dorm was an amazing experience for the students playing and everyone watching, and we’re excited to again offer college athletes an epic opportunity to team up and compete for scholarships in 2016.” All participating players will receive various prizes depending on their final placement. The prizes are as follows: Championship Prize Top 4 Teams Top 128 Teams Additionally, prizes will be available for fans this year with the Heroes of the Dorm bracket challenge – a bracket creator that awards $10,000 to the most accurate bracket. Will you be watching Heroes of the Dorm on ESPN? Let us know. Follow our Twitter – @eSportsNation for more Heroes of the Dorm coverage and content.