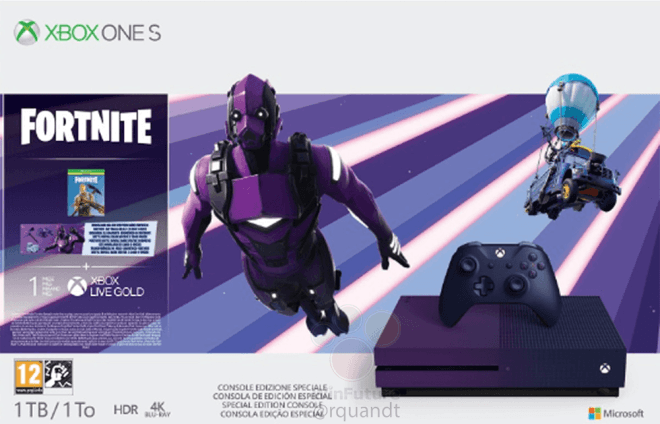 Microsoft is reportedly partnering with Epic Games to release a new Xbox One S Fortnite bundle.

A promotional image shows a purple Xbox that would come with Fortnite pre-installed, and players who bought it would get an exclusive purple variant of the Vertex skin, a pickaxe, a glider, and V-Bucks. The image was revealed by German website WinFuture. The controller also seems to have a small crosshair like the one in the game between the action buttons on the right.

Players would also get one month of Xbox Live Gold, which allows them to play Fortnite online.

There’s no evidence that this Xbox One S bundle is legit, though. Both Microsoft and Epic have yet to confirm and reveal it. The only collaboration between the two in the console department is a standard Xbox One S that also comes with Fortnite and a special Legendary Eon cosmetics set, which includes a skin, a glider, a pickaxe, and 2,000 V-Bucks. It’s been available since September 2018.

This new promotion would be limited, according to the report. This new Xbox model would be the same as the others with 1TB, except for its purple color scheme. No piece of hardware should be upgraded in comparison with other models.

That also means issues with poor console performance that several Xbox players have been complaining about for months would probably happen in this edition. Players complain that the game takes too long to render certain areas of the map, causing early game crashes, glitches, and bugs that they can only solve by quitting the match.

The Vertex skin model that reportedly comes with this bundle is already in Fortnite, but in its orange variant. Epic released it in season four to match the superhero theme, and players saw it in the Item Shop rotation for the last time in September 2018. The purple variant shown in this promotional image is new.

Dot Esports has reached out to Epic Games for clarification about the bundle.