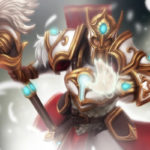 Dota 2 is a free-to-play game, with Valve generating millions in revenue through the Steam store—the market is so big it can probably keep the game alive even without any additional income.

Valve’s flagship title relies on skins and other cosmetics products to generate the majority of its revenue. Despite starting with subtle skins, the developers started introducing skins with more effects and unorthodox concepts to the game. Some skins change the look of a hero’s spells, while others can even alter a hero’s voice.

Considering Dota 2 has been around since 2013, the number skins available in the game is relatively high, which makes choosing the best of them a challenging task.

Omniknight can be considered a guardian angel. A healing spell in your most dire moment can change the course of a fight, allowing you to live to fight another day.

The Sacred Light skin set portrays Omniknight as the guardian angel with an ambient effect on his head. The set itself features a white color scheme and adds the finishing touches with a red cape.

Pudge — Chains of the Black Death

Pudge is one of the most popular heroes in Dota 2’s history. Hooking enemies to yourself as Pudge can be quite satisfying, especially when you’re doing it in style. Given Pudge’s popularity, you’ll be looking at a large catalog when it comes to choosing a skin set for Pudge. The Chains of the Black Death skin is a classic, first introduced to the game in 2014.

Back during its release, Pudge was rarely picked in the competitive scene, but players would have this skin equipped when they were picked.

Sniper — Tales of the Ardalan Interdictor

If you’re looking to keep your death count low, you’ll need to work on your distance from the enemy heroes. Diving right into action may not always be the right call since there will always be an enemy hero waiting for you to make a mistake. You should double your attention, especially while playing heroes like Sniper who lack mobility.

Sniper makes up for his lack of mobility with his huge attack range. If you’re playing Sniper right, the enemy heroes should have a hard time while trying to get you. This also means they’ll have more time to stare at your awesome cosmetics.

Tales of the Ardalan Interdictor takes the crown as one of the best skins available for Sniper, mostly due to its new animations. The immortal set comes with spawn, running, attack, and ability animations, which makes Sniper even more fun.

Phantom Assassin generally shines at the later portions of a match. This means you’ll have plenty of time admiring the level of detail in Manifold Paradox until you farm all the items in your build.

Manifold Paradox is an Arcana item that changes the Assassin’s look drastically. From new animations to weapons, she almost becomes a completely different hero. Not only does the Manifold Paradox look stunning, but it also makes playing Phantom Assassin a more satisfying experience. The critical hits will feel more impactful, and you’ll also be leaving a Paradox Memorial on the ground every time you take out an enemy.

Invoke — Acolyte of the Lost Arts

All the heroes in Dota 2 look like they have everything figured out. One can’t help but think what they’d be like when they were kids. The Acolyte of the Lost Arts Persona answers that question perfectly, bringing the kid Invoker into Dota 2.

This skin changes Invoker from head to toe and introduces new animations. The Persona’s voice acting helps players bond with the kid Invoker as well while he tries his best to figure out the limits of his power in a Dota 2 match.