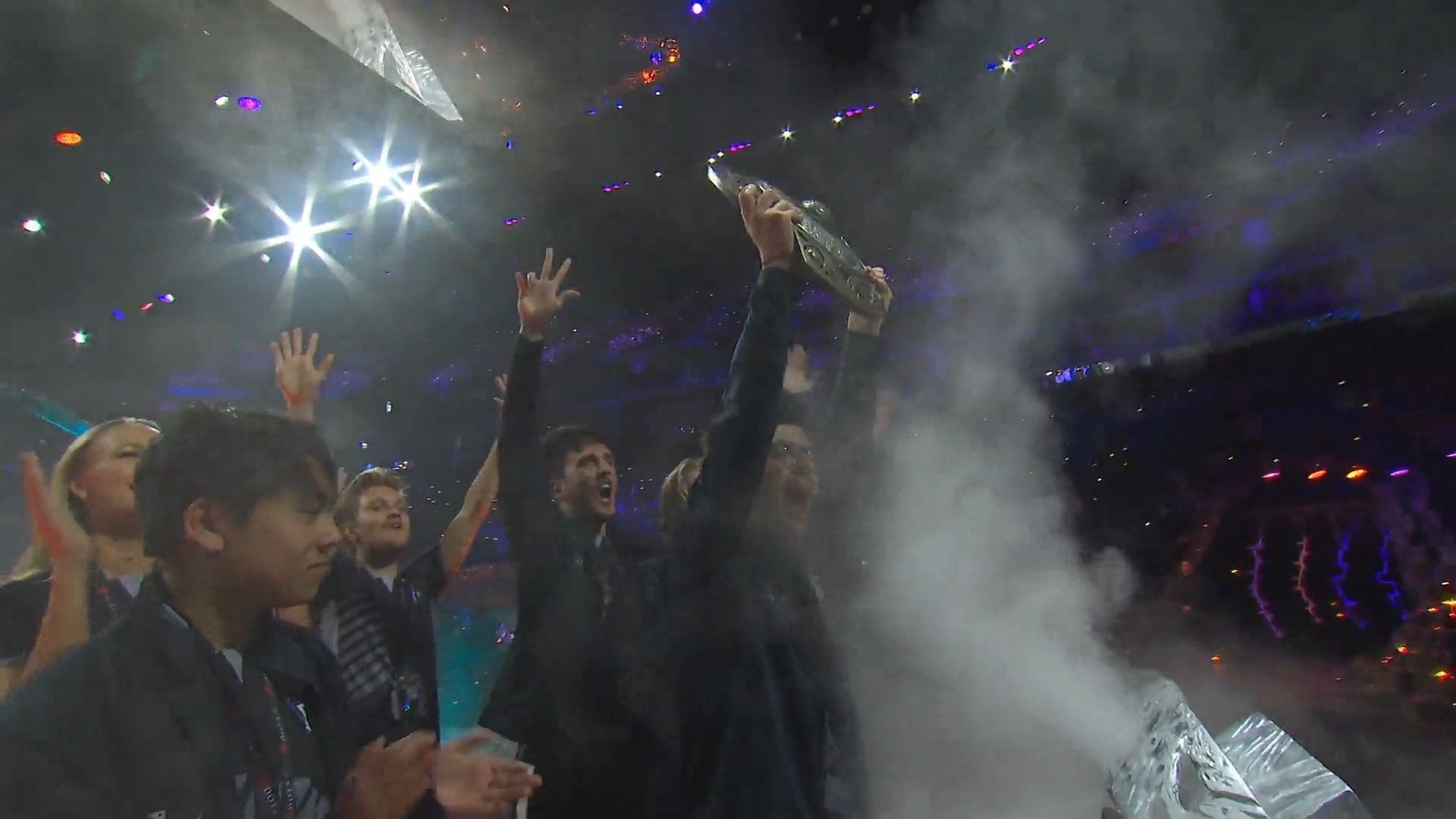 For the first time in history, a team has won two Internationals, but OG made it even better by winning them back to back as they hoisted the Aegis of Champions once more at The International 2019.

After placing the trophy down in the opening ceremony, OG dominated Team Liquid in three straight games to claim a 3-1 victory in Shanghai.

Game one was an interesting draft, seeing Liquid grab a Meepo for Aliwi “w33” Omar and Templar Assassin for Amer “Miracle-” Al-Barkawi. Along with picking up one of Kuro “KuroKy” Takhasomi’s best characters in Chen, Liquid looked really good, if a little strange.

OG got a few comfort picks, continuing their use of Tiny on Topias “Topson” Taavitsainen and nabbing Sébastien “Ceb” Debs an Enchantress, but their main focus was getting Anathan “ana” Pham built up on Spectre.

It was a close early game, with Liquid taking a small lead as w33 started securing kills with Meepo. That small lead quickly spiraled out of OG’s control the longer ana spent farming and allowed the quick pace of Liquid to overwhelm the rest of his team.

By 20 minutes, Liquid was up more than 6,000 gold and had a large kill advantage as they pressured OG into some bad situations. But one of those situations quickly turned around for them as Liquid pushed the high grounds, taking a set of barracks.

OG committed to a hard hold, diving in, killing Miracle and then chasing down the remainder of Liquid to team wipe and bring a nearly 19,000 gold lead back down. A few more kills in lanes led to OG getting their own push into Liquid’s territory as the gold lead was back to even and ana looked unkillable.

Unfortunately for OG, Liquid were able to focus down ana and secure the last kill they needed to force their way back to OG’s base. Several missed executions and ana failing to buyback in time for a defense led to another quick turnaround, ending the roller coaster of a first game with Liquid on top.

Knowing they needed to play a different style, OG picked up an early Grimstroke and Omniknight combo, finishing up with a crowd-pleasing Monkey King, Topson’s signature hero. Liquid went with TA and Tidehunter again, trying to reshuffle their cards into a similar strategy.

Topson took on w33’s TA in the midlane, showing why he is so dominant on the hero. He heavily controlled the middle of the map as the remainder of OG ensured w33 couldn’t freely farm in the jungle.

There was never a time that Liquid felt in control, OG just looked unstoppable as they completely ignored the map objectives, diving into battles no matter where they had to engage. Liquid couldn’t safely move around the map as OG jumped into tier three towers to secure kills before even wiping the tier one area.

OG stuck together for a large portion of the game, and 20 minutes in they were still chasing down Liquid after every mistake, never letting up on their assault and securing a near team wipe. That launched OG into a high grounds push that put Liquid on the edge.

There would be no saving grace this time as Topson went on a rampage and OG piled on the kills, ending the game 40-11 as Liquid called GGs.

Game three looked better for Liquid, but it actually ended worse. With Ceb on Enchantress and Topson on Pugna, things quickly got out of hand yet again. MinD_ContRoL was completely shut down for the second straight game, as OG relentlessly chased him down.

The sheer control that OG had over the map with Tiny being able to toss back and Grimstroke slowing down enemies was insane. Coupled with Faceless Void’s Chronospheres, Liquid didn’t stand a chance.

GGs were called within 23 minutes as OG put themselves one win away from defending their title.

Liquid finally abandoned their Tidehunter and TA core picks, instead opting for a Chen and Omniknight line to keep Miracle’s Bristleback healthy. But because OG were playing so many heroes well, they banned Invoker and Elder Titan, leaving ana his TI9 minted carry Io.

A core made up of The Wisp, Topson’s Gyrocopter, and a very situational Ceb Timbersaw was dangerous, but the early game had Liquid looking stronger than they had in the previous games. They weren’t being dived under the tower and were able to force Johan “N0tail” Sundstein’s Abbadon back even with Io’s help.

But Liquid couldn’t keep things going, as their lead evened out and ana managed to secure his Aghanim’s Scepter. Liquid extended into a high ground fight, but Topson sapped all of Miracle’s mana as the fight heated up, making him a non-factor despite having an Aegis from Roshan.

Another team wipe on Liquid completely flipped the match in OG’s favor as they quickly took barracks and forced Liquid to concede despite their strong start. The Ancient fell and OG started celebrating.

For the first time in the history of Dota 2, a team repeated as champions as OG defended their TI8 win, claiming a second Aegis of Champions at The International 2019.

As the team celebrated, N0tail pushed Ceb forward to hoist the trophy, cementing their place as the most dominant team in the history of the game. Anathan “ana” Pham, Topias “Topson” Taavitsainen, Sébastien “Ceb” Debs, Jesse “JerAx” Vainikka, and Johan “N0tail” Sundstein will have their names written on the back of the Aegis once more.

Liquid bow out after an incredible 11-1 run through the lower bracket to make it to the finals, with KuroKy having played the most games in history at The International with 204 total.

The International 2020 will be held in Stockholm, Sweden, where OG will try to defend their titles once more, gunning for a threepeat like no one has seen before.