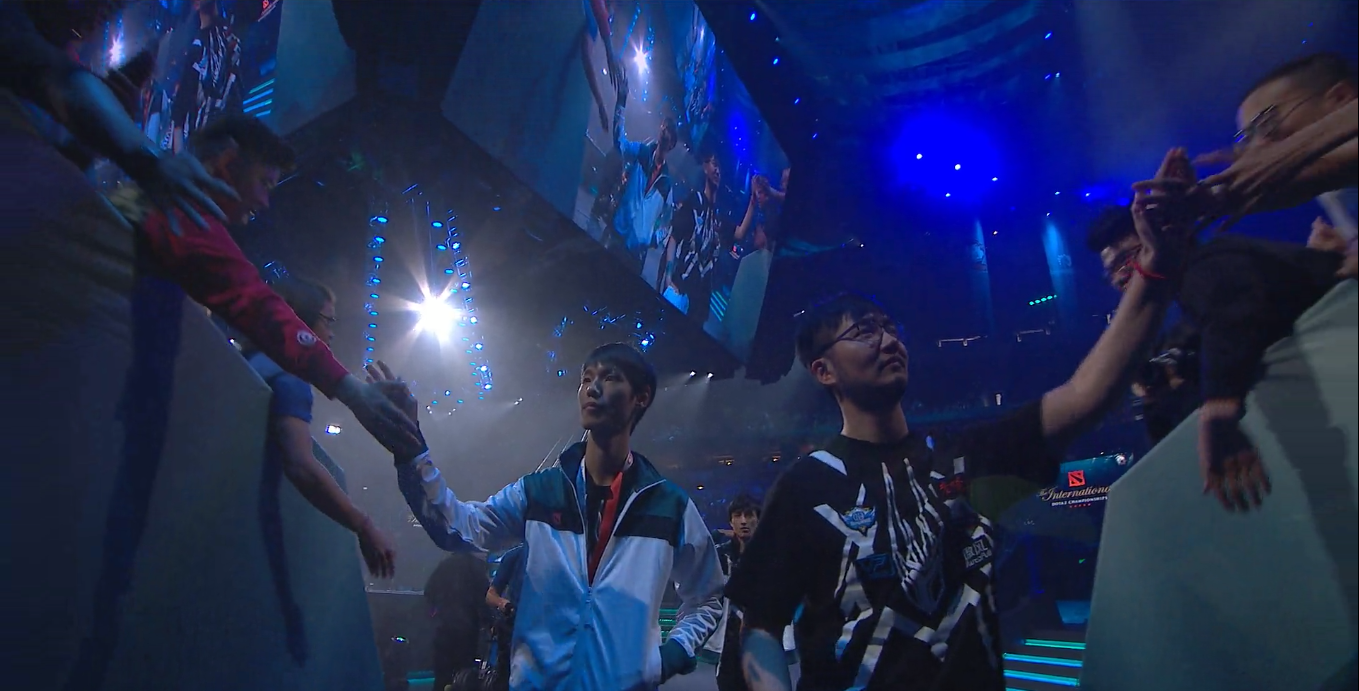 One of the most successful Dota 2 teams of recent years has been ejected from The International 7.

In two straight games, European favorites OG were unable to withstand China’s LGD—which now means that more than half of the remaining teams at the event are Chinese.

The first game of the series saw LGD establish an early lead, as the Chinese team took down OG’s midlaner Anathan “ana” Pham’s Ember Spirit three times prior to the five-minute mark.

LGD proceeded to secure several pick offs across the map. The European team was still eager to fight, despite the rough early-game situation, and both teams traded kills whenever they clashed. OG were, however, able to secure map control after picking off three straggling LGD heroes within a short time span. Support player Jesse “JerAx” Vainikka in particular shone at this point in the game on his Rubick, setting up team fights and catching players with stolen Fissures.

While the game did go back-and-forth for roughly 30 minutes, LGD began picking up a ton of momentum, and proceeded to rampage across the map. Due to the lack of physical damage on OG’s line-up, Lu “Maybe” Yao’s farmed Leshrac completely dismantled OG in large engagements, and after securing a number of kills—LGD began knocking on the base of OG. Grabbing the Aegis prior to their first attempt at breaking OG’s base, LGD were successful in bringing down the European super squad’s mid set of barracks, at the expense of four deaths.

An incredible team fight from OG following their defense brought down three LGD players, and forced almost instant buy backs out of Chen “Victoria” Guanhong and Ren “eLeVeN” Yangwei. But almost instantly after the play, LGD charged back into OG and brought down the team’s three cores—effectively erasing all of the ground gained by the Europeans.

LGD proceeded to push the bottom lane of OG, but the team mounts a successful, but incredibly expensive defense.

Both teams enjoyed a brief respite following the engagement, but after stalling OG from entering the Roshan pit, LGD were able to claim the Aegis and proceeded to kill the cores of the European team—which allowed them to push their way to victory in game one.

In contrast to the first game, OG were the ones who got off to an incredible start, as the European team dismantled and brought down five LGD players incredibly early into the game. With a poor start, LGD took their time and slowly began evening out the amount of kills.

The first massive engagement in the game came after both teams began posturing around the Roshan pit, which eventually resulted in an all-out brawl. Both Maybe and Wang “Ame” Chunyu were confident enough to jump into Roshan’s lair, and allowed Victoria’s Kunkka to get off a perfect ultimate, which demolished the entire OG line-up.

With a massive gold and experience lead, LGD exerted complete control of the map and proceeded to pick off multiple OG players. The European favorites were able to put up some resistance against the Chinese juggernaut, but were still falling further and further behind.

Despite OG’s best efforts, Maybe’s Storm Spirit was almost unkillable, which in conjunction with Ame’s super-farmed Sven lead to the European squad being forced to tap out—forcing them to exit The International without a top four finish for a second consecutive year.