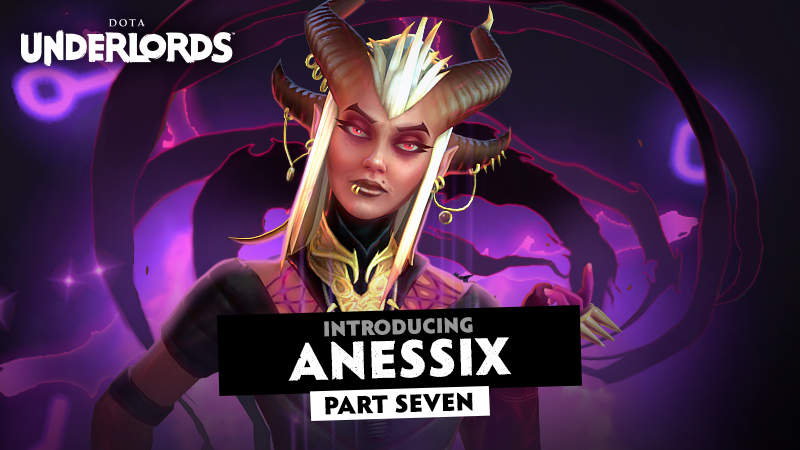 Valve released the seventh and final preview for Dota Underlords’ The Big Update last night, introducing the second Underlord, Anessix, to complete the lineup for the upcoming patch. The developer will push out the update as soon as it “get the green light on all platforms.”

Underlords serve as the primary unit on the board. Each comes equipped with a full array of skills and talents, which allows players to tweak and fine-tune their Underlord on the fly.

Underlords use a unique resource named Hype. Unlike heroes in the game, the crime bosses don’t consume Hype when they use abilities. Instead, they need the level of Hype to be equal to or greater than the cost of the ability to activate. There will be items, abilities, and status effects that cause Hype to drop.

Anessix comes equipped with her own demons, summoning them into battle to fight by her side. In contrast to Hobgen’s more offensive kit, the Mistress of Secrets revolves more around control and healing.

Anessix’s passive causes her to generate Hype for each allied Demon on the board. It’s unclear if Anessix herself is considered a Demon on the board, however. Detailed patch notes will likely be released following the launch of the game’s update.

The benevolent Mistress possesses Matyr’s Boon, a skill that allows her to use her own health pool and heal allies. Pure Pain causes Anessix to target a foe and deal continuous pure damage for a short period.

Anessix will have her own pool of talents to choose from that’s focused on buffing and debuffing units at her own leisure. If matches aren’t already busy enough with unit management, there’s going to be more on the player’s plate with the new Underlords in play.

Unlike Hobegen, the demonic Mistress specifically indicates an Alliance in her skills. This could force a more rigid way of playing Underlords, with players feeling pressured to go for a specific Alliance to buff up their Underlords. There’s a beauty in having to adapt and grow accordingly to your luck of the draw, and the new Underlords system might undermine that once The Big Update goes live.