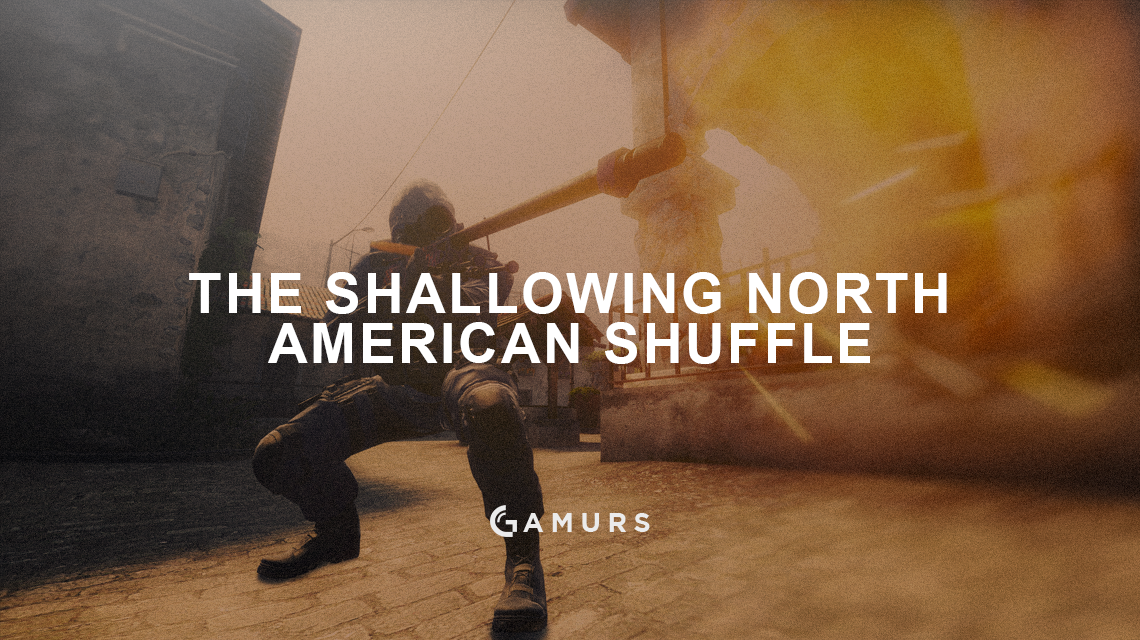 Talent is not consolidating amongst the top North American teams. Since the conclusion of the last Valve major, ESL One Cologne 2016, many North American teams have reconfigured in the buildup to ESL Pro League Season 4. Unfortunately, instead of improving rosters, the steps taken by a majority of top teams look more harmful than helpful. Out of the team’s ranked top five in my post Cologne rankings, four have made apparent downgrades, though the exception, OpTic Gaming, did make a seemingly advantageous move by trading out an underperforming Peter “stanislaw” Jarguz for Counter Logic Gaming’s former star Tarik “tarik” Celik.

Of course, not everything can be laid at the feet of the organizations involved. Two key factors have hindered an these top team’s ability to improve: Valve’s new ruling which radically curbs a coach’s ability to function as an in-game leader, which will negatively affect all teams, but will be especially harmful to Liquid and Cloud9.

For a split-second in July, Liquid became the first North American team to ever appear in a Major tournament, even if their standout player was the Ukrainian Oleksandr “s1mple” Kostyliev. Over the course of ESL One Cologne, s1mple individually averaged an HLTV rating of 1.12, putting up 24 kills or more in five out of 11 maps and dominating some of the best teams and players in the world. But even the record breaking second place finish couldn’t convince their talented but troubled star to stay in North America.

No national replacement could have filled the shoes of s1mple, and only a handful of players in the world can match or surpass him in skill.  His Danish replacement, Jacob “Pimp” Winneche, is no slouch, as he has shown an elite level of play in the past even on the international level, but he too comes up short. In his most recent LAN appearance at ELEAGUE, Pimp averaged an HLTV rating of 1.08, which is inflated comparatively as he played some relatively weaker teams in NRG and CLG.

Looking back at his numbers at the peak of his powers, Pimp had some tournament runs where he matched the effectiveness of S1mple, but unlike him, Pimp’s teams rarely made sustained tournament runs, which meant Pimp’s numbers were again inflated by weaker group stage opponents. On the other hand, Pimp does nicely fill in for s1mple in terms of roles as he, like s1mple, can function as a hybrid rifle/AWP player, though to be fair, Pimp’s proficiency with the AWP has never quite matched up to his peak-form rifle play.

The greater detractor for Liquid will come from rule changes rather than roster changes. On May 17, just nine days before their disastrous ELEAGUE appearance, former Tempo Storm coach Luis “peacemaker” Tadeuwas was brought in to both coach and in-game lead for Team Liquid. After their embarrassing 0-8 showing, Liquid picked up JDM and re-added S1mple, which certainly helped Liquid at ECS and ESL One Cologne, but many have highly credited peacemaker for their two improved appearances at the ECS finals and ESL One Cologne.

Before Peacemaker was brought in, leadership responsibilities were frequently passed back and forth between Eric “adreN” Hoag, Spencer “Hiko” Martin, and their previous coach James “GBJame^s” O’ Connor. Peacemaker’s presence has slowly given Liquid a better tactical coherency and freed up their highly talented players to focus on their own in-game performances. With Valve’s new coaching rules in place, peacemaker’s role will be reduced and Hiko will most likely again take up additional responsibilities in order to compensate, which could significantly hamper Liquid moving forward.

For the most part, the explosive play of their young players in Hunter “SicK” Mims  and Russel “Twistzz” Van Dulken has the distinguishing feature of the often over performing TSM. But looking at their T-side play, outside of the quick rush changeup, TSM almost always stick to 4-1, and Timothy “Autimatic” Ta always has functioned as this dedicated periphery player. As this outside man, he has to hold rotates or sell fakes on the other side of the map. which are often crucial to the overall success of the round. Outside of Hiko, there is perhaps no other North American player who is as entrenched in the lurk role as Autimatic.

While Autimatic has not been as effective as Sick on LAN or Twistzz online, his contributions might may have gone a bit under noticed during TSM’s string of LAN appearances earlier this summer. At ELEAGUE, where Cadian had to be brought in to replace an underage Twistzz, Autimatic actually was TSM’s best performing player statistically as the rest of the team struggled. At TSM’s other two LANs, Autimatic displayed a consistent respectable output, which cemented his reputation as a good player in the context of NA and an average player internationally.

On the other hand, Autimatic’s temporary replacement in Justin “Just9n” Ortiz has a reputation largely built on two small data points: a widely distributed argument with Dazed on stream, and a surprisingly strong individual performance on Mirage versus EnVyUS in their upset win against them in the first round of the Counter Pit Season 2 LAN. The Dazed video probably best captures Just9n’s reputation before the start of his tenure with NRG.

Before his 2016 pickup, amongst his peers, he was widely seen as a sub-average player who had been widely unsuccessful in his semi-professional play. In contrast, his performance versus EnVyUs captures the turnover point where his individual performance online stabilized at a surprisingly strong level, though like Autimatic, good but not spectacular at home. During Just9n’s tenure with NRG, he was the team’s best rifler and second best player behind their AWPer Peter “ptr” Gurney.

The problem for TSM is that he never functioned as a lurk player during his time with NRG and played bigger site positions on CT, unlike Autimatic, who tends to play solo or with limited help on smaller sites. Given this lopsided replacement, it seems that TSM will likely have to dramatically reconfigure themselves on CT while also putting one of their players in a less familiar lurk role on T. Perhaps Pujan “FNS” Mehta would be more suitable to take up that position than Just9n, given FNS’s previous time at that position during his latter days on CLG.

Looking forward beyond the immediate future, TSM did state in their announcement post that announced the roster move that Just9n would only function as a placeholder until a more suitable replacement could be found. With most rosters now locked following the start of ESL Pro League on both sides of the Atlantic, it seems unlikely that their scouting will be especially fruitful.

Since the departure of Sgares, Cloud9 have been fairly underwhelming, but they started to the occasional strong  result such as their performance in the first week of ELEAGUE group play where they went toe-to-toe with the world’s best, Luminosity. Despite struggling in the fragging department, Cloud9 has looked far more dangerous on the T-side thanks to his play calling. At the MLG Columbus Main Qualifier, Cloud9 won 23 T-rounds and 40 CT-side rounds, months later with Slemmy in tow at ELEAGUE week one their round wins were 10% more balanced winning 56-T rounds and 66-CT rounds over the course of the tournament.

Before the Valve ruling on coach participation, Cloud9 had a fairly orthodox means of improving: move your less-skilled in-game leader to a coaching role and adding a better fragger as the fifth. In all likelihood, adding Autimatic in-game with Slemmy calling from the coach role would have been a winning strategy. Unfortunately, the pickup of Autimatic and the departure of Slemmy was officially announced just hours after the appearance of Valve’s letter, which relayed their intentions with respect to coaching. The timing is tight, but if Slemmy chooses not to stay as coach due to the limited role of coaches moving forwards, then it’s hard to lay much blame at the feet of the Cloud9 organization, but as of right now, it looks like Cloud9 is in the same dilemma they faced earlier in the year.

According to Jordan “n0thing” Gilbert, the team will be sharing in-game leading responsibilities with Jake “Stewie2k” Yiptaking, the most responsibility followed by himself, Mike “shroud” Grzesiek, Autimatic, and Tyler “Skadoodle” Lathamin in that order. While this sort of system has rarely been tried before, it still bears an uncanny resemblance to the Cloud9 that mightily struggled on T-side earlier this year without an experienced in-game leader.

At the end of the first half of this year, CLG looked like the best North American team thanks largely to their fourth place finish at Global eSports Cup. However as the months rolled on, CLG continued to over perform time and time again which led to Jacob “FugLy” Medina’s removal in May and the departure of their star players Josh “jdm64” Marzano and Tarik in the months thereafter.

While CLG was able to add Kenneth “koosta” Suen, who had been a highly hyped player before a series of disappointing showings on Team Liquid, every other roster change since seems usually underwhelming. The most recent losses of Tarik and their coach Faruk “Pita” Pita, who was playing as a temporary replacement for FugLy, seem to cement the wayward status of CLG, who had been a perennial top three North American team in 2015.

Replacing Tarik and Pita are the mostly unknown players Ethan “nahtE” Arnold and Yassine “Subroza”‘ Taoufik, who both are best known for their play in ESEA this past season. Formerly of Team Prospects, NaHtE, has the typical resume of a young talent joining a much bigger team. NaHtE is very young at 16 years of age, he has no LAN experience, and is known for his frequent appearances in Rank S pugs. Subroza is older, at 19, similarly inexperienced, but is not even known for his Rank S play as he is not qualified to play in that division.

While the pickup of SicK and Twistzz was surprisingly successful for the TSM, CLG’s moves reek of desperation rather than reasonable  scouting. With Cutler picking up the AWP, Koosta switching over to the rifle, and Hazed taking up in-game leading responsibilities, CLG has already taken on an extreme amount of risk. It seems unlikely that this odd combination of new players and old players taking up new positions will catapult CLG back up to the top of North America. Look for CLG to struggle in the middle of the pack alongside Selfless, Echo Fox, and NRG.