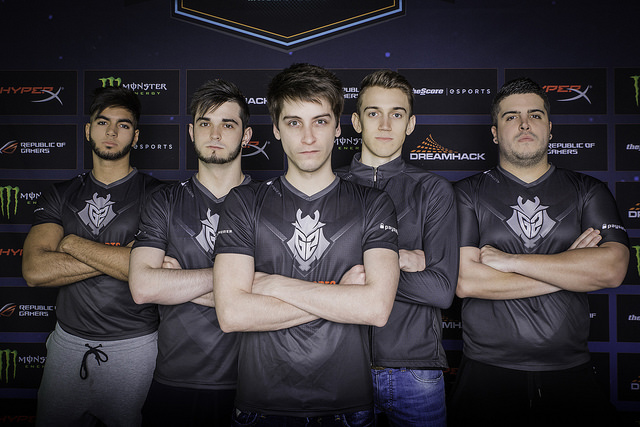 At the ESL Pro League Season 3 Finals, G2 Esports showed an unseen side to their team and caused upset after upset. Crescendoing with a best-of-five series against the current champions of the world, which G2 almost won, this team caught the attention of everyone in the Counter-Strike community. Under this spotlight, they continued to perform, defeating several top teams in online matches. Their talisman, Richard “shox” Papillon, is who I see as the most instrumental factor in G2’s epic rise to the very pinnacle of professional Counter-Strike: Global Offensive.

Prior to G2’s revived state in the ESL Pro League Finals, the team underwent a roster change which led to their In Game Leader (IGL) being replaced by a less known face in the French scene. On April 9, it was announced that Kevin “Ex6TenZ” Droolans would be replaced by former LDLC White player Alexandre “bodyy” Pianaro, which led the community to question how the G2 lineup would fare without the experienced mind of Ex6TenZ. This roster change came as a result of G2 failing to make it out of the group stages at MLG Columbus 2016, after suffering two defeats at the hands of Virtus.pro. G2 stated that their intention behind this roster change was for the lineup to “solidify its position among the best in the scene,” which certainly seems to be the result of boddy’s addition.

With a reshaped roster and shox confirmed to be taking over the role of IGL and captain of the team, G2 had much to prove. Their initial results with the recently added bodyy were underwhelming, as the team crashed out of DreamHack Masters Malmö in the groups. After suffering embarrassing defeats by the hands of GODSENT and Counter Logic Gaming, the latter team crushing G2 16-2, the decision to remove Ex6TenZ seemed poor. Mediocre results were all G2 were able to supply in the aftermath of DreamHack Masters Malmö, until the team showcased a massively improved look performing in the ESL Pro League Finals.

G2 came into their first game in the Pro League Finals as heavy underdogs, as they prepared to face the reigning champions of Counter-Strike, Luminosity Gaming (LG). However, in an upset that few would have predicited, G2 managed to defeat their Brazilian opponents on Train. After surpassing the MLG Columbus champions, G2 handily beat the American OpTic Gaming to top their group.

Coming into the business end of the Pro League Finals, G2 then faced Swedish giants Fnatic in a best-of-three. Despite missing the star of their team Olof “olofmeister” Kajbjer, Fnatic came into the series as the favourites to advance to the grand final. The French duo of shox and Cédric “RpK” Guipouy prevented this, and their star performances, coupled with a strong showing from the rest of the team, meant G2 took the series 2-1 and booked their place in the grand final.

Although G2’s previous upsets had been exceptional, meeting the best team in the world, LG, in a best-of-five was seen as too much for G2 to handle. Depth of map pool and individual talent on the team both favoured LG, but G2 provided a spectacular series and took LG to five highly contested maps. The last and deciding map, Inferno, went to overtime, a fitting way to end the battle that the two teams had fought. Although LG took the win in overtime, G2 impressed everyone in the scene with their performance. Topping the scoreboard for G2 were shox and Adil “ScreaM” Benrlitom, who both caused more damage, on average, per round than any of the LG players. The ESL Pro League Finals set the stage for G2 to shock and dominate the world of Counter-Strike, as they showed that they can play with the best and very nearly win. This is an unfathomable situation when thinking that a similar lineup had failed to even make the quarter-finals of MLG Columbus.

A player who I think deserves a hefty amount of credit for G2’s incredible form is shox. With Ex6TenZ leaving, shox was confirmed to be filling in the role of IGL. Not only is he the new tactical mind of the team, in a documentary released by the G2 organisation shox is seen captaining and motivating his teammates. To fill the shoes of an IGL who was world renowned for his command of the game, and representing so much of his team’s firepower, places shox in a realm of his own, and in my eyes he fits in with the true elites of the professional scene.

Despite juggling so many roles on the team, shox is still seen topping the scoreboard in a lot of games his team competes in. The way the Frenchman excels in so many aspects of the game is why I credit a lot of G2’s success to him. A numerical achievement of Papillon is his HLTV.org rating over the last three months, which is an incredible 1.18. Another member of G2 frequently seen top fragging these last few weeks, ScreaM, sits on a rating of 1.12. These two stars of the team were the main reason G2 stood a chance of beating LG in the finals of the Pro League, both sitting on a monstrous 121 frags over the five maps. That is an average of 24 kills per map, a world class figure considering they played a world class team.

G2 have kept their consistency over the last couple of weeks, having beaten the likes of Fnatic, Virtus.pro and NiP online. With the roster seeming less like underdogs by the week, the mainly French side look in shape to challenge and beat any and every team out there. Led by shox, who I see as one of the five best players in the world right now, G2 truly look like a team capable of anything.