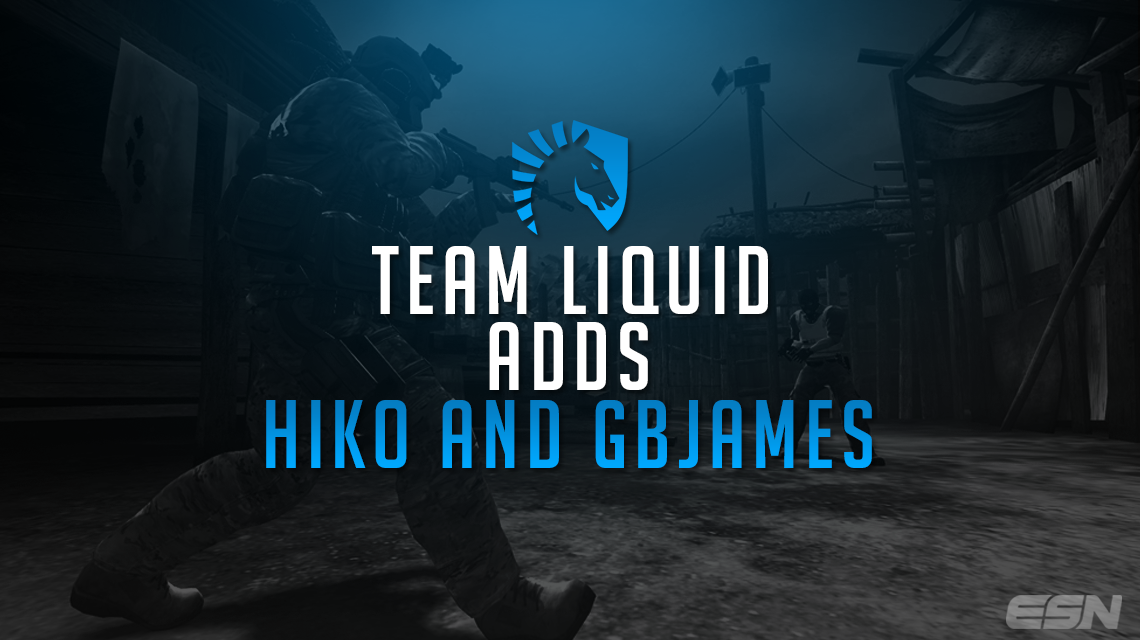 Team Liquid must be delighted to welcome one of the best players in North America to their Counter-Strike: Global Offensive competitive team, taking place of support player Kyle “flowsicK” Mendez, who’s been recently slacking. Team Liquid has finally made the decision to add Spencer “Hiko” Martin permanently, which in turn means flowsicK will no longer be a part of the team.

In addition to Hiko, TL has been working with a new coach, James “GBJames” O’Connor, who’s officially joining the ranks of the team. James spent the past few months building a relationship with players and management, and now he is the CS:GO team’s head coach and manager.

Today Hiko announced his next chapter of his CS:GO career: joining Team Liquid on a permanent basis.

Hiko was recently playing on team Nihilum. It was a very risky move to make, but he wanted to get back into the competitive scene. When Spencer first joined, he was approached by Kory “Semphis” Friesen who was extremely confident in the team and believed they could be a top-tier team in America. However, it was apparent that this team had problems, even before Hiko and Semphis joined. Of course they tried to fix things, letting everyone be comfortable and play their positions, but that made the roles mess up. Also the team had two types of calling with Semphis’ and Soham “valens” Chowdhury’s conflicting, opposite style. Nihilum dropped this team two weeks before ESL One Cologne qualifiers which the timing couldn’t be worse to do that. The move dropped the team’s motivation hugely heading to the event.

After failing to qualify for ESL Cologne, it sparked a passion Hiko used to have in his career. Looking through the options, Liquid was the obvious choice. Everyone assumed that North America would have a huge roster shuffle but nobody knew which teams. But fortunately for Hiko, former teammate and longtime friend, James, gave him a call asking if he would join Team Liquid, Hiko obviously said yes. And since he wasn’t contracted with Nihilum it was easy to make the switch.

Hiko has been standing in for the team for about two-three weeks and is now an official teammate. For a while, people have been branding him as a greedy person and with delays for joining the team, people thought it was all over talk about salary. Everyone thought Hiko makes “2.5x or more” than his teammates, but he doesn’t. It took so long because of Hiko’s personal deals and sponsorships. Hiko has also addressed how he is not a team ruiner and has always valued long standing teams.

Hiko has previously said that big organizations are bad for players as they don’t treat them particularly well but he has worked with both owners of Team Liquid and is positive he will be happier here than with other organizations. It seems like TL treats their players well and fair, therefore they’re respected for that. Hiko still has the heart and passion as he did before and wants a championship, is this the NA team to do it?

It must’ve been a whirlwind re-entering the CS:GO community for James, as he left three years ago with an early lead and on the best team in NA (DaZeD, Hiko, Moe, Pinekone and himself). James and Moe got switched with Semphis and [email protected] and that core went on to do great things. Weirdly, the reason James got back into CS was his wife after meeting and talking extensively to LuckeyTed and Pinekone about how big gaming is, she demanded he got back into Counter-Strike. He is blessed to have so much support from his wife and the support he has gotten all around and got even more lucky after getting picked up by Team Team Liquid. . Of course James has to relearn the game but the fundamentals haven’t changed much since his departure.

James has played over 10 years of invite-level competitive play, coached over 200 teams in 24 different countries with lessons, and lead nine teams to invite. He has taken lessons and played with the top minds in CS and collected many unique perspectives and techniques because of it and was the in-game leader for every team he’s ever been on. James’ goal is to implement the fundamentals he’s learnt and vastly improve Liquid’s teamwork.

Liquid’s skill is definitely unquestionable but players with such skill depend less on their teammates, James believes this is the biggest barrier currently so he will try and extract their identity and support them to further develop.

What James will be doing:

James will evaluate the team and look for gaps, research other teams, watch demos and coach live matches. Also, James could eventually become the in-game leader and let the five players focus on fragging. Who is better to do calling than someone who can see all five players screens, after all it’s what they do in sports. Liquid will have a clear advantage in high profile matches with James.

The first roster management decision he did was add Hiko to Liquid. James has a good relationship with him and considers him a close friend. He also recruited him in a previous team which ended up great for the both of them. They’re hoping to succeed together, albeit in different roles as James was playing at the time.

James and this lineup are seemingly against often roster changes and that a team should exhaust every idea and option before that change. It kills team growth, makes people less trustful and unwillingness to admit to mistakes.

How well do you believe Team Liquid’s CS:GO team will perform with their latest two additions? Let us know over at our Twitter – @ESNCS.