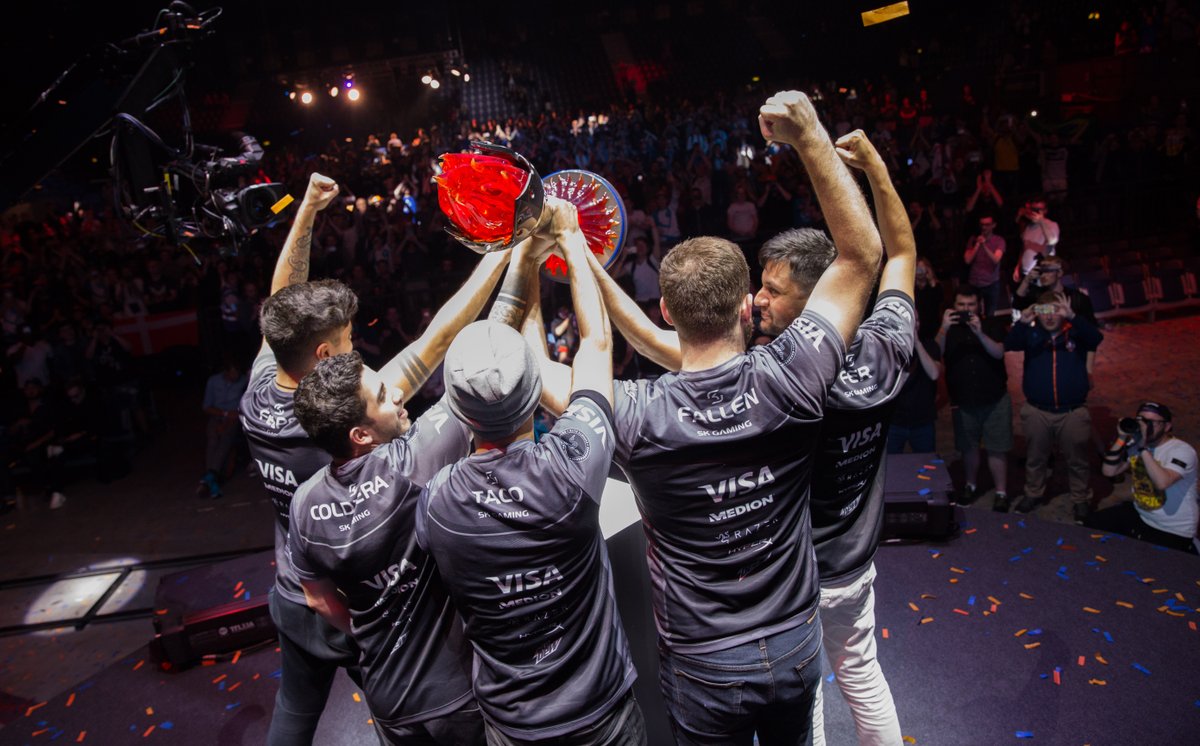 SK Gaming and FaZe Clan contended for the glory of winning Season Three of ECS in London, England today, and the final result was almost unpredictable.

FaZe swept the semifinals thanks to a late choke from Cloud9, and SK survived the same stage by going the distance with Astralis on three maps.

In the map pick of the grand final, SK typically chose Mirage, while FaZe dangerously selected Inferno as their own pick. Train was left over from the map veto process.

FaZe began Mirage with several intelligent split Terrorist executes on both sites, resulting in a overly passive SK in the first half. SK responded to FaZe’s hyper-aggression by adjusting their defenses accordingly. The first half ended at 10-5 in favor of the boys in red.

The Brazilians came back with good T side coordination to knot the game at 11-11, but Finn “Karrigan” Andersen led FaZe and stopped their momentum with a few economy-breaking double-AWP setups. Using early round picks for easy Counter-Terrorist man advantages, FaZe ran away with SK’s map pick with a 16-11 scoreline.

Håvard “rain” Nygaard and Nikola “NiKo” Kovač both finished as top-frag at 27 kills, and NiKo had an effective 113.4 average damage per round.

The initial side of Inferno consisted of slow executes from FaZe and good defensive double-AWP defaults from SK, with both teams trading rounds throughout. SK gained a slight lead later in the first half to end it at 9-6.

Although FaZe won the second pistol round, SK slowly increased their lead to 12-7 until FaZe recovered their economy. With an improved eco, FaZe closed the gap to a 12-11 margin until SK strung together several great executes. FaZe later adapted on defense as both teams traded rounds until the score reached 15-14, where SK forced overtime in the 30th round.

FaZe held down both sites to gain a slight 17-16 lead after the first three rounds. SK had better defenses thanks to a double-AWP setup, while FaZe’s numbers dwindled down in each of the last three overtime rounds. Inferno concluded at a 19-17 scoreline.

Fabien “kioShiMa” Fiey of FaZe and Fernando “fer” Alvarenga of SK both top-fragged at 31 for their squads in the overtime thriller.

SK dominated FaZe throughout the first half of Train by stacking A site almost every time, while only giving up two rounds after an 11-0 lead. The first half ended at 13-2 with the Brazilian side ready to lift the trophy.

The second pistol round went to FaZe, and they quickly came back into the game with a handful of consecutive successful defenses on A site, making the score 13-7. SK edged closer to winning the game with a bomb defense at 14-8, but FaZe proved they weren’t going out without a fight by stringing six more rounds together on their Counter-Terrorist side. Time struggles plagued SK on their T side later on, giving FaZe a 15-14 lead. A fast A-take from SK forced overtime for the second map in a row.

FaZe risked a double-AWP setup on their defensive side, but it only worked in the first round as SK answered back with a double-AWP setup of their own. FaZe maintained a one-round lead at 17-16 before going into the next three rounds. SK’s exceptional A courtyard management and retake ability earned them the win on Train with another 19-17 scoreline.

NiKo and Aleksi “allu” Jalli may have led FaZe with 34 and 36 kills, respectively, but it wasn’t enough firepower to clinch the championship win over SK.

SK take home a whopping $250,000 and their fourth championship title of 2017 with their 2-1 series win over FaZe. The Brazilians are definitely looking like the best team in Counter-Strike as they head into ESL Cologne, which will take place from July 4 to July 9 in Cologne, Germany.