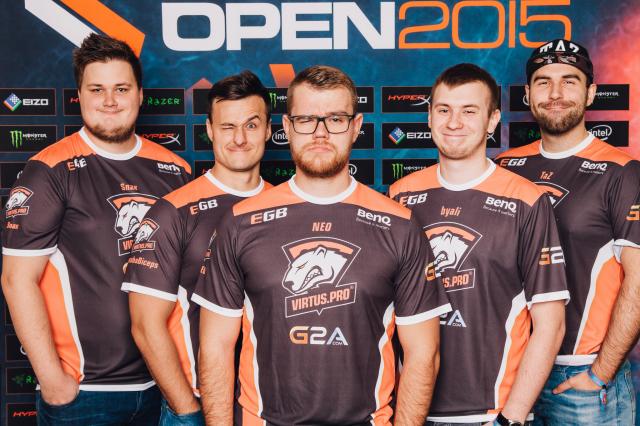 Group Stage A & B

Preview of Group A:

Coming into the CEVO Season 8 Finals after being eliminated by G2 Esports on the last major (DreamHack Open Cluj-Napoca 2015) in the Quarter Finals. Virtus.pro should be angry, they were always a top 5 team and they still are but this line up wants wins, they want to win every event and it wasn’t possible to win the last major so they will be looking to win this event. Looking to Virtus.pro group it’s pretty obivous that they will get out of the groups as first seed. I’m quite interested to see Conquest at a LAN Event, lets see how they play tomorrow. But in the group stage Virtus.pro should be able to get that first seed, that is my prediction, opinion.

Team Liquid after not getting out of the groups of the last major I see them getting the second seed of Group A. At the major they played really well and at this event they have everything to show that they can compete versus the best teams in the world. It should be fun to watch Team Liquid vs Virtus.pro , I can see them winning vs Virtus.pro but regardless I think they will get the second seed of Group A, Team Liquid has the skill and potencial to win against teams like Team Dignitas and Conquest , if they win vs Virtus.pro it will be interesting to see the playoffs.

Team Dignitas after failed the top 8 of DreamHack Open Cluj-Napoca 2015 they will come stronger and angry but I am afraid that it will be not enough. After tenzki replacing schneider, Team Dignitas became weaker. They lost a really good player and an incredible fire power and now with tenzki I don’t know if they can do great things. My prediction for Team Dignitas in Group A is third place. I don’t see them getting out of the group A with Virtus.pro & Team Liquid. I can see them winning against Conquest and that’s about it. Not much to say about this team in my opinion.

I don’t know that much of this team. I have been watching them playing online games and they really surprise me with some of their results. I am looking forward to see them tomorrow against some of the best teams in the world. The only matchup that I see them winning is vs Team Dignitas, but we will see! Sadly I think they will be 4th of their group but I am sure they will show some good cs tomorrow!

Preview of Group B:

Natus Vincere after their incredible run at the last major I think they will bring the same A-Game as they played at the last major. I think GuardiaN will destroy again and this time he will have everyone’s help. I don’t see them losing any game till the playoffs, they will show strong performances and the only team that can actually stop them in their group is Luminosity Gaming, but lets see what happens. My prediction is that Natus Vincere will get the first seed in their group with any loss.

Titan after failing at major they will try to get out of the group B and they will show us the good old Titan. I have a feeling that they will show a great performance and if they don’t I think it will happen rooster changes in the future. So this is kind of “All-In” for this line up. They have to get the second seed and I believe they will. They will only lose vs Natus Vincere but it will be a good game to watch for sure!

Luminosity did an awesome major and once again they secured the invite for the next major wich is great! This line up is sick with so much talent and fire power. One of the nicest teams to watch but can they play at the same level as before? That’s the question, in order to get the second seed they need to win games vs teams like Titan and mousesports. It all depends if FalleN and coldzera shows up for the match, if not they will have a hard time. Sadly I don’t see them getting the second seed, so my prediction for them at this event is 3rd place at group B, they will win vs mouz.

mousesports after failing to qualify for the top 8 against G2 Esports wich by the way they replaced them at this event, they will come here and try to do a nice tournament. Don’t get me wrong, I really think that they can get the second seed but that requires to get the “god” NiKo, the awp skills of chrisJ and the mad fragger nex. And I don’t think that will happen, honestly they are in the same situation as Luminosity Gaming, anything can happen for them but can they beat Natus Vincere and Titan? We will see, my prediction for mouz is 4th of their group, nothing more.

Preview of the Playoffs:

If I am right, the playoffs will look like this – Virtus.pro against Titan and Natus Vincere against Team Liquid.

I will try to do my best and preview game by game, I hope I’m right and I hope you will enjoy my preview and predictions!

Quite interesting match up if you ask me! I can’t remember the last time that Titan won against VP in a BO3 game. However, I think it all depends of the veto. Titan might have a chance if they ban overpass and mirage. If they can play something like cobblestone and dust2 I think they can win against them if not it will be hard. The thing is Virtus.pro can play almost any map, they are beasts on T side but Titan is really good on cobble and dust2, I can even say better than Virtus.pro on those maps. But lets say that Virtus.pro bans cobble and dust2 right? Titan will choose inferno, Virtus.pro will choose train and the last map will be cache. If this happens I think VP wins 2-1. So Titan’s best chance is to play either cobble and dust2 or dust2 and inferno.

Either way, my prediction is 2-0 for Virtus.pro.

If this actually happens I think Team Liquid has no chance, simply because they can’t compete against NaVi in all maps. It will be one sided match up, I will have to give the edge for NaVi, a quickly 2-0. Team Liquid can win a map, maybe cobble but I think NaVi should and will ban cobble, so they have no chance against a team like NaVi.

Preview of the Final:

If this happens, wich I’m 80% sure that will. It will be an awesome BO5 to see and you can’t miss it! We’re talking of 2 top 5 teams in the world facing eachother in a BO5 match up!! I’m looking forward for this and a fun fact if this happens it will be the second time that they will face eachother in a BO5, in CEVO finals. If you don’t remember, the final of CEVO Season 7 Finals was Virtus.pro vs NaVi , and Virtus.pro won 3-1. But this time it won’t be that easy, I think we can all agree that NaVi is a better team, a stronger team and they will look for revenge that is why I’m going to give the edge for NaVi. I honestly think that NaVi will win this event, it all depends of how GuardiaN plays, he is always a monster but NaVi needs him more than never. They need to win this event, it will be so good for them. My prediction is 3-2 for NaVi.

I hope you enjoy this kind of articles and I am really sorry for any kind of errors. English is not my native language and I don’t speak that well. But I’m doing my best in order to give you guys the best articles and predictions, bare with me.

That being said my final standings for this CEVO Season 8 Finals will be:

I want to thank every single of you that reads and likes my articles, I want to thank my friends for asking me to write the first article, it gave me the dedication and motivation to write more and I will not give up of this dream! Thanks Thorin and lurppis for the inspiration and I hope someday I might be as good as you guys are.

Don’t miss any action from tomorrow, make sure you check HLTV.org and/or CEVO Season 8 Finals , thanks for reading my second article and see you soon!