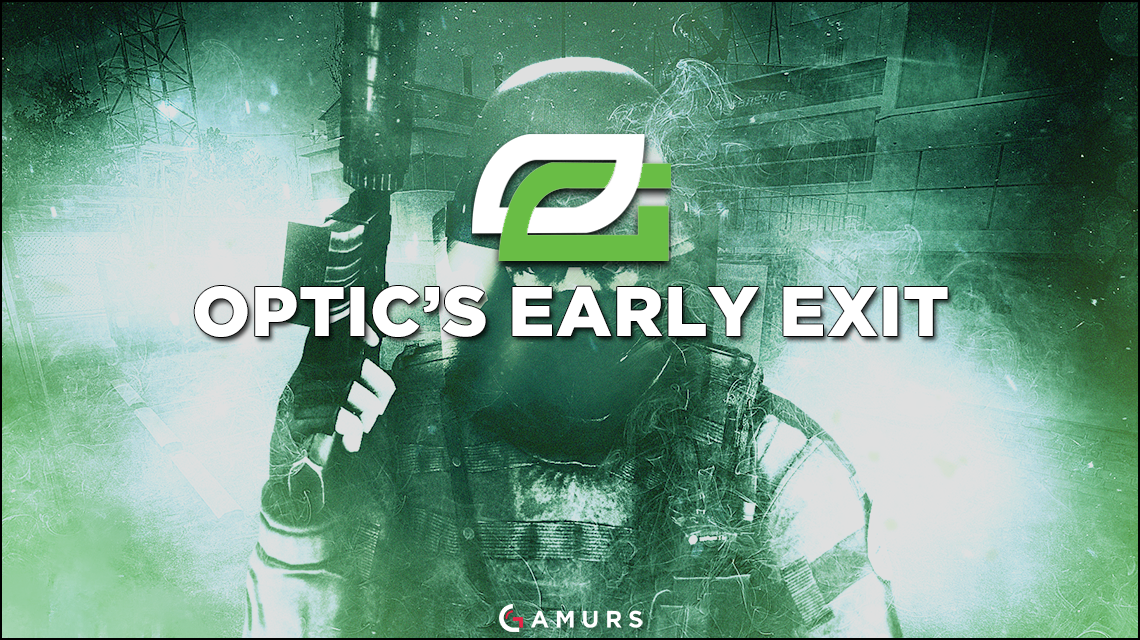 OpTic Gaming’s fourth-round elimination from the ELEAGUE Major’s swiss style opener has been frequently portrayed through two opposing didactical lenses. The typical OpTic admirer will contest their elimination was simply a result of the format. The second, more prevalent opinion argues that OpTic had more than sufficient opportunities to advance into the bracket stage, and it is instead their own poor play that earned their elimination, regardless of any inequity in the formating.

But both sides obscure a more complex picture through an un-nuanced evaluation of a single idea. While the validity of ELEAGUE’s specific implementation of the swiss system format certainly looms large in question of OpTic’s playoff worthiness, or lack thereof, OpTic’s performance shouldn’t be evaluated simply in terms of that single issue. Pertinent questions and a refined evaluation of their play has been fairly absent in the public discourse since their early dismissal.

What mistakes were made in the veto phase and how did the randomizer affect their chances?   How did the shifting dynamics of OpTic’s T-side under the leadership of Peter “stanislaw” Jarguz affect their chances? Who failed to meet expectations on an individual basis?  And what other issues could have led this shoe-in playoff team to meet early elimination?

Ostensibly, OpTic took two losses playing two of the best teams in the world, on a map where that team is considered to be the best in the world, or at the very least world-class, having played Astralis on Train and Virtus.pro on Cobblestone. While the ability of a team to find the best possible matchup in Valve’s bizarre, but mandated, best-of-one pick and ban system is limited, what mistakes, if any, did OpTic make in these first two map draws?

In their first matchup versus Virtus.pro, the veto phase went as follows:

With the weaker position of having two bans but choice of side, OpTic choose a fairly orthodox strategy, removing their permaban, Mirage, and Virtus.pro’s best map, Nuke, which also is a map OpTic mostly shun. With the huge discepreciancy in prowess on Nuke and OpTic’s unwillingness to play Mirage under any circumstances, there doesn’t seem to be anything that could have improved on here. If anything, Virtus.pro mis-vetoed by removing Train rather than Cache and it was later suggested via their match versus North in the semifinals that the Polish side wasn’t especially strong on that map. And even with the randomizer choosing Cobblestone instead of Cache, you still had to think OpTic had a good chance to win, given their very close previous contest with Virtus.pro on Cobblestone in the fifth round of ESL One New York swiss, which OpTic barely lost 16-14. While Virtus.pro won the map, near-miraclous plays and clutches such as Snax’s round 26 1v2, helped drag Virtus.pro over the finish line to secure their round one win.

Against Astralis, OpTic had the three-ban advantage and also went into the matchup with far more relevant data, as OpTic played Astralis in a best-of-three in both the finals of ELEAGUE Season 2 and ECS Season 2, as well as a best-of-one in the ECS group stage. Here, the bans went as follows:

Just like their previous best-of-one matchup, Astralis banned both Cache and Cobblestone, while OpTic again removed Mirage and Nuke. What changed was that OpTic decided to ban Dust2 instead of Train, which was surely prompted by Astralis’s easy victory over OpTic on Dust2 in their previous best-of-one. In this veto, the most questionable call from OpTic is their choice to ban Nuke over Train. Despite favoring Train themselves, Astralis defeated OpTic on Train in both of their finals bouts, winning 16-9 at ELEAGUE and 16-6 as ECS. While neither OpTic nor Astralis favors or plays much Nuke, perhaps the map would have given OpTic a greater chance at an upset over the world’s number one team instead picking a map where they are known to be weaker.

However, at that time, Astralis had just recently come off of an embarrassing upset loss to GODSENT on Train in the first rounds, so perhaps OpTic’s choice was not terribly unreasonable. Still, when the teams met again on Train per the randomizer, the result was the same. Astralis won 16-12. But, here again, you have to wonder about OpTic’s chances if the randomizer went to Overpass instead of Train. OpTic lost to Astralis 16-6 in the ECS finals on Overpass, but won on the same map in game three of the ELEAGUE Season 2 finals to win the tournament.

Style of Play and Individual Strengths

While OpTic’s vetoes were fairly sound, for the most part, how well did they actually perform in-game? Were there any obvious flaws to their approach strategically or otherwise?

Looking back over the team’s past performances, OpTic has made some key in-roads to improving their Terrorist-sides over the past few months. In the “post-Mixwell, pre-Tarik” era when Damian “daps” Steele was still acting as the in-game leader, OpTic had a fairly set style of play on the Terrorist side of the map. Most of the time in the early rounds, OpTic would fan out to prevent Counter-Terrorist pushes while Oscar “mixwell” Cañellas would poke and prod for an early pick with either the rifle or the AWP. If a CT push wasn’t punished or if Mixwell didn’t find an early kill within the first 45 to 60 seconds of a round, OpTic would form up as five man unit and execute onto a site, usually from a single point. At the time, OpTic only had one true entry player in Will “RUSH” Wierzba, as Mixwell split his time between being an entry rifler and an AWPer, so executing as a five man unit was more-less a necessity when Mixwell carried that AWP, as a split-take would require an entry player in each offensive group. While their style was stable and perhaps even dependable, it obviously limited OpTic’s variability and ability to surprise opponents.

While many justifiably credit Stanislaw for adding more tactical diversity to OpTic after he took over as the in-game leader following the removal of Daps in favor of Tarik “tarik” Celik, the former aggressive rifler of CLG, opened up obvious opportunities for OpTic on the T-side. Those improvements were somewhat slowly rolled out with OpTic still looking entrenched in their old ways at ESL One New York, but by the time they started to have a string of strong LAN appearances in November and December, their development was readily apparent. OpTic increasingly started to swarm on sites from multiple points with less straight-forward timings and looser mid-round play, earning them scores of T-rounds versus some of the best teams in the world. The combination of high individual form alongside their diversified T-sides greatly helped OpTic win ELEAGUE Season 2 and make the finals of the ECS Season 2 Finals.

At the ELEAGUE major, OpTic, under Stanislaw, made even further developments as they experimented more with pacing, rushing in far earlier in rounds on occasion in contrast to their usual more middling pace. Even with their difficult schedule and fairly disastrous 1-3 record in the ELEAGUE Major’s swiss, OpTic still won a majority of their T-side rounds with 27 wins and 25 losses. However, it was a different story of the other side of the map.

The modern OpTic, or at least the OpTic of the past half year before the very recent departure of Stanislaw, was a fairly skilled team, but it was never seen as the most skilled NA team and was not a frightening team at all on the global stage. After the addition of Tarik, expectations in terms of performance were fairly clear from the onset. Tarik was supposed to add much more firepower to the team as an entry fragger and hopefully output star-level performances in conjunction with Mixwell. RUSH would be the team’s third threat that could occasionally perform up to the level of the team’s stars, while Stanislaw and Keith “NAF-FLY” Markovic were expected to perform more averagely. Stanislaw could usually be more consistent rather than exceedingly strong or poor, while NAF-FLY would be more variable with the occasional high impact map.

These expectations were more or less met in OpTic initial tournament forays at ESL ONE New York and the ESL Pro League Season 4 Finals, with only Tarik really undercutting expectations. That seemed to be corrected by Northern Arena Montreal, as both Tarik and Mixwell finally went off in tandem to find the team’s first impressive result with this five-man lineup. However, when OpTic hit their peak over two consecutive weekends in December, winning ELEAGUE Season 2, and finishing second at ECS Season 2, RUSH not only performed on-level with Mixwell and Tarik, he stood out as the team’s leading performer, which even earned him MVP honors at ELEAGUE Season 2. NAF-FLY also had an unbelievably potent performance in the finals of ELEAGUE Season 2, which greatly helped OpTic overcome the soon-to-be best team in the world, Astralis. With Tarik, Mixwell, and RUSH performing at a high level, the very recently unimpressive OpTic suddenly launched up the global rankings and was widely considered a contender at the ELEAGUE Major.

But in the month-long break between ECS and the major, OpTic’s form seemed be significantly stunted. RUSH continued to be the team’s leading player at the major, with Stanislaw and NAF-FLY’s output looking somewhat lacking in comparison their December level, but a far more dramatic dropoff came from the team’s two stars in Tarik and Mixwell, who were the team’s weakest two performers statistically.

The Palpable Power of the Intangibles

While form can obviously be ephemeral, what outside factors could have negatively affected OpTic? Two key issues come to mind: OpTic’s lack of preparation and the efficacy of the swiss format. While you would assume that OpTic would have come into the major in tip-top shape given the month long reprieve, a combination of circumstances prevented them from having the proper opportunities to practice. Due to the timings tied to ESL Pro League and the major, this past December and January was fraught with heavy roster changes, both internationally and within the North American scene that continues still today.

The shuffle season, the holidays, and an extended tournament break in the run up to the major all limited the availability of scrims for OpTic. Either Team Liquid or SK Gaming could have been a useful practice partner in the run up to the major, but both teams choose to boot camp in Europe instead, which greatly limited OpTic’s options. Moreover, Mixwell had to return Spain for a significant portion of the pre-major preparation period due to a visa issue, which also further restricted practice.

But the other more obvious extraneous factor that hurt OpTic’s chances was their difficult matchups in the opening two rounds of the tournament. While OpTic did have a third life in the swiss and other teams, such as G2, had as difficult or even more difficult schedule, OpTic drew the two most difficult opponents in the first two rounds of the tournament when they, themselves, were a very highly-touted team going into the major. In a properly seeded swiss, OpTic would have faced a much weaker team than Virtus.pro in the first round, and OpTic versus Astralis certainly would not have happened in the second round following both of their first round losses. Even if OpTic had played weaker opponents, victories seemed far from assured given their dampened form and apparent impotence on the CT side, and upsets do happen, as we saw in the the Astralis versus GODSENT matchup, but the random pairing system ELEAGUE used within pools certainly did hurt OpTic’s chances.

But it was this broader perfect storm of factors —their lack of preparation, the hard opening draws, the perhaps disadvantageous picks of the randomizer, the questionable choice to ban Nuke over Train versus Astralis, the disappointing showings from their stars, and their lackluster CT-sides— that ultimately led to OpTic’s early exit.