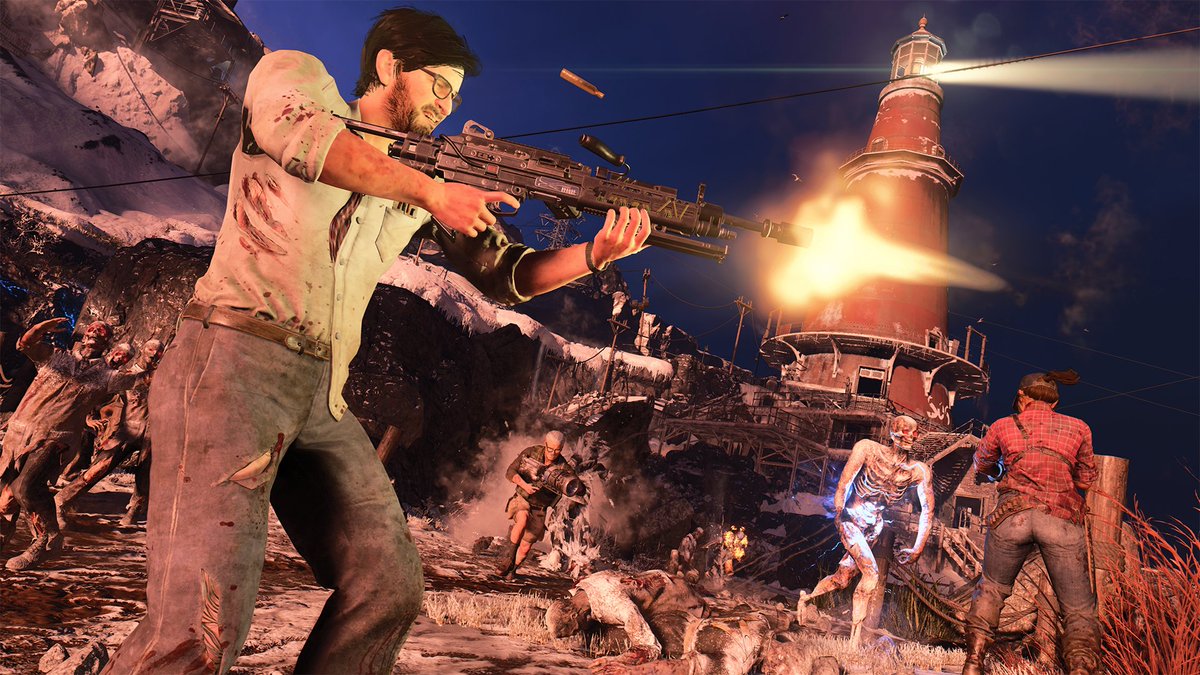 Longtime Call of Duty Zombies fans have finally received a remastered version of one of the most popular maps in franchise history as the last addition to the Aether storyline in Black Ops 4.

Tag der Toten became available in Black Ops 4 on PlayStation 4 on Sept. 23. It’s essentially a remastered version of Call of the Dead from Black Ops. It seems bigger and has more areas to explore, but George Romero is nowhere to be found.

Even though the zombified version of the famous movie director isn’t a part of Tag der Toten, it’s still a fun map that players can enjoy for hours on end. And just like almost every other Zombies map, there are several features and secrets for you to unlock on this map.

Here’s everything you’ll need to acquire to survive in Tag der Toten.

The buildable shield is one of the most important items in Zombies and that hasn’t changed in Tag der Toten. Like most shields, you’ll need to find three parts to build the Riot Shield on this map.

Once you have all three parts, head to one of the workbenches across the map to build your shield. We recommend crafting it on the workbench in Lighthouse Station (Level 2). It’s relatively easy to build this Riot Shield and you should do it as soon as you can in Tag der Toten so you can protect your back from hordes of the living dead.

1) Turn on two power switches. One is in Docks and the other can be found at the top of the ship in the room called Bridge.

2) Find a Blue Rock. It’ll be in the area of the map called Lighthouse Approach. Melee it to knock it off the wall and pick it up.

3) Head to Lighthouse Level 4. A character named Hermit will drop a platform for you to put the Blue Rock on.

Once you give the Blue Rock to the Hermit, the Pack-a-Punch will be unlocked. The Pack-a-Punch can spawn in several different spots, but you’ll be able to tell where it is because a blue light from the top of the Lighthouse will be shining on its location.

There’s also a Golden Pack-a-Punch that you can unlock to fully upgrade your weapons for just 5,000 points.

The Zipline Handle is a unique item in Tag der Toten that you’ll need to get to gain access to a new part of the map. Just make sure you’ve at least completed the Blue Rock step of the Pack-a-Punch process before attempting to acquire this special item.

To get the Zipline Handle, you have to find two Zipline Cranks. One can be found in three different spots in Forecastle, while the other will be in one of three locations in Stern. After getting these Zipline Cranks, place one on a silver box on the Main Deck and another on the Sun Deck. Then, rotate the ziplines into position at both locations.

Next, simply go to the top of the Lighthouse and talk to the Hermit. He’ll drop another platform for you with the Zipline Handle on it. Pick it up and you’ll be able to use it to go to the new area of the map called Facility Entrance.

The Facility is where the third power switch for the Golden Pack-a-Punch can be found and the Tonic perk machine is in the Decontamination area of this building. That makes the Zipline Handle an absolutely essential item to acquire in Tag der Toten.

Some of the most popular wonder weapons in Call of Duty Zombies history have returned in Tag der Toten—and there’s a way to get each of them for free. The only catch is that essentially all of the map’s doors must be open, which means you need to have the Zipline Handle.

The Tundragun is a unique version of the Thundergun that fires cryo rounds. To get a free Tundragrun, you’ll need to hit five targets spread across the map with snowballs. The target order is Loading Platform, Lagoon, Sun Deck, Lighthouse Level 3, and Cargo Hold. After hitting the target in Cargo Hold, a box beneath it will open, granting you a free Tundragun.

The Wunderwaffe DG-Scharfschütze is similar to the classic Wunderwaffe DG-2 from previous Zombies maps. If you want to get a free Wunderwaffe in Tag der Toten, you’ll first need to find an icicle that can either be located in Lighthouse Approach, Lighthouse Station, or Lighthouse Cove. Take the icicle to a melting pot in Forecastle and wait for a key to become available to pick up.

Then, take this key to the Facility and use it to open a safe in Specimen Storage. You’ll need to kill zombies near this safe to charge the item inside of it called the Vril Device. Once you can pick up the Vril Device, take it to the Hermit and put it on his platform. He’ll give you another key in return that you can use to open a box at the top of the Lighthouse that contains the Wunderwaffe.

Finally, the Thundergun is a classic wonder weapon that shoots blasts of compressed air. It’s probably the best weapon in Tag der Toten, but it’s also the hardest to unlock for free.

To get a free Thundergun, you’ll need to complete 15 challenges around the map—three challenges at five specific locations. The five spots where you can activate each set of tasks are Lighthouse Station, Beach, Forecastle, Frozen Crevasse, and Specimen Storage.

Some of the challenges are relatively simple, but a few of them can be daunting and time consuming. Once you’ve completed all 15 tasks, head back up to the top of the Lighthouse. The Hermit will drop another key for you that unlocks a separate box in Lighthouse Level 4 that contains the Thundergun.

Tag der Toten has instantly become one of our favorite Black Ops 4 Zombies maps. Whether you’re a Zombies veteran or a complete noob, we recommend playing this map. And if you do, unlock all of the items and features mentioned above to help you survive as long as possible.