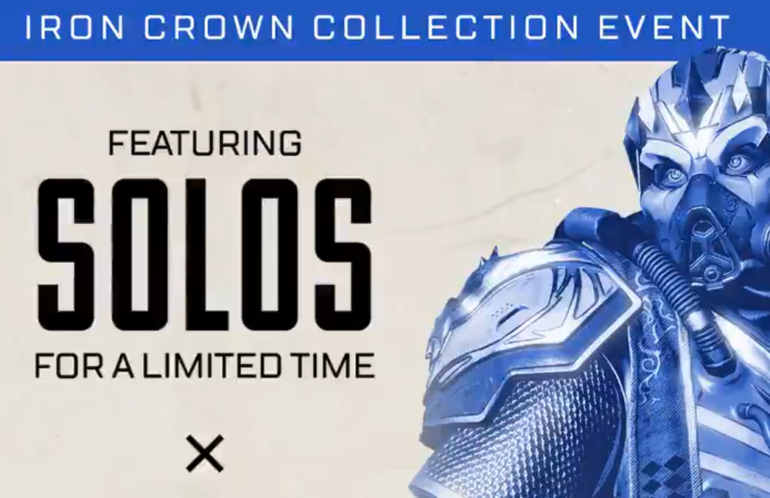 The Iron Crown patch brought the most fan-requested feature to Apex Legends—no, we’re not talking about $7 loot packs.

While some fans are pleading with Respawn to make the widely-popular Solos mode a permanent feature, others feel like the mode fell short. This begs the question: Should Solos mode remain in Apex?

Solos, scheduled to end tomorrow Aug. 27, was introduced under the pretense that it was a limited-time only event meant to be piloted for two weeks and then taken away. Now that the Iron Crown event is reaching its end, however, a large portion of the community is up in arms.

But should it be a permanent mode? Let’s have a look.

Despite all of the controversy surrounding the Iron Crown loot packs and Respawn’s employees feuding with the Apex subreddit community, Solos mode was fairly seamless.

During team play, players would jump alone and abandon their teammates, trying to prove that it was them against the world. Solos solved this issue by allowing those heroes to prove their worth. Apex players could test and improve their skills in Solos against 59 other like-minded individuals, without being bailed out by their teammates.

Similarly, players would often find themselves with teammates who rage quit or never even connect to the match. For players who don’t play with friends, getting two random teammates is a roulette that can cost you Ranked Points and a lot of grey hairs. Jumping solo means you don’t have to depend on anyone but yourself, and you don’t let anyone down other than yourself.

It’s also hard to ignore the $3 million Fortnite player Kyle “Bugha” Giersdorf won at the World Cup Solo finals. If Apex were to monetize Solos tournaments the way a direct competitor did, then Apex’s popularity could grow even more.

The biggest issue with Solos mode, by far, was Respawn’s inability to prevent teamers. Teamers—players who team up together and go around killing Solo players one-by-one—were the bane of every serious Solos player’s existence.

Though this did spawn a trend of ‘I paid back those teamers’ videos, it still was not what Respawn intended.

Players wanted this to be a bannable offense, but there was little Respawn could do to stop it.

The fact that Apex is a game with ten different champions that each have a unique ability set is specifically designed for team play. One legend’s weakness can be balanced out by another legend’s strength. In Solos mode, a smaller hitbox and superior kit would always be a better option than a huge character model with more limiting abilities (talking to you, Caustic).

Another issue with Solos mode is that it’s not ranked. This pits top-tier FPS enthusiasts against players trying to figure out how to switch weapons. This adversely affects both groups, providing little competition for great players while discouraging beginners from the game. If Solos mode had ranked tiers, the lobbies would be more balanced and players of all skill levels could enjoy the fun.

And, despite Apex’s dedicated fan base, it’s not particularly clear if the battle royale can fill up multiple game modes. During the Iron Crown event, players trying to queue for the normal mode had to wait longer than usual. Having regular Apex mode, ranked mode, and Solos may cause prolonged queue times that would affect players’ quality of life.

But the reasoning behind this is simple. The sure-way for a gaming company, or any company really, to be successful is by giving the consumers what they want. It does seem like the majority of players appreciated Solos mode even with teamers, the lopsided skill levels, or the unbalanced champions.

If Respawn’s development team can implement a Ranked Solos mode, create a system that bans teamers, and insure that queue times will remain in tact, then it can be a successful mode that pleases their player base and rakes in cash.