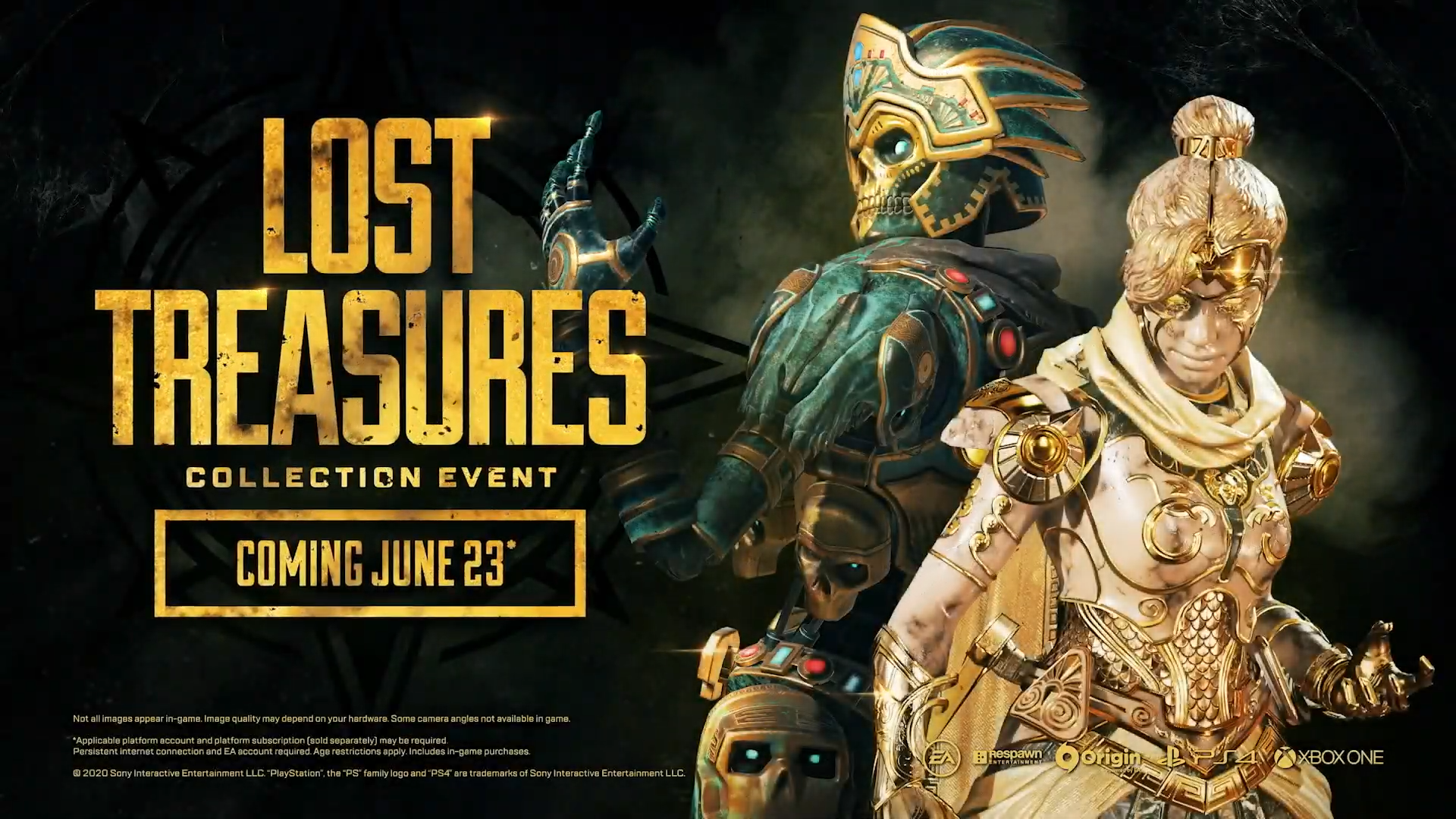 Apex Legends is getting a new event—and it’s a big one. The Lost Treasures event is adding a limited-time, treasure hunter-themed collection for players to wear in battle.

But the update is about far more than just cosmetics. Several significant gameplay and balancing changes are coming with it.

The event will usher in Crypto’s Town Takeover, a new item, a limited-time mode, several key balancing tweaks, and Mirage’s heirloom set. Players have until July 7 to take advantage of everything Lost Treasures has to offer.

It’s not a collection event without a new set of limited-time skins and Lost Treasure’s new cosmetics have a fitting theme: they’re all about treasure. Players can get their hands on a total of 24 new visuals available through direct purchase with Apex Coins or Crafting Metals, as well as in special Apex Packs.

Respawn added an exclusive event prize track with four rewards that range from a gun charm to a weapon skin. The rewards are available for all players, but they’re locked behind event-specific challenges that reset every day.

It wouldn’t be an Apex event if there wasn’t a limited-time mode. The Armed and Dangerous Evolved event is a rework of the popular snipers-and-shotguns-only game mode but with a few changes to incorporate Evo Shields into play.

Squads will spawn with Evo Shields and a Mozambique. Players won’t be able to find any armor around the map. Another twist for the new limited-time mode is that the arena won’t have any Respawn Beacons. Instead, players will start the game with a new, game-changing item.

Apex‘s latest item can cut the hassle of prowling the map in search of a place to bring your squadmates back to the fight. The Mobile Respawn Beacon, as its name says, lets squads respawn each other at will. The item will take up an inventory spot but can be deployed in most places, like a Lifeline care package.

Mobile Respawn Beacons will make their Apex debut as the sole source of respawns in the Armed and Dangerous LTM. They’ll make their way over to casual and competitive game modes after the event ends.

Apex‘s mysterious hacker has his own area on the map. Crypto’s Map Room is the newest POI on Kings Canyon and its location is fitting. It’s right outside Repulsor, where Crypto took down the tower and let wildlife into Kings Canyon back in the season two launch trailer.

The new area appears to have a far-reaching sonar that functions similarly to the scanning feature on Crypto’s drone. Pinging it may show how many squads are in the vicinity of the banners.

The Holographic Trickster is getting some love from Respawn in the only way he knows how: with a statue of himself. His new heirloom set contains a trophy, which appears to be his award for “Best Competitor in a Battle Royale Based on Skills but Mostly Looks,” a running joke after Mirage was nominated to that category at last year’s Game Awards.

Players who unlock all 24 event-exclusive cosmetics will get Mirage’s heirloom for free, but it’ll still be available in the Heirloom Shop after the event ends.

Lost Treasures is also making deep gameplay changes. The patch notes show that Wraith and Wattson took a hard hit to their kits, but Lifeline and Octane also got some much-needed improvements.

Wraith’s Into the Void will now have a lengthier activation time of 1.25 seconds and slow the legend down by 20 percent. To offset the change, the duration and movement speed of Wraith’s tactical will get an increase and she’ll be able to spot enemy players while in the Void. The reasoning behind that change is to stop players from using it as invulnerability and instead “move it into more of a repositioning and scouting ability.”

Wattson’s ultimate also took a hit. Respawn aimed to “create openings where enemies can breach Wattson positions” by watering down her capacity to fortify a position. Her Pylons will now last for 90 seconds and she’ll be able to deploy three of them at the same time. The new Wattson will still be able to set up a good defense but with the need to burn through Ultimate Accelerants to maintain it.

Lifeline and Octane are two best friends in the Apex universe and they got matching buffs in the latest update. Lifeline can use her D.O.C. to revive an ally, but the new ability took out her Fast Heal passive. Octane’s stim will now make him run 10 percent faster than before and players using his jump pad will be able to double-jump in mid-air.