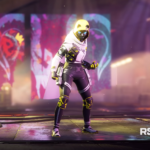 Apex Legends’ Aftermarket event is bringing a series of event-exclusive skins and an all-new limited-time mode called Flashpoint. The event cosmetics seem to have a handful of common themes, but the result is a diverse collection that includes anything from a Hot Rod Gibraltar to a Cat Wraith.

Rampart reveals some of the new skins as part of a comedy skit in the trailer. She introduces fans to the Rampart Shopping Network (RSN) and advertises individual skins, highlighting some of its qualities. Rampart describes Wraith’s cat skin as “cute but explode-y” and announces that Caustic’s cosmetic is available for the special price of just 50,000 souls (or, more likely, 1,800 Apex Coins in the in-game store).

Cosmetics for Wattson and Gibraltar have a clear connection to racing. Gibraltar’s skin makes him look like a Hot Rod, complete with flaming decals and mufflers. Wattson’s new look, on the other hand, is reminiscent of classic old-time racing cars due to its racing stripe and number.

But not all visuals make the legends look like vehicles. Lifeline’s event cosmetic dresses her in a sneaking suit, complete with a face mask and night-vision goggles. Caustic’s skin looks like it came straight out of the PayDay franchise, giving him a (cosmetic-only) sawed-off shotgun and a duffel bag full of gold bars.

In total, 24 cosmetics are available for direct purchase or obtained through event packs. Unlocking the full collection will give players Caustic’s heirloom as a bonus: a sledgehammer with a skull that appears to release Nox gas when attacking, based on the event trailer. It’s unlikely that the gas will actually deal damage, however, since heirlooms don’t deal added damage.

As usual, the event will have a free track that players can progress through and earn a Bangalore skin alongside cosmetics for the Volt SMG, L-Star, and Hemlok. Here are some of the skins we saw in the event launch trailer.