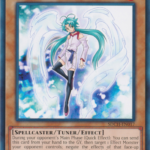 There are various types of monsters in Yu-Gi-Oh!, both official and unofficial. Hand Trap Monsters fall into the second category with most creatures being unplayable until an opponent activates a card or effect that includes various effects.

While these creatures aren’t that popular since there’s only a handful of them, it’s good to be aware of which one thrives to ensure you either include the best ones in your deck to counter a certain tactic or that you’re prepared when your opponent plays one.

Here are the best five Hand Trap Monsters in Yu-Gi-Oh!.

Effect Veiler has zero attack and defense with an important effect that can be only activated during your opponent’s turn. You can discard this card from your hand to target an Effect Monster your opponent controls to negate its effects until the end of the turn. The lack of stats makes it a good card to search in the graveyard via Masked Chameleon. On top of that, Effect Veiler is a Tuner, allowing you to syncro-summon other creatures.

Honest is the only Hand Trap Monster who doesn’t have zero attack on this list. You can play it like a normal monster and return it to your hand during the Main Phase. On top of that, if you have a Light monster attacking the opponent, you can sacrifice this card from your hand to give your creature an attack equal to that of the opponent’s monster it is battling until the end of the turn. While its stats makes it quite underwhelming to play like a normal creature, its effect to add attack can be game-changing.

Ghost Ogre and Snow Rabbit possesses the Tuner tribe, allowing you to syncro-summon it. But that is not the best part of this card. It has an effect to sacrifice it from your hand or field to destroy a card that activates its effect on the field.

Deep-Eyes White Dragon is a great card to include in your Dragon decks since it allows you to special summon this card from your hand whenever a Blue-Eyes is destroyed. If you summon it, you can target a Dragon in your graveyard to gain its attack attribute. On top of these amazing effects, you destroy all monsters your opponent controls when this card is destroyed on the field.