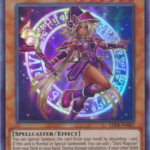 Dark Magician is one of the oldest cards in Yu-Gi-Oh! Over the years, Yugi Muto’s go-to monster in the anime has received a lot of support cards to keep it viable in the card game regardless of the meta.

While the default creature was strong mostly due to its stats, other creatures that were added over the years, such as Apprentice Illusion Magician or The Dark Magicians, have powerful stats on top of strong effects to make them relevant in the current YGO meta.

Here are the five best Dark Magician cards in Yu-Gi-Oh!

Magician’s Souls is a no-stats Spellcaster with various effects. First, you can send up to two Spells or Traps from your hand or field to the graveyard to draw that many cards, allowing you to quickly shuffle through your deck if you don’t have an answer on board. If this card is in your hand, you can send one level six or higher Spellcaster monster from the deck to the graveyard and activate one of two powerful effects, such as special summoning this card or tributing it to special summon a Dark Magician from the graveyard.

Dark Magical Circle is a Continuous Spell that has powerful effects, such as looking at the top three cards of your deck and drawing a Dark Magician among them, or banishing opposing cards whenever you do a normal or special summon of a Dark Magician. Since you have various ways of resurrecting or summoning a Dark Magician, you can benefit from the banishing part of this card every turn to overwhelm your opponent.

Apprentice Illusion Magician is a level six creature requiring a tribute to normal summon unless you discard a card to special summon it. Once you summon it, you can add a Dark Magician card from your deck to your hand. On top of this tutoring effect, you can sacrifice this card to boost a Dark Spellcaster monster that’s battling an opposing monster with 2,000 ATK and 2,000 DEF until the end of the turn.