Shroud receives plaque for his accomplishments on Twitch from StreamElements

The plaque has some of the player’s milestones on Twitch. 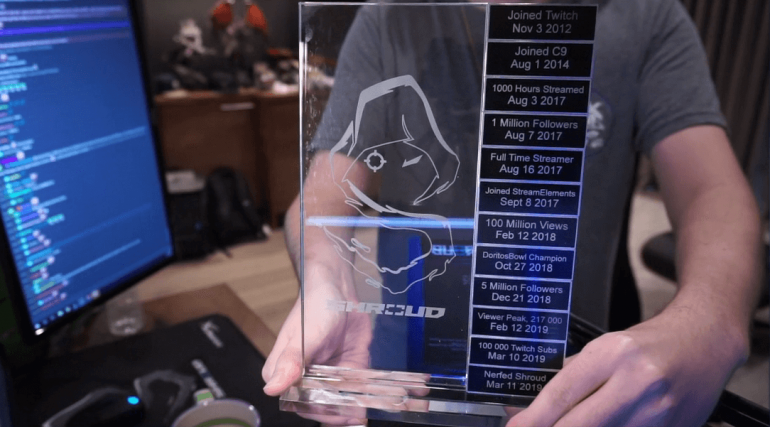 Michael “shroud” Grzesiek is one of Twitch’s top streamers. While the platform has yet to give him any prize or gift as recognition for it like YouTube does for top creators, third-party stream service StreamElements has stepped in.

The company awarded Shroud a plaque that he showed off on his livestream last night. The plaque includes the dates when he joined Twitch in 2012, when he retired to become a full-time streamer in 2017, and when he was “nerfed” after a scooter accident in March this year.

Related: Shroud gets worst CS:GO rank of his life in brief return to the game on Twitch

Shroud’s most impressive streaming accomplishments are also on the plaque, like when he reached a viewer peak of 217,000 while streaming Apex Legends on Feb. 12 this year and when he got 100,000 Twitch subscribers in March. Shroud continues to rank among the top three most-watched channels on Twitch, competing with Fortnite: Battle Royale streamers Turner “Tfue” Tenney and Tyler “Ninja” Blevins for the top spot every week.

Shroud keeps his popularity high by streaming big first-person shooter games like PlayerUnknown’s Battlegrounds and Apex Legends while also exploring less popular titles like Elder Scrolls Online and Escape from Tarkov. He casually streams other games as well, but his focus continues to be on first-person shooters—though he rarely returns to the game he played professionally for years, Counter-Strike: Global Offensive.

StreamElements is a platform he uses to manage his Twitch channel alerts and other features. Streamers can connect their accounts directly to this platform to use its services and get resources that aren’t available on Twitch or streaming software by default. It’s unclear if the platform will also send plaques to other top streamers who use its services.