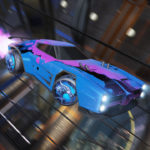 Rocket League‘s latest collection is live. Players can start collecting items from the Season One Series starting today—including the new Insidio Battle-Car and a Goal Explosion.

The series contains a variety of items that range from wheels and decals to goal explosions and, of course, a new supercar. Blueprints for the cosmetics have a chance of dropping at the end of each match, and players can also purchase the items themselves in the in-game shop based on availability.

The Series One car is the Insidio, a close cousin of the Peregrine TT. It looks like a sporty, compact vehicle vaguely reminiscent of other cars, such as the Nemesis. Rocket League‘s official Support page hasn’t been updated with the Insidio’s hitbox, but its size points to a Dominus hitbox—similar to the Peregrine TT, the Nemesis, or the Guardian battle cars.

The Insidio will likely come with some decorations from the start, but the new series also has a special decal for the new car: the Silencer, similar to Octane’s Slimline.

The Series is also bringing the Dire Wolf wheels, which resemble the popular Draco wheels with a twist: they’re crested with a wolf instead of a dragon. Sadly, the incandescent flames that add a finishing touch to the Draco aren’t present in the Dire Wolf.

The collection also features the Stipple Gait Black Market decal, the Almagest and Deep Six animated decals, and the Buffy-Sugo goal explosion. The latter displays an “extremely animated” woman with bunny ears and a heart sign when players score—perfect for Neo Tokyo, but doesn’t really fit anywhere else.

Players have three ways to get the new items: either through direct purchase in the Item Shop, from crafting Blueprints, or through trading with other players. The Blueprints system, however, means that the items are considerably more expensive than they could otherwise be since the cost to craft them is increased.