Rocket League season six is set to begin on March 9 and Psyonix is taking things to the realm of animation and comics. This will include the usual rollout of a new Rocket Pass and competitive season, along with a new arena variant, limited-time mode, and more.

With the start of the season, Neo Tokyo has transformed into a comic book to fit the “Get Animated” theme.

Season six’s Rocket Pass will include the new Nomad van and items like the Nomster Wheels, Decals, and more. Grinding through the rewards will get players a handful of special cosmetics and effects like the new Shade Raid Goal Explosion and animation or comic-themed designs.

As the developers continue to write the story of the season, other items from the Fornax Series, the legendary Black Fennec, and a new mid-season event, featuring a new game mode, will be added to the game too. The Black Fennec will specifically be available in the Item Shop, along with new Starter and Standard Bundles. 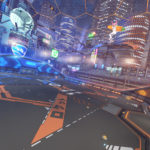 Just like with the launch of every season, season five’s competitive rewards will be delivered to users shortly after season six begins. More details will be shared in the near future about upcoming additions to the game.