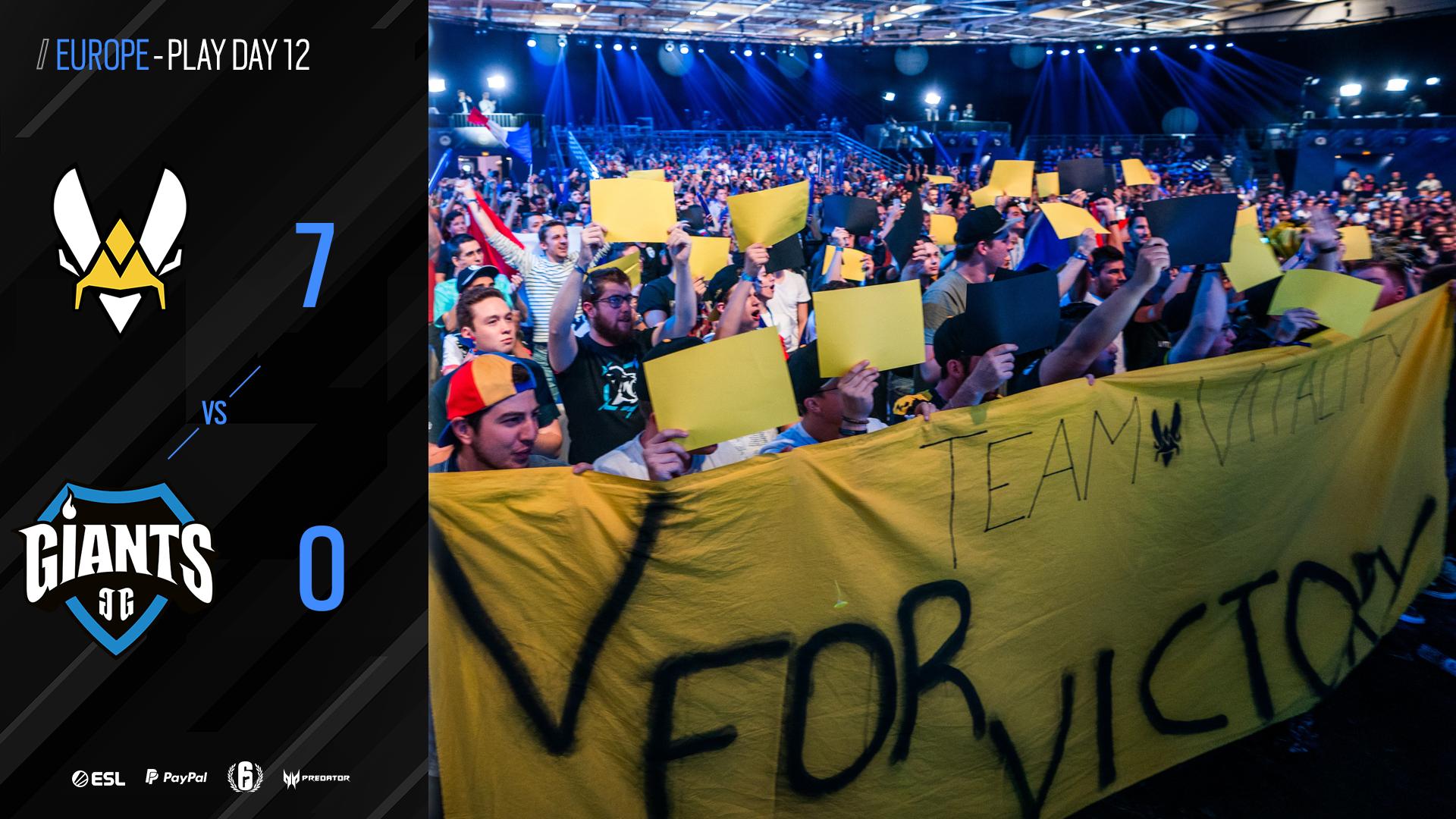 The European division of the Rainbow Six Pro League had its biggest upset of the season today when Team Vitality ran through Giants Gaming 7-0.

Giants still sit atop the European division with 28 points, but with G2 Esports closing in fast, they’ll need to get back on track if they want to hold onto their first seed in the Japan Finals. Vitality are still hanging near the middle of the pack with 19 points, just shy of Natus Vincere’s 21 points in fourth place.

You can’t discuss Vitality’s massive win without mentioning an insanely demoralizing play by Teemu “Stigi” Sairi. On a top floor roam near Cigar, Stigi patiently waited to capitalize on three vulnerable Giants players. Broadcasters Michael “KiXSTAr” Stockley and Devin “mzo” Becker both highlighted that if Stigi hadn’t shown so much patience, the round would’ve likely gone another way. Stigi taking three attackers off the board in rapid succession left Giants twisting in the wind, and from there, the momentum continued in Vitality’s favor.

Vitality’s 7-0 win over Giants gives the top-ranked squad their second loss of the season, which is a great spot to be in during the closing matchdays of season 10. The issue here is the 7-0 aspect of the loss. Giants showed signs of distress in this matchup. Their communication seemed to be lacking and there looked to be an overall uncoordinated feel to Giants. If Giants can’t pull it together in their last few matchups, it could signal a poor performance to come in Japan.

Vitality are by no means going to Japan, but if they keep up this momentum through the end of the season, they’ll be an interesting team to watch in season 11. Some big plays like Stigi’s 3K and Loïc “BriD” Chongthep’s insane round seven clutch stood out to R6 fans. Vitality were hyped up coming into season 10 and this matchup showcases exactly why fans of the esport were excited for their return to the Pro League.

Giants will be looking to bounce back next matchday in their stiff matchup with G2. The last matchday won’t get much easier for the top-ranked team, either, since Team Empire will close out their season 10 schedule. Of course, fans saw Empire fall to CHAOS earlier today, which could signal a softer matchup for Giants. Vitality will try to stay in the middle of the standings by playing their game in softer matchups against PENTA and GiFu.

The European division of the Rainbow Six Pro League returns on Oct. 11. Fans can catch the official broadcast here.