With Eevee Heroes launching in Japan next week, all the regular cards in the set have finally been revealed.

A full list of normal cards that are part of the set was shared to the Pokémon forum Pokebeach earlier today.

The set, themed around the evolutions of Eevee, boasts multiple forms of all eight evolutions as well as the return of fan-favorite Pokémon, Swampert.

For the stars of the set, the Eeveelutions already had their VMax forms revealed earlier this month. Jolteon, Flareon, Vaporeon, and Espeon’s VMax versions were unveiled in the VMax Special Set product reveal. There is an alternative art VMax version of Espeon available in a separate product from the set.

Inside each pack will reportedly be a special card that can be used to play a separate puzzle game following the story present in the artwork. 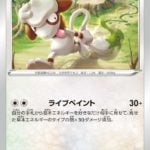 This latest card drop doesn’t include secret rares which will likely be showcased next week, closer to the launch date.

Eevee Heroes will be released only in Japan. Getting your hands on the set during release is going to be extremely difficult, however, since distributors already ran low on their stock during the pre-order phase. If you’re looking to score some, your best shot will be to check the Pokémon Center online for any upcoming raffle sales.

Those waiting for an English adaption of the set could be in luck. It is rumored some of these cards will make their way into the August Evolving Skies set. For now, though, nothing has been set in stone.

You can check out a full list of the regular cards in this set here.