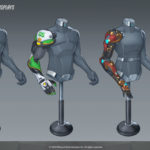 Aside from serving as an outlet for players who feel the need to engage in some immediate physical violence, props breathe life into each Overwatch map, embellishing the unique atmosphere that each one of them embodies.

Andrew Menjivar, an environment concept artist for Overwatch, posted concept art on his Artstation for some of the props used in Toronto. As one of three confirmed PvP maps for Overwatch 2, the snowy city will likely have ties to Sojourn’s backstory, a new Canadian hero revealed at BlizzCon last year.

While most places in the Overwatch universe have far more advanced technology than their real-life counterparts, Canada’s most populous city employs futuristic technology from penny press machines to newspaper boxes.

The city is prosthetic-friendly as well, a welcome relief for several of Overwatch‘s heroes. Prosthetic arms and legs are displayed openly in shops and appear to be as much of a fashion statement as designer outfits.

Blizzard has yet to announce Overwatch 2‘s release date. PlayStation Brazil reportedly said the sequel will arrive in 2020, but the post has since been deleted. If 2020 has taught us anything else besides social distancing and wearing a mask, though, release dates for highly anticipated titles are anything but concrete.