The grand finals for the PUBG Mobile Global Championship (PMGC) 2021 will take place from Jan. 21 to 23. Sixteen teams from around the world will be competing for over $3 million and the title of world champions. And based on Instagram posts from different players, part of the teams are going to Singapore to compete.

Tencent’s director of esports, James Yang, previously told Dot Esports that the grand finals would be played as a semi-LAN event with some teams traveling to a different venue while others will compete locally. Yang also said that the venue will not have a stage and the teams will be competing from a closed environment. With players spread across the world, Tencent is likely bringing teams closer to eliminate ping differences.

Based on some recent Instagram posts from the players of Alpha7 Esports, Furious Gaming, and Next Rüya Esports, it appears the chosen location is Singapore.

According to an Instagram story from Furious Gaming’s Joaquín “ScreaaM” Escobar, the Chile-based team has already left for Singapore to compete in the grand finals. The player claimed they will be returning on Jan. 24, which is one day after the end of the grand finals. He also said the players will be given a OnePlus device to play in the finals. The phone manufacturer is one of the sponsors of the PMGC 2021. 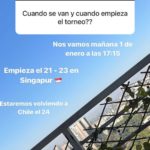 Besides this, a player of Brazil-based Alpha7 Esports put up an Instagram story also pointing towards the same. Daniel “Mafioso” Henrique posted a packed bag with the flag of Singapore and an airplane emoji next to it.

Kaos Next Rüya also posted an Instagram reel showing the players boarding a van. The caption on the picture indicated they were leaving to compete in the PMGC grand finals, which will take place in Singapore. The official Turkish PUBG Mobile account also replied to it with fire emoji.

Tencent hasn’t responded to a request for comment regarding the venue of the grand finals at the time of writing.

Singapore being a venue for the grand finals isn’t surprising. The country’s tourism board has supported esports throughout 2021, with the Southeast Asian country being a popular location for many LAN events such as the Free Fire World Series, M3 World Championship, and the Horizon Cup.

It’s unclear which all teams will be traveling to Singapore to compete in the grand finals. Kaos Next Rüya, Alpha7, and Furious Gaming are based in Turkey, Brazil, and Chile respectively.

This article will be updated when more details emerge.