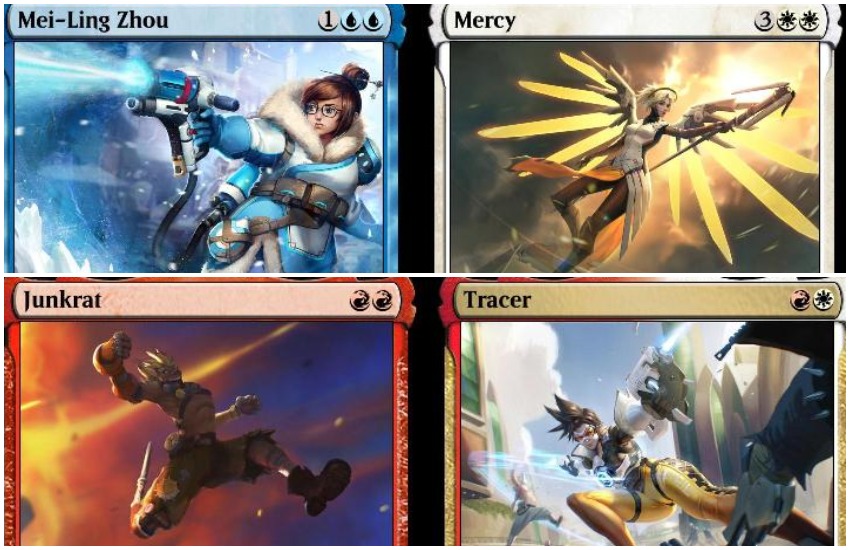 In a combined effort between fandom artists, Reddit user u/lulzee, and Joachim Holmerover, over 30 Overwatch Heroes have been mashed with Magic: The Gathering cards— showcasing stunning artwork and realistic abilities for the ultimate crossover.

With the Overwatch League entering stage three and the MTG Arena Mythic Championship III on the horizon, fans of both games have created a fandom crossover many believe should become a reality.

Brigitte and Ajani would make a great combo as both are known for boosting others around them while also providing a defense. The Brigitte Lindholm crossover captures this essence, giving her lifelink and vigilance while providing others with a plus one/plus one in attack and defense.

Combining the returning mechanic, “Ninjutsu,” in the MTG Modern Horizons set and Genji’s Shuriken skills in Overwatch—Genji Shimada (Cyborg Ninja) can create a five/one dragon token upon dealing combat damage. He’s also earned himself the mechanic “Ninjutsu,” allowing Genji to return an unblocked attacking ally to hand and have it enter the battlefield again.

D.Va is a legendary card

Adding “Nerf this” to the D.Va catchphrase list, she and MEKA have crossed over into a flying four/four with two mana abilities. D.Va can either prevent damage for the value of X or can sacrifice herself and deal four damage to each opponents creatures—much like her “self-destruct” option in Overwatch.

Jesse McCree remains a gunslinger with the fastest draw for “first strike” against opponents. Much like McCree’s “Deadeye” ability, Jesse McCree gains counters through mana costs and can deal X amount of damage to opponents when the counters are removed.

These are just a handful of the amazing Overwatch Heroes and Magic: The Gathering crossover cards in detail. All the cards are available for viewing with artist attribution here.