Niantic is future-proofing Pokémon Go by introducing a new feature that will allow players to change the form of certain Pokémon directly from the Pokémon storage menu.

The Form Change mechanic could potentially change how Niantic rolls out Pokémon with multiple forms or provide players with more ways to get some of those alternate forms more easily.

Starting with Fashion Week on Sept. 21 with the introduction of Furfrou and its various Trims, forms that change the style and color of the Pokémon’s fur, players will have access to the Form Change in their Pokémon storage. As of now, it will only work with Furfrou, but the uses will likely become more prominent as the months go on.

Related: All Furfrou Trim forms and how to get them in Pokémon Go

There is a lot of potential for Niantic to use the Form Change in conjunction with Pokémon that have special forms, or multiple slight variations, such as Arceus with its Life Plates and Silvally with its Memory items, both of which change the Pokémon’s typing and appearance.

Regardless of how it might be used later on, here is how to use the Form Change to switch between various forms of select Pokémon in Pokémon Go.

After entering your Pokémon storage menu, you will only be able to initiate a Form Change by selecting a Pokémon that is compatible with the feature. For now, that means only Furfrou is capable of utilizing the mechanic. 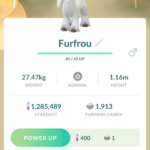 Once you select the Pokémon, there should be a secondary option underneath the Power Up button labeled “Change Form.” It will clearly list the available forms that you have access to and the associated cost, which will typically require a set amount of the Pokémon’s Candy and some Stardust, and ask you to confirm your selection before initiating the change. 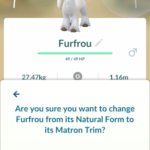 Using Furfrou as an example, changing it from one Trim to another that is available in your region will cost you 25 Furfrou Candy and 10,000 Stardust—a pretty hefty price.

Niantic will likely use the Form Change in more situations and update how it functions as it collects feedback from the player base and continues to release new content into Pokémon Go.