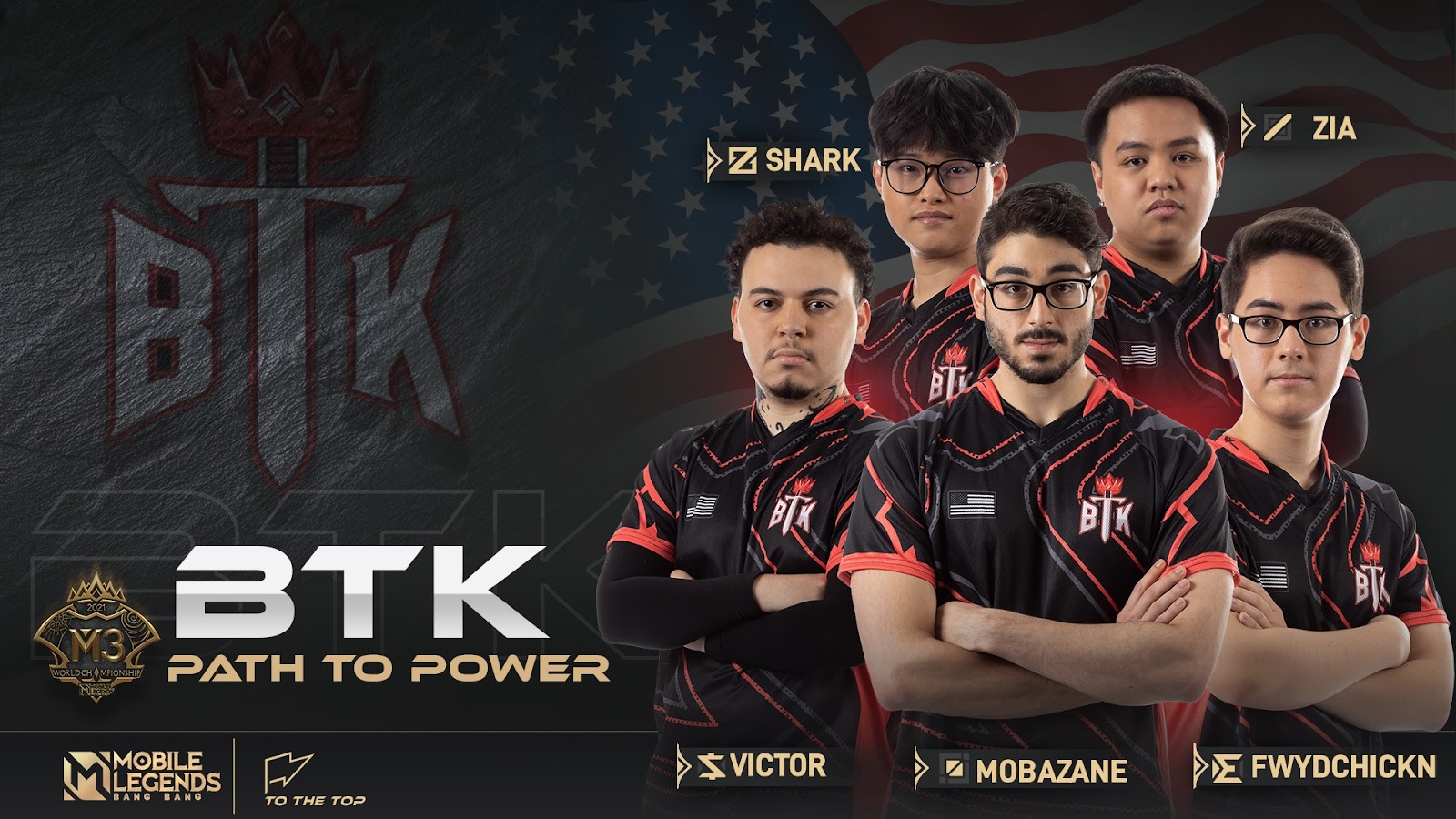 When BTK first descended onto the battlefield against NAVI in their inaugural group stage match on Dec. 8, nobody expected the North American underdogs to achieve third place in the Mobile Legends: Bang Bang (MLBB) M3 World Championship. Without a coach, manager, analyst, or sponsor, the five players had to rely on their own talent and teamwork as they pulled off huge upsets against teams from MPL regions.

The team consists of MobaZane, Victor, FwydChickn, SHARK, and ZIA who are all under 20 years old. While they have been competing together for almost two years, the team met for the first time at the airport as they departed for the M3 World Championship in Singapore.

MobaZane was a former pro player and one of the best marksmen in North America. He even competed with pro player Duckeyy at one point to become the top global Saber. The rest of the team have also been streamers for some time. Having played together for a couple of years, the players developed amazing synergy that was on display as they faced the MPL champions Blacklist International (Philippines) and SeeYouSoon (Cambodia).

Before heading to the M3, BTK dominated locally, having won the MLBB North America Community Cup and the NA Community Tournament. They focused on early-game meta victories and carried this strategy into the M3.

The M3 World Championship was the first international tournament for BTK, and most people didn’t expect the inexperienced team to go very far. Despite being ranked fourth in the Dot Esports’ group C power rankings and facing other hurdles such as time zone differences and travel, the team put up an impressive performance in the group stage and took down NAVI and SeeYouSoon to advance to the upper bracket of the playoffs.

Here, the North American team faced the Filipino champions Blacklist International. Only about two percent of the audience expected BTK to take down Blacklist, but to everyone’s surprise, they pulled off the upset.

“I don’t think [Blacklist International] took us as seriously as they should have,” MobaZane said in a post-match interview.

After this, BTK went on to defeat EVOS SG to advance to the upper bracket finals. BTK have certainly left a statement in the M3 World Championship and have put North America’s name in the global MLBB esports scene as a region to be reckoned with.

The M3 World Championship was the third iteration of the Mobile Legends: Bang Bang’s premium global esports tournament and featured a prize pool of $800,000. A total of 16 teams from around the world competed for a share of the money and the title of world champions.

The tournament shattered viewership records again, achieving a peak of 3,191,404 viewers, according to Esports Charts.

The M3 was held at the Suntec Singapore Convention & Exhibition Center, that seated up to 178 live audience members. The center was established in 1995 and has since become a world-class and renowned destination for hosting large-scale tournaments.