Just like every other addition to the Super Smash Bros. Ultimate roster, director Masahiro Sakurai spent a lot of time working with his team to add dozens of amazing references and throwbacks to Terry Bogard and the Fatal Fury franchise for the character’s release today.

Since SNK has such a rich history with Fatal Fury, The King of Fighters, and many other games, there was a lot of content to pull from for the Smash collaboration. Along with Terry, Mii Fighter costumes, and 50 songs, Sakurai also made sure to give 20 different characters from those franchises cameos on the new stage.

Whether it’s the obvious representatives like Geese Howard or digging into the backlog a bit for Choi Bounge, there’s a little bit of everything for fans of the SNK classics.

All cameos on King of Fighters Stadium in Smash Ultimate:

The adopted brother of Terry, he’s a strong fighter who’s been included in the roster of many SNK titles since the original Fatal Fury in 1991. He’s known as the Whole Body Weapon for his mastery of the Koppouken fighting style.

This is one of the three characters who had a main role in the original Fatal Fury games. He’s well-known for being a comic relief character in more recent installments of the series and is typically called The Young Champ of Muay Thai.

This character is a Hakkyokuseiken master who instructed both Geese Howard and Jeff Bogardin in their training. He’s a wise master who gives advice to Terry throughout the series.

Known as the Emperor’s Right-Hand Man, Kane is the head lackey for Geese Howard throughout the series. He was taken in by Geese off the streets of London and is pretty handy with a Bo Staff.

The main antagonist of the Fatal Fury series, Geese murdered Terry and Andy’s father, Jeff Bogard, and was later defeated during the King of Fighters tournament he hosted. And as Sakurai said, “falling off of buildings is his thing.”

Rock is the biological son of Geese Howard but was raised by Terry after his father’s death. The fighter shown in Smash Ultimate is a younger version of the character that moves and animates similarly to Terry.

The Crown Jewel of Taekwondo, as he’s known in the fighting world, Kim is an early rival of Terry’s who becomes a good friend after their first match. He’s a legendary warrior who’s respected by nearly every fighter in the series.

A boy who aspired to be a higher up in the Yakuza, Yamazaki went into organized crime early as a bodyguard and later developed an insane alter ego after watching his boss get murdered. He’s a popular character who’s usually making a mess of things for the other fighters.

One of the strongest female fighters in the series, Mary is a freelance fighter who does a lot of detective work during the Fatal Fury story. She’s a good friend of Terry’s who teams up with him and his allies several times.

A representative from the Psycho Soldier series, Athena joined The KoF roster as a highly-anticipated character and has stuck ever since. She typically remains as a side character when it comes to plot.

The main protagonist for KoF, Kyo is the heir to his legendary clan and is the focal point of several stories in the KoF/Fatal Fury universe. He has the ability to control fire and enjoys driving his motorcycle around Japan.

The central rival to Jyo, Iori is the heir to the opposing clan and is also a main character throughout the shared SNK universe. Known as the Flame of the End, Iori can also control fire, which is shown in his character movement.

One of the few characters to practice Judo in the KoF roster, Goro is a powerful man who’s a former Olympic gold medalist for Team Japan. He tends to place highly in the story tournaments but frequently disappears from the roster to return to his training.

One of the recurring Korean fighters, Chang was once feared as a violent criminal and is working with Kim to reform himself as a “fighter for justice.” He and fellow convict Choi Bounge tend to make a mess of things, but they side with the good guys in the end.

With a striking resemblance to Freddy Kruger, Bounge fights with clawed hands and rarely sits still, as shown in his animated movements in Smash. He speaks like he’s performing in theatre production and loves to put on a show. 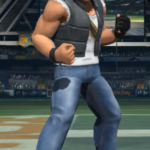 The One-man Army and Tough & Cool are the nicknames given to two of the Ikari Warriors who appear in most of the SNK franchises, including KoF and Metal Slug. They both rarely interact with Terry or any of the other fighters outside of basic story beats.

The main character in Art of Fighting, Ryo is known as The Invincible Dragon and is famous for creating various versions of the Super Special Move concept that’s prevalent in fighting games today. Sakurai viewed him as a must-have inclusion for the franchise for that reason alone.

The first playable female character in Art of Fighting, she’s a bodyguard who has a varied sense of style and fights with mixed styles, too. She tends to try to work honestly before returning to the ring to fight.

The last cameo is Ryo’s sister Yuri, who was used as a plot point, damsel in distress character until she later became a playable fighter. She’s a very outgoing person who uses acrobatic moves during her fights.

Sakurai is a known fan of the older SNK fighting games, even giving fans recommendations based on his own personal experiences during the deep dive into Terry’s character. This love is also reflected in just how much attention he put into pleasing other fans of the classic titles.