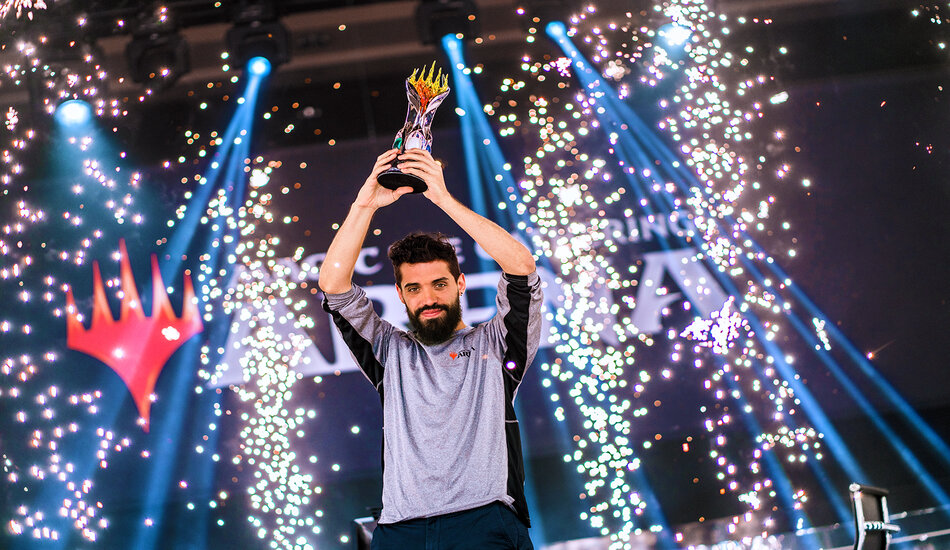 With a $750,000 prize pool on the line, the challengers who worked extremely hard to get a seat at Mythic Championship V (MCV) are ready to tangle on the battlefield with the Magic Pro League players.

Challengers participating in MCV either qualified for the tournament via the Magic Arena Qualifiers or were given a special invite due to previous MTG tournament wins and top play. From upcoming pro players and former champions to streamers and the blue-collar worker, here are the top challengers to watch at Magic’s Mythic Championship V.

Ole “MTGIncomitatus” Andvik is a warehouse manager from Norway who recently returned to playing Magic via MTGA this past year. Playing a version of Brad Nelson’s Bant Scapeshift (Field of the Dead) deck in the Arena Qualifiers, Ankvik earned a seat at Mythic Championship V and a chance to play against the Magic pros he looks up to.

Andvik is playing Bant Golos this weekend, an archetype that over 30% of the field is also bringing to the battlefield.

Running 29 lands and four copies of Golos, Tireless Pilgrim, Andvik is taking a standard approach to the Field of the Dead zombie deck. One slight difference, however, can be found in his sideboard with the two copies of Oko, Thief of Crowns.

And instead of including Time Wipe, Andvik is relying on Realm Cloak Giant for board wipes. The giant doesn’t have trample or reach, but when combined with Kenrith, the Returned King, is a powerful finisher.

Stanislav “StanCifka” Cifka is a Magic pro and former No. 1 Hearthstone player. After taking several years off from competitive MTG play, Cifka returned to the scene thanks to his roommates Ondřej Stráský and Ivan Floch.

Related: Stanislav Cifka’s return to Magic: The Gathering isn’t about getting into the MPL

His return to Magic is unconventional, but it doesn’t diminish his deck-crafting skills. And don’t sleep on Stráský, who also qualified with Cifka during the Arena Qualifiers.

Hoping to dominate the metagame at MCV, Cifka and Stráský are playing a unique version of Bant Ramp. With the goal of playing Nissa, Who Shakes the World by turn three, they also have Oko and Teferi ready wreak havoc as well.

It’s the sideboard, however, that makes their Bant Ramp deck stand out. One copy of Mass Manipulation can shut down Aggro decks like Gruul and Kights in a heartbeat while Wicked Wolf and Tolmir, Friend of Wolves are a deadly combo on the battlefield.

After signing with TSM in March, Kenji “Numotthenummy” Egashira became the first Magic player to join the esports organization. Specializing in the Limited format, Numotthenummy has almost 100,000 followers on Twitch who watch him play via MTG Arena and Magic Online.

Numotthenummy isn’t a stranger to MTG Arena or the pressures of top-level competition. He won the Magic Online Championship in 2017 and has streamed for 365 consecutive days in the past.

Chris “Kavartech” Kvartek is a 22-year-old college student and upcoming Magic player in the pro scene. Kvartek memorized every card in the War of the Spark set and went undefeated in the Limited Draft to earn an invite to Mythic Championship II in London. He also played the Modern rounds like a pro, making it to the top eight at MCII.

His outstanding play didn’t earn him a seat at MCV, however. It was a Mono-Green deck crafted with the help of pro player Robert Lee—a build they created just days before the qualifiers. In an interview with ChannelFireball, Kvartek admits he didn’t have the wildcards to test the deck on Arena, so he and Lee tested it on Magic Online.

The testing binge paid off since Kvartek finished in the top 16 during the Arena Qualifiers and will once again sit across from the best Magic pros in the world at Mythic Championship V.

Kvartek decided to bring Simic Food to MCV, but with a few adjustments to the main deck. Maraleaf Pixie provides an additional ramp while Brazen Borrower is an Adventure creature who can bounce or enter the battlefield via Flash.

Related: Once Upon a Time is the most-played card at Magic’s Mythic Championship V

Mythic Championship V begins this weekend via MTG Arena. The tournament will be streamed from Oct. 18 to 20 on Magic’s Twitch channel.