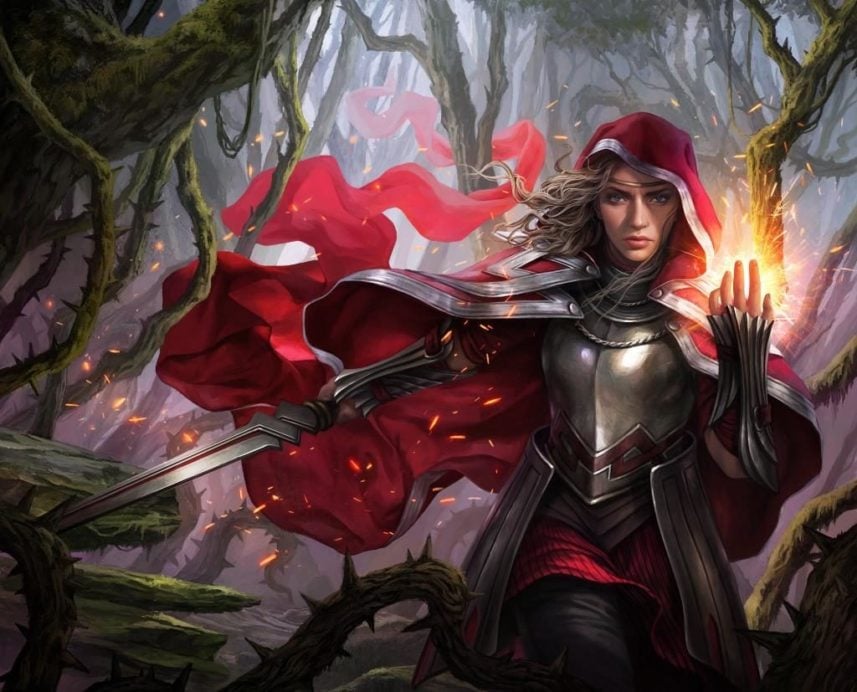 From Dragons and Dwarves to the Magic: The Gathering staple burn spell, playing Red in the Throne of Eldraine Limited format has many benefits.

Mark Rosewater and the MTG design team wanted to give Magic players a chance to go monocolored in the Limited format with the Throne of Eldraine (ELD) set. And while that’s easier said than done, Red is a color worth trying it in.

Before diving into the best and worst ELD cards to play in Limited, there are several honorable mentions worth noting. Bonecrusher Giant just missed the list but is still a solid first pick if nothing else spectacular presents itself. Likewise, with Scorching Dragonfire and Slaying Fire—both burn spells at Instant speed.

Additionally, Embereth Sheildbreaker is an ELD Adventure card to keep handy in the sideboard if you have space for it. And with that, here are the winners in Red.

Embercleave is going to see a ton of play in Standard and it falls just short of bomb status in Limited. But just because it’s not a bomb doesn’t mean it isn’t worth picking up. Embercleave slides into any creature dominant deck playing Red and is guaranteed to wreak havoc.

Robber of the Rich (Mythic Rare)

Another MTG Mythic Rare that will perform well in both Standard and Limited is Robber of the Rich. It made the list simply because of its versatility and ability to steal off your opponent’s library. There are several other Rogue’s in ELD and Robber of the Rich is worth building around as a first pick.

For decks that are attempting to go Mono-Red in Limited, or are Red heavy, Torbran, Thane of Redfell is a bomb of a first pick. Pair him with burn spells and try to maximize every point of damage a Red deck can inflict upon an opponent. Torbran isn’t necessarily the first pick if a deck isn’t primarily Red, however.

Opportunist Dragon 4/3 flyer for four mana. It’s not a bomb by any means but evasion in Limited is worth having this dragon in a four-drop spot. Opportunist Dragon is slightly weak on the defensive side, but it does have the benefit of removing an opponent’s target Artifact or Human. Even if it is for a few turns before it gets removed.

It’s not often in MTG that a late-game one mana spell exists, but Redcap Melee is an Instant—designed for the late game when your opponent isn’t playing Red, and for the early game if they are. For one mana,  Redcap Melee deals four damage to a target creature or planeswalker. But if the target isn’t Red, then the player who casts it has to sacrifice a land.

Toward the latter part of a game, losing a land (when the Instant only costs one mana to play) isn’t that big of a deal. And if your opponent is playing Red, then Redcap Melee gets to fire off early at a substantial threat.

Syr Carah, the Bold is a card that might get overlooked in the ELD Limited format. In a predominantly Red deck, she’s a cantrip powerhouse who can ping for one damage. If paired with Torbran, Thane of Redfelll, she’s a beast.

Thrill of possibility is essentially an improved Tormenting Voice, which was a solid card in Limited and Standard. Thrill is an Instant, however, making it even better and worth a spot on the best Red Throne of Eldraine cards to play.

Not every card listed under worst is a bad card overall. In fact, it’s likely one or two listed here will see plenty of play in Standard Constructed. In the Limited format, however, they are either too weak, don’t work without symbiotic theme and multiple copies (four), or simply aren’t worth the mana cost in a 40 card deck. Here are the ELD Red losers.

Sundering Stroke has the rare chance of being a finisher in a Mono-Red deck. But the chance of drawing it at the right time is extremely low. Don’t be tempted by what it could do and choose a pick that provides more value.

Javier Dominguez looks good as the ELD Fervent Champion and in Standard, this Knight card will prove useful. In Limited, however, it’s not worth the one-drop in Red. And it’s certainly not a top pick.

Irencrag Feat is another Mono-Red based card that’ll do well in Standard but hinders a player in Limited. The cost of kicking it off isn’t worth the payoff. But at least one player in a Limited event will get lucky and make it work. Consistency is always better than dumb luck., though.

In a Standard deck with a sacrificial theme, Claim the Firstborn might be worth it. But in a Limited format, it’s not worth the space to take a minimal card from your opponent. For one more mana, Scorching Dragon provides way more value than Claim the Firstborn ever could.

Equipment spells need to provide value in a Limited deck and Crystal Slipper never had it. Just say no, and move on.

Seven Dwarves will be a terror in Singleton. Not so much in Limited. Consistency over dumb luck again. Chasing the Seven Dwarves in a Draft is foolish. Stick to strategy and Magic fundamentals.

Blow Your House Down (Common)

Blow Your House Down might be a finisher in a rare circumstance, but as a three mana Sorcery spell, it’s just weak. And in ELD, there are only three walls out of 269 cards.

The Throne of Eldraine prerelease runs from Sept. 27 to Sept. 29 with the set releasing early via MTG Arena on Sept. 26. Prepare for tabletop and MTGA Sealed and Draft events with these additional ELD Limited card reviews.